This match was characterized as the buffoon mirror match, but in reality it features two of Magic's funniest big men. Walls is running mono-green Tooth and Nail with some sick Oblivion Stone tech he got from U.S. National Team alternate, Billy Postlethwaite. De Rosa had been waffling between decks before the tournament, but the sheer power of the deck finally convinced Antonino that Affinity was the right choice, and he would prove that in our first Feature Match of the day. 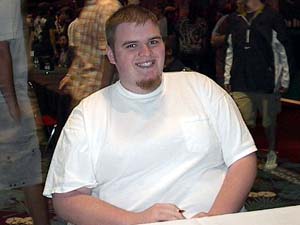 The first game swayed back and forth between De Rosa's explosive start and Wall's Oblivion Stone resetting the board. Unfortunately for Gabe, De Rosa drew a bunch of cards prior to the Stone activation, dropped an Atog and an Arcbound Worker on the recovery turn, and killed Walls from fifteen on the next attack step.

"I'm too stupid to play this deck… too much math." - DeRosa

"It's a good thing you won that first game," noted Walls, "because games 2 and 3 are really bad for you in our testing. By the way, how are last night's burritos sitting with you?"

"Oh my God, I farted all night! Like one time last night I was sleeping, and I woke myself up because I couldn't breathe anymore, the smell was so bad. I can just see my girlfriend saying, 'I told you to lay off the burritos, Antonino.' The burritos were good though," replied Ant.

Game 2 started out with Walls casting Oxidize, Oxidize, Eternal Witness, Viridian Shaman, and then laying his hand of Oxidize, Oblivion Stone, and another Shaman on the board, taunting Antonino and his lone Darksteel Citadel. The big Italian-American struggled to recover some board position, but in the end it was Walls and his avalanche of removal that took the game through a series of two-power beaters and a Stalking Stones. Unfortunately for Walls, he could not repeat such an incredible draw in game 3, and De Rosa ran him over on turn 4 with a combination of Atog beatings and Disciple of the Vault pings. 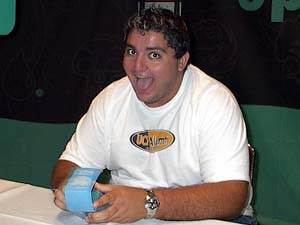 Gabe: "That's the only way he can win games 2 and 3. I can't beat an Atog… all I can do is chump it. I really like our deck though, I think it will do well today."

De Rosa: "I boarded in too many colored cards against him in Game 2, and I couldn't cast anything in my hand, so I boarded some back out to try and beat him fast in game 3. Game 1 is a bye in this matchup. I want to tell the world: Why play a deck in this format that does not contain either the best mechanic ever invented or Eternal Witness? Those are the only choices a good player would make for Block Constructed, so PTQ players should obviously listen to me. I won, didn't I?"