Round 4: Antonino DeRosa vs. David Price 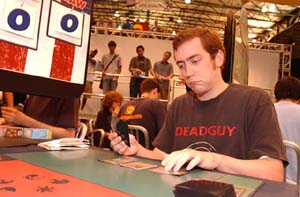 Antonino DeRosa is looking for a breakout finish. He's had top 32s at Pro Tours and at least one Top 8 in a Grand Prix, but he wants the finish that will put his name in everyone's heads – and making the US Team would do just that.

His opponent is Dave Price, a Top 8 finisher in this event last year as the beneficiary of Casey McCarrell's disqualification.

Price – the King of Beatdown – is running a fast red/green deck with Reckless Charge. He has lost twice in the first three rounds to Teferi's Moat – a card he never imagined would see play in this environment.

DeRosa, also 1-2, is running a blue/green threshold deck that some Italian friends of his designed. The deck wins with Nimble Mongoose and Werebear. It also features many Diverts as techy answers to Probe and Deep Analysis.

Price kept an opening hand with no creatures – just land and burn. DeRosa cast Opt on turn one, and a Wild Mongrel – the enemy of burn – on turn 2. Price cast Fire on it at the end of DeRosa's turn, forcing him to discard a Fact or Fiction. Price then untapped and Firebolted the hound twice – DeRosa discarded a Divert to save it from the first, but it fell to the second.

Price's Grim Lavamancer was Counterspelled, and then neither player did anything until DeRosa Fact or Fictioned at the end of Price's turn, netting a Werebear and a Divert.

DeRosa cast the 4/4 Werebear and then added a 3/3 Nimble Mongoose. Price drew another Lavamancer, but DeRosa countered two more burn spells to keep the Werebear alive. Price's single 1/1 couldn't handle DeRosa's seven power of attackers. So much for red/green beats.

Price kept a Forest/Bird/Rootwalla opening hand. He played the Birds on turn one, then the Rootwalla and a Reckless Charge on turn 2 – but no second land.

DeRosa played a Mongrel and blocked the Basking Rootwalla on turn 3, pitching two cards. He then spent the next two turns Repulsing Dave's Bird. Dave couldn't draw a second land to save his life. 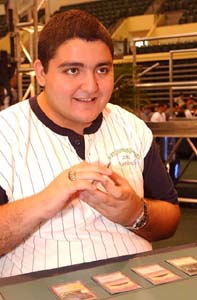 Price eventually added a Mongrel to his side of the board, and discarded two Rootwalla's to it to get some guys on the table. DeRosa played a Werebear and a Nimble Mongoose and things were looking bad for Price.

Price eventually drew a second land – City of Brass. It didn't really help him at that point, as he had pitched most of his expensive spells to the Mongrel. Even though DeRosa had the bigger creatures, he was content playing the control role, and once he played back-to-back Fact or Fictions, Price couldn't recover. The Werebear and Mongrel ran over Price's creatures, giving DeRosa the match.