Round 4: Blink and You'll Miss It

Pro Tour can be a fast-paced place. One second I'm tapping away at something for the blog, the next minute there is a feature match that needs covering, starting one minute ago. So here goes!

By the time I got to the table, these two French gentlemen were already hard at work. The first game was over no more than a minute after I got to there, when Gabriel Nassif wrathed away Olivier Ruel's Paladin en-Vec and Teysa, Orzhov Scion and then followed it up with a Loxodon Hierarch.

While sideboarding, both players chatted happily with each other about (I can only assume) high art, garlic and the fact that they get the World Champs on their home turf next year. How lucky!

So I actually had something to write about, I tried to figure out what each player was sideboarding for this battle. Nassif wavered for a bit before deciding to compliment his green/white/black control deck (we've taken to calling it the "Loxodon Hierarch deck," you know, because it is) with even more removal in favor of his Cranial Extractions, Faith's Fetters and the hefty Angel of Despair. Ruel on the other hand was not shy about the sideboard strategy for his aggro control-esque Orzhov deck.

"I just took out this (fanning his Plagued Rusalkas, Jittes and Paladins) for discard *shrug*," Nassif said. 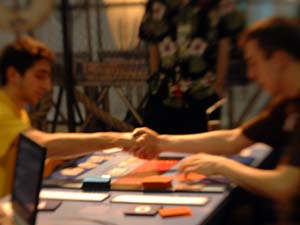 After shuffling up for Game 2, Olivier pondered his hand for a while before his eyes suddenly tried to leap forward out of his head. He flopped his hand out at Nassif to show that he came this close to keeping a one-lander, where that solitary land was an Orzhov Basilica. I'm sure there will be someone out there this weekend a little less observant that Ruel who will undoubtedly shoot themselves squarely in the foot thanks to some frighteningly similar artwork.

However, despite mulliganing into some lands for this game, it seemed as though Ruel fared no better than if he had chosen to run with that lone Basilica. Nassif (ab)-used Phyrexian Arena to charge out ahead of Ruel, crushing a fair proportion of his deck beneath a Night of Souls' Betrayal and a flurry of removal spells.

As photographer / artiste / man about town Craig Gibson swooped in to immortalize this match, Ruel expressed disappointment that he hadn't shown up earlier, when it wasn't so plainly obvious that he was out for the count. Still, if Craig hadn't turned up when he did, we wouldn't have that cool shot to the right for you all.