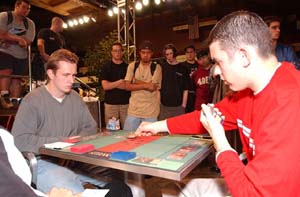 It's no surprise to see these two combatants so close to the big money. Benafel's been a regular recipient of Pro Tour dough for some time now. A member of the infamous Team AlphaBetaUnlimited.com (ABU), Benafel has shown himself to be a master of Limited formats. Opposite him is last year's Player of the Year, Bob Maher, Jr. A Masters win would go nicely with his Pro Tour Champion title.

Many believe that the winner of this match will be the eventual champion, and it's not surprising looking at their decks. Benafel scored what seems like all the red at the table. Two Firebolts, two Anarchists, three Flame Bursts and the backbreaking Shower of Coals aren't even the full extent of his power cards.

Maher, meanwhile, isn't exactly playing a big pile of "come beat me up". His deck runs like a blue-white dream, with multiple Kirtar's Desires, Shelters, Syncopates, Mystic Crusader and Pilgrim of Justice to frustrate Benafel's creatures, and a pair of monster bombs, Kirtar's Wrath and Wayward Angel. Maher said that in his the matchup against Dave Price, he did not lose a single game.

Maher lost the die roll, and so had to play first. The card disadvantage was compounded when he had to mulligan. He started the beats with a turn-two Patrol hound. It brought Benafel to sixteen while his missed his fourth land drop.

Benafel burned Afflict to find a land, then played Innocent Blood to remove the hound. Maher bounced back with Aven Flock. Its pumpable toughness would pose a problem to Benafel's red removal. Fortunately, Benafel had a fifth land and Thermal Blast to destroy it before Maher could untap.

The rest of Maher's hand had a defensive bend. Dreamwinder came out to hold the ground, and Maher had Second Thoughts, Syncopate and Kirtar's Desire in reserve. Benafel's wealth of removal came to play again, as Ghastly Demise took out the Dreamwinder. The pace of the game was glacial.

Limestone Golem appeared on Maher's side, and caused Benafel to enter the think tank. Emergining minutes later, he Firebolted the Golem, then got it back with Anarchist for a repeat performance. Maher's Second Thoughts took care of it when it swung next turn. Benafel played his second, yet again returning Firebolt. 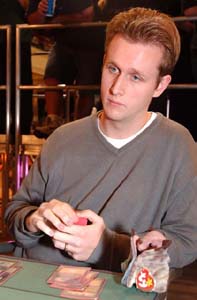 Maher took care of the Anarchist with Kirtar's Desire, but had nothing to dispatch Barbarian Lunatic. Each had nine mana on the table. Maher made an Aven Fisher. Benafel answered with a second Lunatic and passed it back. Maher didn't budge. Benafel untapped and played Innocent Blood, losing his pacified Anarchist and coming through for four.

Mahers next play of Mystic Zealot drew a look of consternation from Benafel, as Maher had Threshold. Benafel swung with both his Lunatics, letting one die at the hands of the Zealot and knocking Maher to twelve. Maher fell to ten from Firebolt, saying "That can't be a good sign.". Benafel tried to flash it back, but Maher Syncopated.

Both players passed their next turn, waiting for the other to move. Finally, Maher drew Wayward Angel, and decided it was time to strike. He swung with Zealot, then dropped Mystic Crusader and Wayward Angel. Benafel whistled. "Gigantic", he said, "You had a plan, there, didn't you Bobby?". He Thermal Blasted the Zealot, then untapped.

Faced with what seemed to be the climax of the game, Benafel turned on the concentration. He seemed to formulate and dismiss a number of plans. After receiving a warning for slow play, he played Shower of Coals to deal four points to Maher, then Volcanic Spray to deal an additional point. The life totals stood twelve for Benafel, five for Maher.

Maher untapped and thought during his upkeep. With just a pair of Shelter in his hand, he would die to the Angel during his next upkeep if he did not draw a creature. He burned both Shelters on the Angel, but drew only Kirtar's Wrath and plains. He sacrificed the Angel, drew another land, and swung with the crusader.

Giving it back to Beafel, Maher jokingly asked if Benafel had Pardic Firecat. Benafel drew and handed the turn back. Maher found Pilgrim of Justice waiting for him, and with that seemed to have the game firmly in his grasp. Two turns later the first game was his.

Benafel chose to draw again for game two. Maher stared at a hand of plains, Kirtar's Desire, Patrol Hound, Angelic Wall, Shelter, Syncopate and Dreamwinder for a full minute before choosing to keep. He ripped a plains like the pro he is, and dropped Patrol Hound. Benafel trashed it with Firebolt. Finding no third land, he played his Wall and gave it back. Benafel raised his eyebrows. 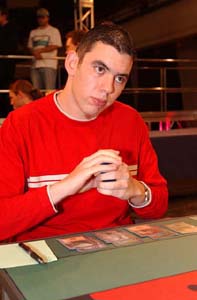 Benafel tested the waters by sending in his Lunatic. When Maher blocked, he decided to wait on destroying it, playing out Halberdier instead. Maher cycled his Shelter, and drew, but found no land. He sighed as he played Kirtar's Desire on the Halberdier.

Benafel kicked it into high gear, destroying the Wall after combat with Flame Burst, doubling up on Lunatics, destroying Maher's lone Cephalid Looter with Ghastly Demise. Scorching Missile had Maher at six, and his only defense was Auramancer. Recoup on Scorching Missle sealed the deal.

Game three was Maher's chance to draw first. Again he stared at a one-land hand. He couldn't in good concience keep it, but had to see what would have happened. Four of the top five cards were land. His next six were all lands, and he chose to keep.

Three of his next four draws were also lands. The Patrol Hound he did get got Firebolted. Benafel, meanwhile, made Barbarian Lunatic and started swinging. Maher drew Second Thoughts to take it out, but Benafel spoiled his card drawing by sacrificing the Lunatic to damage itself.

Maher drew Thaumatog. Benafel showed him Shower of Coals, then Ghastly Demise, and attacked for the win.