Round 4: Bob Maher vs. Darwin Kastle 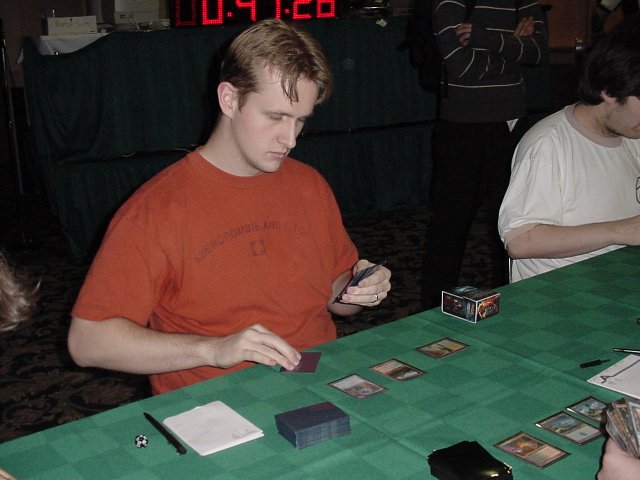 Two of the biggest names in Magic met up in the mountains of Denver to duel it out. Bob Maher and Darwin Kastle have faced each other on only a few occasions; at World's a couple of years back Bob's infamous Oath deck defeated the Counter Sliver strategy so popular with the Your Move Games players, at PT LA during Tempest Block constructed, Darwin returned the favor winning with his U/B Living Death deck over Bob's mix of Shadows and Counters.

Both were sporting 3 shiny byes, and were well prepared to face a metagame of control on control. Bob was with Blue/White/Red control, using a mix of Goblin Trenches, Urza's Rage and Prophetic Bolts to kill off an opponent while using a mix of counter magic and board control elements, such as Absorb, Repulse and Exclude. Darwin was packing his trusty Blue/Black/Red control deck, reminiscent of his well known draft strategies, which uses a mix of Undermines, Fire/Ice and Urza's Rages for the kill.

The first game started off well, with Darwin winning the role and both laying dueling come into play tapped lands. By the third turn, both had 3 lands, and it seemed as if they both had a solid mana base, but when control plays control, 3 lands is nowhere near enough. Bob stopped laying lands after turn 3, and Darwin exasperated the problem by Recoiling Bob's Coastal Tower during his end step. This cleared the way for a Lobotomy from Darwin which resolved, revealing a hand of 3x Fact or Fiction, Repulse, Prophetic Bolt and Fire/Ice. The FoF's get removed from game and the rest is rather academic. Over the next 8 long turns, Darwin proceeds to resolve 4 Fact or Fictions of his own, getting a 4 for 1 split on each, but since the 1 was always an Undermine, Darwin was quite happy to take just one card. While Bob tried to fight back with Goblin Trenches, the multiple Undermines and pain taken from Bob's mix of Shivan Reef and Battlefield Forges dropped him to a lethal life total, 10. Darwin calmly laid out his 12th land and proceeded to kick up a Rage and take the first game in short order. 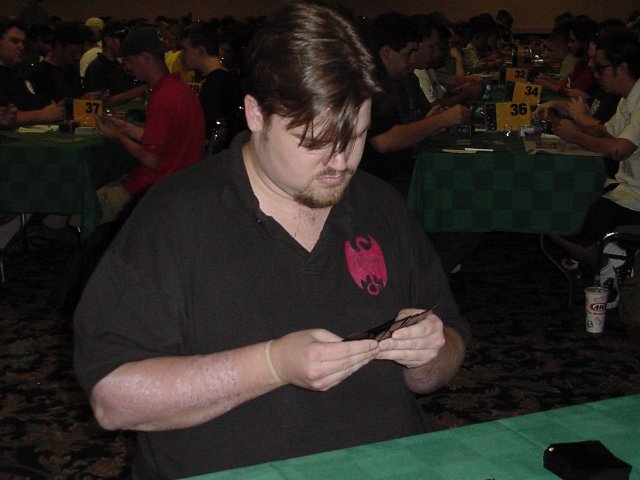 If the first game was all about mana, the second was about card advantage. Darwin capitalized on Bob's slow land start, Voiding for 3 (getting Exclude, Absorb and 2x Repulse), then Voiding for 4 getting a freshly sideboarded Lightning Angel and Fact or Fiction. Darwin then resolves a Lobotomy on the 11th turn, (he has not missed a land drop in both games so far), it reveals a bare Shivan Reef, which he chooses not to remove the 4th copy of from the library. Bob's next draw reveals...the Shivan Reef Darwin choose not to remove. The game ends on the next turn with Darwin firing off a pair of kicked Rages.

When asked after the match both players joked that creatures truly have no place in the format when you can just kick unstoppable Rages to the dome.