Round 4: The Book of Chroniclers

This round saw a battle of the 3-0s, blue-based control both. U.S. National team member Luis Scott-Vargas came to the tournament with a deck also being played by 3-0 teammate Paul Cheon one feature match over. Opposing this American's rampage is Masahiko Morita. Widely considered excellent, Morita also has the dubious title of "the best Japanese player that doesn't make a Japanese Top 8." A mouthy nickname, and it doesn't particular bode well for the local in this match. Scott-Vargas and Morita exchanged pleasantries but, with the language barrier looming, settled into a quiet match. 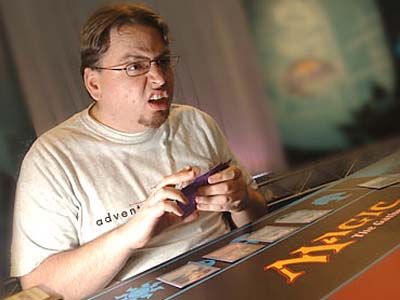 Luis Scott-Vargas: You wouldn't like him when he's angry.

Masahiko, with a deck choice showing utter contempt for the Legions of Teferis being summoned this weekend, began with a suspended Ancestral Vision and aligned it with a suspended Riftwing Cloudskate. Luis began with a Sulfur Elemental, which traded with a Morita morph, and resolved Cancel against another of Morita's facedowns. Both the Ancestral and the Riftwing Cloudskate resolved, although Scott-Vargas attempted to recoup a little advantage with his suspended Aeon Chronicler. The Chronicler did provide a card at the next upkeep, but Morita's Dismal Failure snatched it right back. Luis attempted to resolve a second suspended Chronicler on the next turn, but Masahiko's Teferi kept it AWOL. Luis, un-tired of suspending Aeon Chroniclers, suspended his third and fourth, all the while looking for ways to kill the Legendary Human Wizard. Luis's Lightning Axe was an attempt, but Masahiko quickly retorted with a Cancel. Morita made the fun play of suspending his own Chronicler at the end of Luis's turn (thanks to Teferi), prompting the American to pack it in.

As in the first game, Morita began with a suspended Ancestral. This game saw a slight shift for Scott-Vargas' plan when he resolved a morph and began to enhance a Dreadship Reef. For his part, Morita was content to lay lands and decrease the pips on the Ancestral. The first test came upkeeps later, as Scott-Vargas attempted a Dismal Failure on that Ancestral Vision. Morita, with an eye for irony, played a Dismal Failure of his own. Luis let out a sigh as he pulled out an abacus to figure his card disadvantage, yet managed to stem the tears by flipping up Brine Elemental. Morita shrugged and played a second untapped land to suspend a Riftwing Cloudskate. And just like that, Scott-Vargas took over. Brine Elemental attacked again, followed by a second morph that turned into Vesuvan Shapeshifter that turned into another Briney. Masahiko drew his card, looked at the board and began shuffling for game 3. 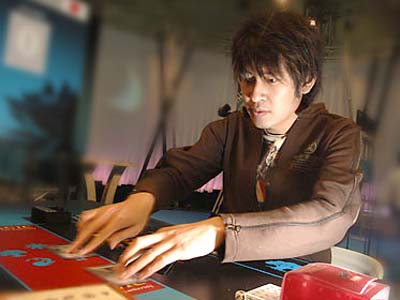 Unfortunately for the Japanese player, this game was far less interactive. Scott-Vargas immediately began to pull ahead in the critical mana race via Prismatic Lens, a charging Reef, and an opponent who missed his fifth land drop (twice). Masahiko did eventually find the land, but an attempted Teferi, Mage of Zhalfir merely gave Scott-Vargas's Draining Whelk a very good meal. Morita tried to get back in it with a suspended Aeon Chronicler, but Luis tapped everything for a main phase Mystical Teachings to find and play Teferi. With Aeon Chronicler locked out, Morita quickly drew his card and extended his hand in congratulations. Luis shook the hand, wished his opponent luck, and walked away a remaining member of the dwindling undefeateds.