Round 4: Brian Davis vs. William Jensen 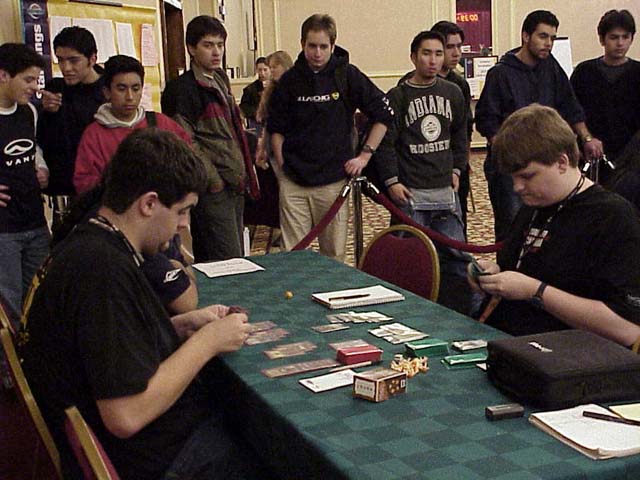 These two players are playing the exact same deck in the tournament: Dark Domain. Originally developed by Brian Kibler, the Dark Domain deck relies much more heavily on swamps, and brings in black powerhouses like Pernicious Deed. While the two players are both of extremely high caliber, Jensen is sporting a bit of tech in his sideboard: a pair of Benalish Emissary to tear away the precious land in this matchup.

The game started slowly, with the usual posturing to build the Domain on both sides. Both players knew the other's decklist exactly (they had hashed over the individual card choices before the tournament). Things became difficult early on for Davis. A Fact or Fiction revealed the deck's lone Plains. Jensen jumped on the opportunity, splitting the piles into Plains or everything else. Davis took everything else (including an Allied Strategies and a Void), managing to push the Void through in a brief counterspell war a few turns later. He took out an Allied Strategies from Jensen's hand and pressed on with an Allied Strategies for four on the following turn.

Davis tried to Restock on the next turn, but was one mana short of paying for an Evasive Action from Jensen, while Jensen could easily afford to pay for the Evasive Action that Davis held. After failing to resolve the Restock, Davis put that precious extra mana into play, and drew another 4 cards with yet another Allied Strategies.

Things certainly appeared difficult for Jensen, who managed to get off a Fact or Fiction, but had to contend with one more Allied Strategies for four from Davis. Despite this, Jensen appeared incredibly confident, beginning to jibe Davis about how impossible it was for Davis to win now.

Reaching the thirty-minute mark, and not yet done with the first game, things started getting more difficult for Davis. While he had drawn a significant number of cards, his lone Plains and Restock were both in the graveyard, and a number of powerful spells in his deck would be unplayable without the help of Chromatic Spheres. Wisely, Jensen began to counter them, keeping Davis off of his white mana. 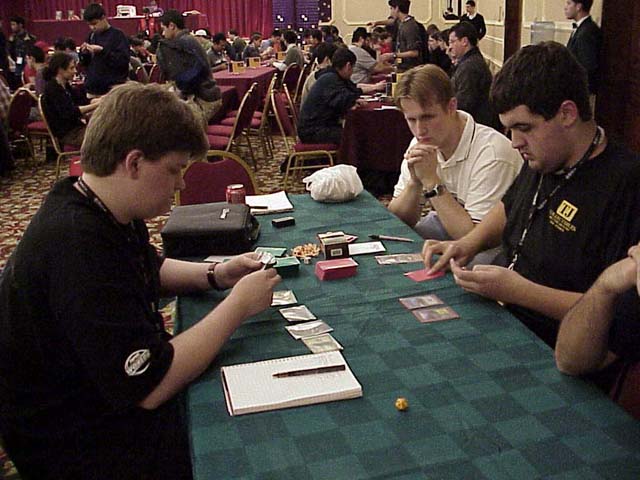 With only a few spells left in his library after all of the card-drawing, Davis conceded to try to salvage game 2. Both players bring in the similar set of cards, including Lobotomy and Gainsay, but Jensen also had the Emissary to help out the matchup even more.

This game starts well for Davis, where he comes out of the gates with turn four and five Lobotomy, knocking out Gainsay and Allied Strategies, respectively. Jensen comes back on the next turn with a Lobotomy of his own, taking out Ordered Migration, leaving the helpless Davis with only a single Spiritmonger for the kill.

"I don't know. They're pretty good for me," responded Jensen. "Each of these is knocking off at least thirty seconds from the clock for me. Tick-tock!"

Jensen's comment about the clock is right. Most of the play is fairly meaningless unless Davis can get to his one Spiritmonger. With less than a minute on the clock, Davis drops a Legacy Weapon which dies to Jensen's Void, followed by a turnabout, with Davis using a Void to kill Jensen's knew Legacy Weapon.

A last-ditch Allied Strategies for five cards fails to get Davis a Spiritmonger, and he concedes as the clock runs out.