Round 4: Brian Kibler vs. Peter Szigeti 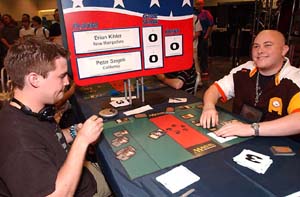 You might remember Peter "PTR" Szigeti as "that jerk" or "the guy in the pimp coat at last year's Nationals". Going into this year's event he promised his wardrobe would feature something even better. Not more outrageous, that might not be possible, but better. He didn't disappoint. Having smashed the Southern California Regionals with Elves, he came into the room today with his plaque on a chain around his neck. It was truly something to behold.

This round he faces Brian Kibler with both of them sitting comfortably at 3-0. Kibler is no stranger to the spotlight, though every year he seems to fall victim to "The Kibler Curse": The moment he tells the press how good his constructed deck is, he and anyone playing it starts to tank. So far he's refusing interviews. Both he and PTR agree that they have two of the strongest decks at the table. PTR has bombs like Eternal Dragon, two Specters (one Silent and one Hollow) and Decree of Pain, while Kibler's deck is a single-minded mono-black killing machine.

"Get in there!" – Brian Kibler

He opened the match by raw-dogging his Skinthinner for beats.

"This guy kills, what, one guy in your deck?" – Brian Kibler

Szigeti bounced back with Consumptive Goo, and declined to block when Kibler's zombie came calling. Kibler had to swampcycle his Twisted Abomination to get his third land into play, and was done. Szigeti hit and made a Nantuko Husk. Kibler hit back. Szigeti let it through. Kibler Swatted the Goo before it could get busy. Szigeti cycled his Gempalm Polluter and beat. Kibler returned fire and added a Husk of his own.

Finally Szigeti found a real threat: Corpse Harvester. Kibler heedlessly swung in, trading his Skinthinner and a post-combat Crown of Suspicion for the zombie-machine. He added an Invoker to the table. Szigeti came down with another biggie, this time Noble Templar. 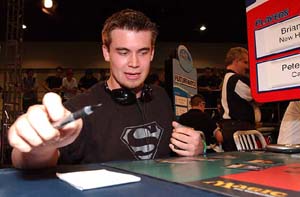 Kibler decided to bash through, suiting up his Husk with Clutch of Undeath to hit for five. Szigeti fell to nine. He hit back for three with his Templar, then dropped Goblin Turncoat, Reaped the Graves for Goo and Polluter, and played his Goo. His attention was momentarily caught by his nameplate.

"Can I change it from California to Awesomeville?" – Peter Szigeti

Kibler played a face-up Cutthroat and served with his Husk. Szigeti tripled up with Turncoat, Templar and Husk, letting Kibler trade his two other zombies for Szigeti's Templar and Turncoat. He gave it back to Szigeti, who Goo'd for one, hitting for four, then played a face-up Cadaver. Kibler was at 6. He hit back and played Tendrils of Agony, to make the scores eight to five.

Szigeti untapped, cycled his Polluter, then played Embalmed Brawler, Goo'd for one, and smashed in for the win.

"This is the strangest decision I've had to make. To Revival, or not to Revival?" - Peter Szigeti

He couldn't bring himself to take it out, though, so they were soon on to Game 2. While shuffling up, the two discussed their draft, and how one drafter's outrageously bad picks had worked out for him in the end.

"This is my theory, that the dumber you are, the more things fall your way." – Peter Szigeti

Kibler chose to draw for Game 2. Szigeti got on board with a morph after plainscycling his Templar. Kibler played a morph of his own, and blocked Szigeti's. Szigeti flipped over Thrashing Mudspawn, hoping to catch Zombie Cutthroat, but it was only Infernal Caretaker. Kibler replaced it with Zombie Warchief. Szigeti's only rejoinder was to hit for four and make a mediocre Spined Basher.

Kibler spent his fifth turn on a discounted Aphetto Vulture. Szigeti gamely rammed his troops into it, sending it back to the top of Kibler's library, and losing his Mudspawn for three more damage. He made another Basher. Kibler replayed his Vulture, and Szigeti was happy to do that same dance again. This time, though, he had Lingering Death for the Warchief and a Hollow Specter.

"You're gonna love this." – Brian Kibler 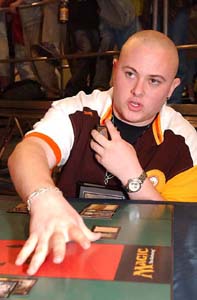 Kibler untapped and put Crown of Awe on his Warchief.

"Those are beats." – Peter Szigeti

Szigeti held back on six lands. Kibler dropped Clutch on the Hollow Specter. Szigeti made the best of a bad situation, using Cruel Revival to get back a zombie, but it didn't matter. He didn't have a way to stop the Vulture.

Szigeti remained impassive as he showed yet another plains, and a morph. Kibler showed him Prowling Pangolin. Szigeti got the swamp just when he needed it, dropping Lingering Death on the Pangolin, as well as another morph. Kibler hit for six and played Gempalm Polluter. Szigeti charged in with his morphs, but Kibler chose wisely, sending Haunted Cadaver to the bin and taking two. Szigeti cycled his Dirge of Dread and had no play.

Kibler hit for four and dropped a morph and Nantuko Husk. Szigeti played one of his own. Kibler sent his crew, and Szigeti blocked to salvage his dwindling life total. Kibler's six swamps and Shade's Breath made sure that any decision was the wrong one. Szigeti was left at five life with no board.