Round 4: Chris Benafel vs. William Jensen 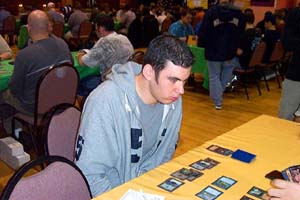 Chris BenafelI got to watch Benafel build his deck this morning, and now he finally put it to the test against Baby Huey's 4-color deck.

Very little action early in Game 1; Jensen cast Rites of Spring, discarding three lands on turn 3, while Benafel cast a Skywing Aven. Jensen answered with an Aven Fisher, and after blocking the Aven, Jensen used Gravedigger to get the Fisher back.

Benafel made a Dreamwinder, and sent it in the following turn after Jensen had cast a Psychatog. Jensen blocked and discarded an Arrogant Wurm, and paid his last three mana to put it into play.
After Jensen removed two cards in his graveyard to make the 'Tog trade with the 'Winder, Benafel used Waste Away to regain some card advantage.

Huey looked to make the game a race, and swung in with the Gravedigger and Wurm, hitting Benafel for 6. Benafel looked to put a hurt on Huey, and sent the Dreamwinder back, but a Vivify from Huey ensured that Benafel would get no more than a Forest for the 4/3.

Benafel was in a tight spot as Huey continued to lay threats; Aven Fisher made a triumphant return and a Dirty Wererat on threshold put Huey ahead for good. He finished off Benafel with a Morbid Hunger to Chris's head. 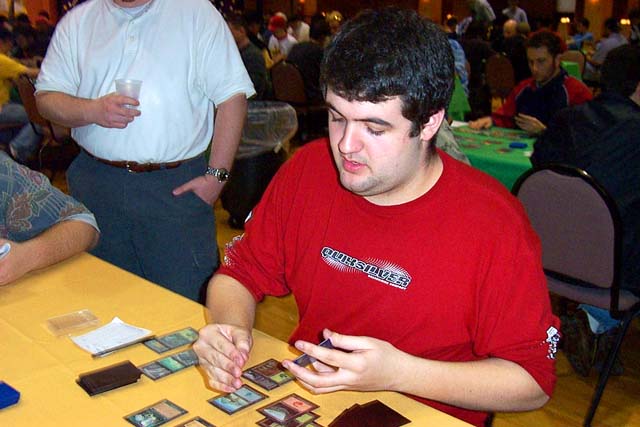 William "Baby Huey" JensenBenafel, looking to exploit Huey's presumed mana weakness in four colors, decided to draw in the second game. Huey dropped a Squirrel's Nest and then got his Looter Butchered.
Benafel went on the offensive quickly this game playing a Whispering Shade, but Huey stopped the Swampwalker dead in its tracks with a Thermal Blast on his own turn.
Huey continued his assault on Benafel's creatures with a Morbid Hunger Butcher, getting his Looter back.
At the end of Benafel's following turn, Huey Looted and put Arrogant Wurm into play.
Benafel made a game of it, casting Gloomdrifter to kill three squirrels and the Cephalid Looter.

Childhood Horror from Benafel put Huey on a fast clock, and even after flashing back the Morbid Hunger, Benafel had a Sickening Dreams to finish off Huey.

The third game was rather anticlimactic with Huey taking a mulligan and drawing many lands, while Benafel went into the red zone often with a fourth turn Whispering Shade and Aven Windreader the turn after that. Huey pounded on his deck, looking for Shower of Coals, but it was not to be found.