Round 4: Chris Pikula vs. Danny Mandel 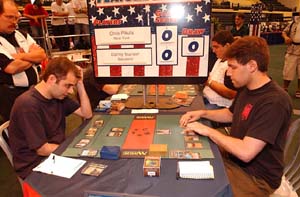 Danny Mandel sat down for his round 4 feature match against Chris Pikula excited, as he explained, because "I've heard you're good times." He was right ... Pikula is definitely good times. It's hard to capture his energy and his timing in print, though, so this match may not be as much fun for you as it was for me. Sorry 'bout that.

Pikula spent the early turns of game 1 trying to figure out what he was playing against. Mandel is just running a Psychatog deck, but it was a bit hard to read that because he led with a Sulfur Vent. Pikula played out a Rootwalla and a Mongrel and commented that "Historically, little beaters are good against strange decks." Mandel played out a 'Tog, though, and Pikula didn't seem as happy now that he knew what was up. The good news, for Chris, was that he had three Roar of the Wurms in his graveyard. The bad news was that all three of his 6/6 tokens got Recoiled. "How embarrassing." Ever since The Man decreed that Psychatog should run Recoils, they've been showing up more and more. Everyone's attitude seems to be something like "Well, hell, if Kai says they're good who am I to question him?" Against Roar of the Wurm, by the way, Recoils are very, very good. Pikula found himself with no hand and nothing in play but land and a couple little beaters. It was all over but the Psychatog math. Game 2 was pretty cool. Both players opted to play draw-go for several turns and each let the other play and flashback a Deep Analysis. Pikula got Compulsion into play and that gave him a pretty big advantage. Not only was he able to get rid of awful midgame cards like Careful Study, but also he got to play an Arrogant Wurm during Mandel's end step. Mandel went for Fact or Fiction as a response and Pikula let it happen. Mandel netted Counterspell, Nightscape Familiar, and Engineered Plague and then pointed the Counterspell at Arrogant Wurm. Pikula countered and got to untap with Mandel down to a lone Underground River. Pikula decided to go for it. He tapped out to play one Deep Analysis and flash one back. He then discarded his entire hand to Wild Mongrel, pretty much asking Mandel "Ghastly Demise or no?" Mandel did not have the Demise, and thus couldn't kill the Arrogant Wurm and thus the Wurm plus the Mongrel dealt exactly the 13 Pikula needed to send them to game 3.

(Pikula actually could have played around Ghastly Demise by keeping a Circular Logic and having mana untapped if he had discarded the Analysis to his Mongrel and then flashed it back, but he forgot what his plan was halfway through and screwed up by tapping four for the second Analysis. Mandel did not have the Demise, though, so it didn't matter.) 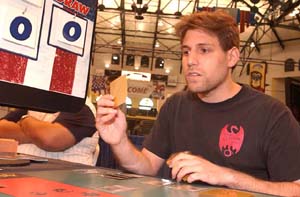 Mandel's Nightgscape Familiar allowed him to take the early lead in game 3's battle for card advantage because it made his Deep Analyses a net total of two cheaper. Pikula had Compulsion again, but he started missing land drops on turn 3 and wasn't able to take full advantage of it. Mandel had drawn 8 cards before Pikula got a fourth land and Mandel was ale to start attacking with his Psychatog already. Pikula had to take a hit while at 13 and that meant Fact or Fiction killed him. All he could do was frown, having lost a matchup he believed to be very much in his advantage.