Round 4: Christoph Lippert vs. Pierre Malherbaud 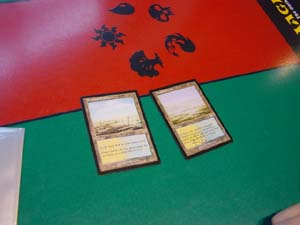 Both of these are accomplished pro players. Christoph Lippert from Germany has multiple GP top 8 appearances although he's been a little quiet of late. Two time French national champion Pierre Malherbaud has a very solid record on the Pro Tour and won GP Naples earlier this year. He's playing Suicide Black while Lippert is running a crazy three-color deck.

Malherbaud won the die roll and elected to go first. His first turn Duress revealed Lippert was playing an unorthodox deck as he was shown two Duress, Whipcorder, Parallax Wave and Vindicate. Duress took the Vindicate and was followed by an Unmask taking the Whipcorder. Lippert's return Duress missed as did the second. Malherbaud's hand was empty by turn 3 as Dauthi Slayer was followed by Carnophage and Skittering Skirge. Lippert dropped a fat Negator to give him a chance of racing only for Malherbaud to rip a Diabolic Edict off the top to deal with it.

The next turn was a little comical. Lippert cast Brainstorm and then dropped a sac land to shuffle the cards back into his library. As Lippert picked up his deck Malherbaud pointed out that the land in the graveyard was a Skycloud Expanse and not a Flooded Strand. An understandable mistake as the cards look very similar.

The situation was resolved with a warning to the German as the order of the library had not been changed. The game was allowed to continue and stuck on one life Lippert began to mount a comeback as the Parallax Wave sucked Malherbaud's attack force out of the game while a Negator started hitting back.

The Wave ran out but by which point Malherbaud was also desperately low on life. Lippert kept finding creatures to back up the Negator. Malherbaud got his creatures back but could only scoop as the Negator could trample through for lethal damage. 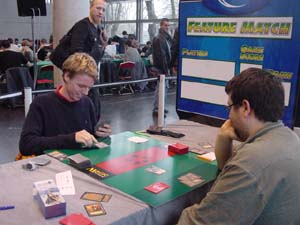 Malherbaud started strong game 2 with Duress and Unmask plucking a Vindicate and Meddling Mage out of Lippert's hand. He followed it with a Slayer and then a Nantuko Shade while Lippert summoned a Negator to try and keep up.

Cabal Therapy missed on Parallax Wave but it did reveal an Exalted Angel in Lippert's hand, forcing Malherbaud to sac the Slayer and flashback the Therapy to get rid of it. The other cards were two land and a Brainstorm.

The Brainstorm proved amazing for the German as suddenly the board changed from Negator vs. Nantuko Shade to Ramosian Sergeant, Spectral Lynx and Negator vs. Nantuko Shade. With no cards in hand Malherbaud was in real trouble. He drew a Dauthi Horror, which wasn't enough. Lippert summoned another Ramosian Sergeant and the Frenchman conceded knowing Lippert could start pulling Whipcorders from his deck, nullifying his attack while the Negator attacked unopposed.