Round 4: Dave Williams vs. Danny Mandel 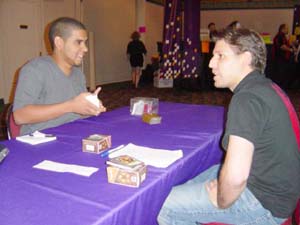 When Dave Williams was suspended from the DCI following his disqualification at World Championships last year, many believed his career as a mage was over. A year is a long time to go without playing at the highest level, and without the incentive of the next big event, it's hard to keep in practice. Magic Online has gone a long way to keeping his ring rust at bay. He's knows he's got a lot to prove, and he's eager to do so.

His opponent, Danny Mandel, was in his former days something of a nemesis to Williams. Twice before they had crossed swords, and both times Mandel had emerged the victor. The so-called Junior Member of Team Your Move Games is in the hunt for some gold to bump him to upper management.

While shuffling up for the match, the two discussed their situations for the upcoming Pro Tour - Boston. Williams, of course, needs some serious leverage if he's to get a Pro Point invitation, and needs teammates who combine to forty-eight points. Needless to say he'll probably be skipping Boston. Mandel, with twenty-one, is looking for a pair of his own, recently having lost his previous teammates.

Mandel got things going with style, Studying into a pair of Rootwallas. Williams answered with swamp, and watched as Mandel kicked it up. Mental Note turned over nothing exciting, but a second Study got Acorn Harvest and Roar where they belong. Williams tried Mesmeric Fiend and liked what he saw: three lands. Mandel swung in and traded for the Fiend. He flashed back his Harvest.

Williams played it cautious. Crypt Creeper took down the Roar. Mandel mashed him for five, leaving him at twelve. Here, Williams manastumbled, missing his fourth drop and playing just a Nantuko Shade with one mana up. Mandel struck again. He Noted into nothing during combat, losing a squirrel to the Shade and dropping Williams to eight. Mandel still had nothing to add. 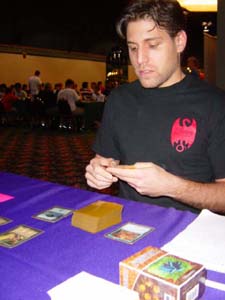 Williams ripped swamp and threw down Butcher on the Rootwalla, stabilising. Mandel was not to be outdone, busting out Grizzly Fate for the full four bears. Williams managed another Butcher, but it wasn't looking good. Mandel flashed back his Fate, and with Centaur Garden on the table it was all over.

Williams brutalized his deck with lightning shuffles. It repayed him with an unaccpetable group of seven cards. His next six he turned face up on the table in front of him: A swamp flush. He stuck on five.

"This one's done. Best save some time and go to the bathroom." - David Williams

Mandel took a sympathetic mulligan. He stopped at six. He opened with another Careful Study into Rootwalla. Williams Fiended him on turn two, and saw both Bearscape and Squirrel Nest. He took the Nest. Mandel hit for only one, but hadn't ripped a Mongrel. Williams took this opportunity to Fiend away the Bearscape.

Again Mandel fired for one, and this time he did have the Mongrel. All Williams could manage was Ichorid. Careful Study put Wonder in the graveyard and Williams on a serious clock. Slithery Stalker cut back on the Rootwalla beats.

But Mandel was far from finished. Werebear hit play and threatened still more damage. Williams played out his hand of Crypt Creeper and Nantuko Shade. He waited for Mandel to make his play, biting the nail of his thumb. Mandel hit for two with his Mongrel. Williams drew, frowned, and held his ground.

Mandel thought hard before turning his men sideways, Centaur Garden keeping things safe. The Creeper took care of Wonder and the Shade stepped up to Wild Mongrel. Mandel popped the Garden and pitched Rootwalla and Upheaval for the save. Things were not looking good for Williams. He brought back his Ichorid on upkeep and thought. Mandel only had one green mana now, so the Nest and Bearscape weren't as threatening as they could be. He sussed it out, and threw the Ichorid and Fiends into the breach. Mandel traded the Rootwalla to free his Nest. Williams busted out Butcher on the Werebear.

Mandel had nothing back. He waited on his Mongrel. Williams regrew the Ichord and smashed for another three. Things were tied at seven. Williams made a Millikin and passed it back. Mandel just played island and handed it over. Another Ichorid hit went by. When Mandel failed to show action, Williams swarmed in for the win. After freeing his Nest he had pulled three straight islands. 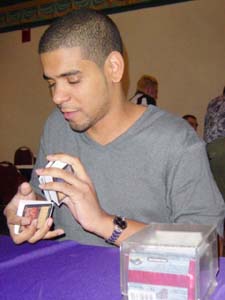 The deciding game began with just ten minutes on the clock. Shockingly, Mandel had no play on the first two turns of the game, under the gun of Williams's turn-two Shade. Mandel's decision to keep became clear on turn three when he busted out Squirrel Nest on his lone island. It could take the game by itself.

Williams wasted no time in showing Mandel the Rancid Earth in his hand. Mandel enjoyed a glower. His third forest came down and he had nothing to add. Mesmeric Fiend stole his Phantom Centaur and showed Grizzly Fate, Wonder and Acorn Harvest. Millikin joined the party. Mandel cast the Harvest and handed it over.

Now williams got rolling. He smashed for three more and doubled up on Millinkins and Shades. Mandel found his fifth land, but without threshold the Fate wasn't much of a threat. He played Wonder and waited. Squirrel and Wonder dove in front of the incoming Shades. The Millikins dumped Ichorid in the graveyard. Faceless Butcher took out the remaining squirrel.

Mandel was forced to Fate for two bears. Williams brought Ichorid back, Butchered a Bear and smashed with his team. The following turn finished things off.