Round 4: Dave Williams vs. Gabriel Nassif 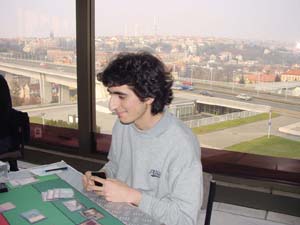 Dave Williams comes into this game with some disadvantages. Firstly his deck is awful. Secondly Nassif knows what's in it as Williams had asked him for some advice on tuning it during their wait for their bye rounds to finish. Unfortunately Williams doesn't have any idea what's in Nassif's deck.

Dave Williams is one of a few Americans to make the journey over. Unfortunately the Sealed deck gods haven't been kind as he's been forced to play a bad green, blue, red concoction. In contrast Nassif has what looks like a draft quality black-red deck with Rotlung Reanimator and a bunch of clerics. This is not going to be easy for Williams.

Williams went first. His first morph, a Weaver of Lies, dropped to a Shock and then Nassif started with a Cleric motif as a Vile Deacon followed a Rotlung Reanimator. Williams summoned a couple of morphs but Nassif's deck was starting to look more like a draft deck as Withered Wretch and Shepherd of Rot came onto the table to boost the Deacon to a 6/6 attacker.

Williams unmorphed a Branchsnap Lorian and ran it through the Shepherd, giving Nassif a Zombie. He still had plenty of other morphs and a Symbiotic Elf to at least try and keep pace with the advantage the Reanimator was giving Nassif.

A Symbiotic Beast appeared to try and shore up the ground for Williams. He was in trouble though, on three life as Nassif attacked with all his monsters. Williams chumped with some insect tokens and the Beast spawned some more.

A Goblin Goon appeared for the American but the blocking was still tricky as Nassif added a Fallen Cleric and swung with his team again. The Reanimator meant Williams couldn't trade evenly and he thought hard about how to block before deciding he couldn't win. 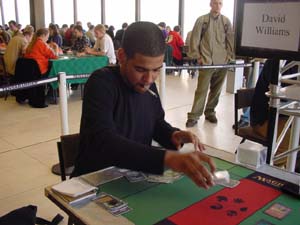 Things didn't improve much for Williams as he needed to mulligan game 2. It looked better when Nassif passed turn 3 without putting a creature on the table. The reasoning became clearer when Nassif took out William's morphed Weaver of Lies with a Chain of Plasma. Williams didn't bounce it back and the Vile Deacon appeared again for Nassif.

Williams brought out a Berserk Murlodont and looked unhappy as he dropped a sixth land on the table and passed the turn. Currently he had 5 forests and 1 island. Nassif unmorphed a Shaleskin Plower to increase William's misery. The American was forced to cycle a Tusker to find a replacement rather than cast a potential blocker.

From that point there was no going back. The Murlodont traded with the Plower and Williams didn't draw anything else to stop the Deacon.

In the end the match was exactly as one-sided as Williams predicted.