Round 4: Defending the Home Turf

Lebedowicz is one of the personalities of the Pro Tour; as known for his stories as his tournament accomplishments - both of which are stellar. Local boy Arnost Zidek meanwhile, is looking to repeat his performance from Pro Tour-London, where he hit the Top 8. He's probably even looking to do slightly better here in his home country. Each player went into pod two 2-1, so already there is the feeling that losing here means that some kind of a winning streak will be necessary to compete for Sunday action. 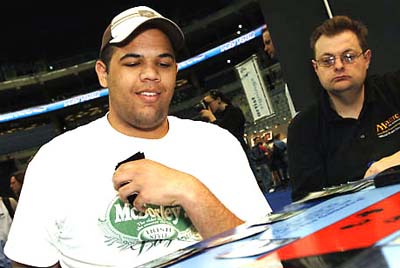 Osyp won the roll, and led off with a forest then a Boros Garrison, to Zidek's IslandForest. Each player had signets; Lebedowicz's Simic, and Zidek's Golgari. The first creature on the board was a Dryad Sophisticate from Osyp, but it was stymied for a turn by a Silkwing Scout.

"Do you have any non-basics?" enquired Lebedowicz with a sigh. He didn't wait for a response before just playing Sporeback Troll and passing.

Zidek cracked for two in the air with his Scout then played a Torch Drake.

For Osyp a Compulsive Research improved on his hand, and he swung with his men. Zidek took it, then promptly returned the favour with his flyers. The life totals were 16 to 14 in Zidek's favour, and he tried to press the advantage with first a Last Gasp on Lebedowicz's troll, then Punishment for 2 to wipe all of Osyp's non-land permanents from the board.

A disgruntled Lebedowicz shrugged, untapped and played a Drift of Phantasms and a Thrive for 1 to stem the flow from Zidek's flyers. Zidek seemed to respect it, and did not attack, simply electing to play a Bloodscale Prowler. Osyp went with a Torch Drake, and Zidek again played a Prowler and passed.

Very much on the defensive, Lebedowicz passed. Zidek untapped and used Seal of Fire on his opponent's Torch Drake before swinging with everyone. The Drift blocked one Prowler, while a Cackling Flames got rid of the other. After combat, Zidek played out a bloodthirsty 5/6 Ghor-Clan Savage.

Osyp's bloodthirst was for 0 with Petrified Wood-Kin, and when Zidek followed up with Tibor and Lumia, things looked tough for the Pro Tour's own Joe Black, sitting on 8 to Arnost's 16. A Cytoplast Root-Kin certainly helped, but Osyp was still having to work on his defence, while it appeared that he was drawing a lot of lands.

Arnost played an Ickspitter and said go. Osyp had even less plays than that.

As Arnost began to whittle down his opponent with Ickspitter damage, Osyp continued to play draw-go. Nothing short of a Savage Twister looked like enough to pull it back at this point.

Arnost had a Wee Dragonauts to allow his Ghor-Clan Savage to fly thanks Tibor and/or Lumia (who can keep them straight?), and a big attack was enough to get a very mana-flooded Lebedowicz to scoop them up for Game 2.

In the second game, it was Lebedowicz who took the initiative, with a turn-two signet followed up with a transmute of Drift of Phantasms for Compulsive Research. Zidek played a Silkwing Scout before allowing Osyp to use his card-drawing sorcery. Lebedowicz had a tricky decision as to discards, being slightly low on mana in the early game, eventually choosing to ditch Golgari Signet and Silhana Ledgewalker. He then played a Gruul Turf and passed. 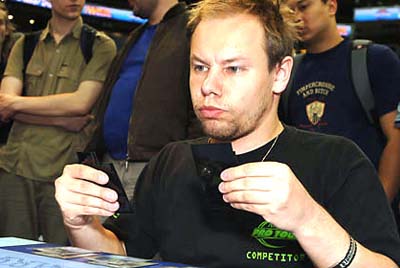 Arnost got his beat on, then played a Wee Dragonauts, again using the air plan. Lebedowicz didn't really have any board at this point, but that rapidly changed with a Cytoplast Root-Kin and a Mark of Eviction for the Dragonauts. The two flyers took Osyp to 15, then a bloodthirsty Ghor-Clan Savage came out to play for Zidek.

What left play was the Marked-up Dragonauts, which were evicted at the start of Osyp's upkeep. Lebedowicz chose not to mark up the Savage, which suggested some sort of trick on his part. Zidek went for it with both his guys, and sure enough, Joe Black had a Gaze of the Gorgon to kill the Savage, but Zidek had a Repeal in response to stop that plan.

On Osyp's turn it was back to Plan B, make the 4/4 again and put the mark on the Savage. On 13 life, there was only so long that this plan would work. In fact, when Zidek played Punishment for 1, it looked like the plan wouldn't work even in the short term. He attacked Osyp down to 6, and suddenly Lebedowicz was in dire trouble.

He attacked with his 4/4 and played out Petrified Wood Kin who was pretty large. Unfortunately for Lebedowicz, it seemed that Zidek had all the answers, as Clutch of the Undercity removed the last blocker and allowed for a big swing for the win.