Round 4 Draft: Drafting with Masashi Oiso 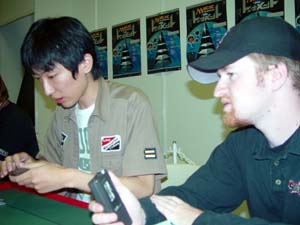 , Masashi Oiso is the best Magic player in Japan at the moment. With three Pro Tour Top 8 finishes in two seasons and a Rookie of the Year title, he's been incredibly consistent, and proven himself to be among the elite. This weekend, another big finish will give him the opportunity to not only add more to his individual accomplishments, but to represent Japanese Magic at the game's biggest event. Thus far he is well on his way to that accomplishment, starting out the day with a 3-0 record in the Standard rounds. At his draft pod, he had Kazumasa Shiki and Tsuyoshi Ikeda to his left.

The first pack contained Shatter, Vedalken Archmage and a Viridian Shaman, and Oiso went red with the Shatter. He stayed on track with a second pick Slith Firewalker, and a third pick Goblin Replica, passing Blinding Beam, AEther Spellbomb and Predator's Strike. The fourth pack contained only Predator's Strike and Moriok Scavenger as playable cards, and he took the black creature. Interestingly, he took another Scavenger fifth, passing Silver Myr. The rest of Mirrodin provided Nim Shrieker, Goblin War Wagon, and a very late Atog. In Darksteel, Oiso took Arcbound Slith first pick, over Chittering Rats. The second pick Barbed Lightning was a no-brainer, and he took a third pick Dross Golem over Arcbound Bruiser. Through the rest of Darksteel, he picked up a total of three Dross Golems, Chittering Rats, and a late Whispersilk Cloak to go with his Slith creatures.

In Fifth Dawn, Oiso opened Vulshok Sorcerer and Furnace Whelp, but took Cranial Plate. He got a second pick Energy Chamber, and then drafted Baton of Courage over Fleshgrafter. Cackling Imp came around fourth, and he passed up a second one in order to take Iron-Barb Hellion. Another Imp found its way into Oiso's deck anyway, along with Blasting Station, Flesh Grafter, and Lose Hope.

Oiso: I think it went very well, and my deck is strong. I'm happy with my picks, especially the two Scavengers.

TW: That I was kind of surprised by, because you took one over Predator's Strike, which is reasonable since you passed a Viridian Shaman. But fifth pick, I was very surprised to see you take a Scavenger over Silver Myr, since most players value mana Myrs very highly. Now that there's only one Mirrodin pack, I would think that acceleration is even more valuable.

Oiso: I think that you can build a deck without Myr. If you build a good deck, you don't necessarily need a Myr to speed it up. I don't place too high of a value on Myr right now.

TW: Most players seem to not value the Scavengers that highly, so I'm curious to know why they're so good in your deck, and why you like them in general. Since you took them early, I'd imagine you had a plan in mind.

Oiso: Basically, I'm thinking that it's going to allow me to recycle all my artifact creatures. I can recycle Goblin Replica, which is always strong. The Dross Golems die, but they take away the thing that blocked with them. So, they're good beatdown creatures, and the Moriok Scavengers let me get them back, and the Arcbound creatures. They die, they make something bigger, and I bring them back.

TW: If that's a part of the plan, why take Dross Golems over Arcbound Bruisers?

Oiso: I have lots of cards that can pump up the Dross Golems, and I didn't have any Myrs. Having lots of five mana creatures could slow me down, and since I'm going with black the Dross Golem doesn't really cost five, it's more like he costs three. I can bring them out, and they'll get bigger with Energy Chamber or Cranial Plating. When they die, I'll just bring them back.

Oiso: The Archmage locks you into blue, but you can reasonably splash Shatter, and I didn't want to play green.

TW: Do your regret that at all? It seemed that the red was getting cut off in the first pack.

Oiso: Well, I got the Atog really late, and the Goblin Replica and Slith Firewalker. I'm surprised to hear you say that red was being cut off.

TW: I mean in the sense that you weren't being passed the premium red commons, like Shatter or Electrostatic Bolt.

Oiso: There were no red commons in the pack at all. I just assumed that no red cards were coming out.

TW: So do you think it's a case where players were taking the red cards, or that the packs just didn't have them?

Oiso: I'm assuming that it was the packs.

TW: What was up with the first pick in Fifth Dawn? Do you think that Cranial Plate is that good?

Oiso: I had already picked up enough creatures to overwhelm my opponents, so I was more concerned with pumping up my creatures. That's why I passed the Whelp. I think that unless you're planning on playing five colors, the Bringers aren't worth taking, because at nine mana they're too hard to get out.

TW: Is that why you took Baton of Courage third, because you wanted more pump effects?

Oiso: Yeah. I wanted to pump my creatures up, and I had the Energy Chamber at that point, which meant I could put more counters on the Baton.

TW: But the Energy Chamber gives you the counters permanently anyway, right?

Oiso: Sure, but if you want them at instant speed that's an option, or you can charge it up while you have no creatures out.

TW: Do you think there's anything missing in this deck that you'd like to have?

Oiso: I passed a Blind Creeper assuming that another one or two would come. I only have a pair of two casting cost creatures, and it would have been nice to have more low-end creatures. With the Energy Chamber out, its drawback becomes less significant. There are lots of cards that can help the deck, but I'm regretting no Creepers. I think that I may have wanted a Horned Helm. Whenever one came to me, I thought about it but I passed it. It's a solid piece of equipment.