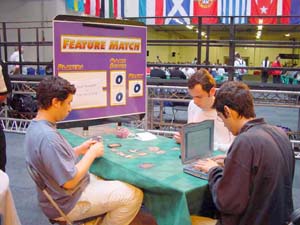 This is what we have for you this round: a former Pro Tour champion who came out of nowhere against the three-time Dutch National champion and former World champion. Not bad. Not bad at all.

They both started with the same play: Carrion Feeder. Farid followed it with Catapult Squad but had to cycle Dirge of Dread to find his third land. Tom followed suit, landcycling Noble Templar to find a second Plains to play out Edgewalker.

The Edgewalker and the Squad traded and Meraghni played a morph – Gravel Slinger -that died in the next combat phase as Tom sacrificed Deathmark Prelate to pump his Feeder.

The ever-growing Feeders kept churning away, as the French played another morph and the Dutch played another Prelate. Behind on the damage race Farid sent the whole team in, unmorphing Daru Lancer to kill the blocking Prelate. 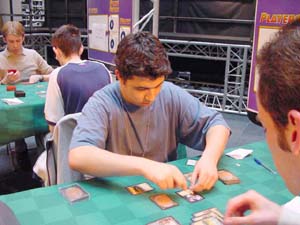 Misery Charm rescued the Prelate from the graveyard but Tom still took his time on the following. Finally he played Whipgrass Entangler. Farid paid the "Propaganda" effect, added a morph to the mix and started tolling the bells for Tom's Feeder with a Lingering Death.

Farid's army stormed into the Red Zone and when the dust cleared, Tom Van de Logt was at four, facing two creatures without any non-land permanents. His next draw failed to yield any miracle.

Tom opened with a turn two Withered Wretch and a morph (Skinthinner) )before Farid could muster anything. The French played the usual turn three morph and declined to block the two incoming creatures. Satisfied, Tom took to the skies with a Screeching Buzzard.

But Meraghni had a big trick up his sleeve. He revealed his morph... Bane of the Living. 3-for-0... not bad at all. Van de Logt was visibly shaken with the result. Farid played Aven Farseer, a morph and Daunting Defender while Tom rebuilt with Akroma's Devoted and Noble Templar.

With the score close (Tom thirteen, Farid twelve), the Dutch took his time, trying to work out a new battle plan. He attacked with the Templar, played one of his Prelates and sent the turn over to the French. The Farseer kept pecking away and the French played another morph. 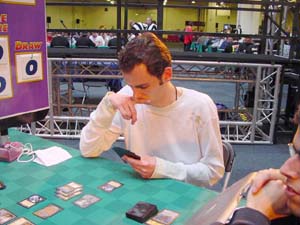 Meraghni unmorphed Gravel Slinger, and sent his pumped-up Farseer into the Red Zone. Tom played Decree of Justice to get himself a big Angel but the French didn't even blink. The Dutch reviewed his options over and over, and sent the Angel in.

Again the French was more than ready: his last morph was Aphetto Exterminator. Things were looking grim for Tom Van de Logt. Farid's creatures outnumbered his two to one, he was locked out of the ground by Bane of the Living and a 3/3 Farseer had him on a three-turn clock.

A Whipgrass Entangler gave him some hope. He used it to shut the Farseer out of the Red Zone but Farid Meraghni was a man in a hurry. He simply sent Bane, Deftblade Elite (provoking Noble Templar, Exterminator and Putrid Raptor in. The Dutch agonized over his blocking assignments as when the dust settled he only had the Templar on his side of the table.

He drew another card but it was clear he knew there was no way out of it.

Farid: "Sorry, I think my deck is simply better."
Tom: "Yes, and you had faster draws. I think you were a bit lucky in the draft.