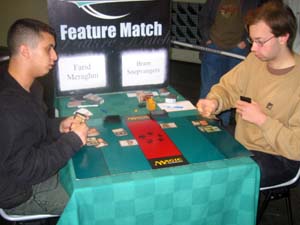 the "three byes" players come out to play. Farid, Magic's example that practice can make perfect after capping a 1000+ DCI event year with a Limited Pro Tour win a while ago, squares off against Bram, the quiet giant who showed the world Kai CAN be stopped on Sunday. More than once, in fact.

With such a long event, nine rounds, the three byes aren't as decisive as usual. They both know they want at least a 7-1-1 by the end of the day so a win here gets them to the midway point in perfect shape.

Farid came out smoking with Iron Myr, Talisman of Progress and Pyrite Spellbomb before Bram had a chance to make a move. A Krark-Clan Grunt slowed the French down. An unsatisfied Snepvangers then played Granite Shard and shot the Myr. The French sacked it to play Shrapnel Blast to ice the Grunt.

His next creature was Wizard Replica who quickly got some equipment: Vulshok Battlegear. It started flying over Tel-Jilad Chosen. The Dutch decided he better keep up the pace so he played Goblin Replica. The Wizard Replica dealt damage one more time and passed the Battlegear to a Cathodion.

On the next swing the Replica took one for the team grabbing the Battlegear. Snepvangers carefully planned his next move, then played Troll Ascetic and Copper Myr. Meraghni shrugged and played another land, apparently not happy with the way the game was going. He had only one card in hand.

Still, Bram carefully redid his math before sending his Green duo (Troll and Chosen) into the Red Zone - dropping the French to nine. Farid let them through. Snepvangers played Myr Enforcer and passed the turn. With eight lands in play and one in hand, Farid reached for his deck and drew another land.

With only the Replica staring down five creatures he decided it was high time to scoop.

Snepvangers first turn Bonesplitter only found an owner three turns later. By then Farid had Goblin War Machine, Vulshok Battlegear and Leonin Anubas to protect them both. Still, the Dutch kept his cool. A Shrapnel Blast took the foily Abunas out, but Meraghni bounced right back with Ogre Leadfoot.

The Ogre eagerly grabber the Battlegear and started swinging. With a thematic army - ie, two Myrs - there was little Bram could do besides hang on and hope for better creatures. He got some help in the shape of Tel-Jilad Archers but it was too late. After he assigned blockers on the following turn Farid showed him the elbow: Shrapnel Blast for the win.

After the two very one-sided games, there was still thirty-two minutes left on the clock.

Again Farid came out smoking: Pyrite Spellbomb, Myr, Spikeshot Goblin, Hematite Golem, Fangren Hunter. The Goblin ate up a Chosen and a well timed Shatter turned a double-block into a bloodbath. The French looked like he trying to outrun the now defunct Concorde.

Snepvangers tried to slow things down with Duplicant but Meraghni would have none of that. Shrapnel Blast took care of that and a top-decked second Shatter stopped Myr Enforcer from blocking anyone. Just like that, Bram was at three with no nonland permanents. He played a couple of creatures but Farid knew what he had to do... he sent two creatures in and used Pyrite Spellbomb to make sure both blockers died.