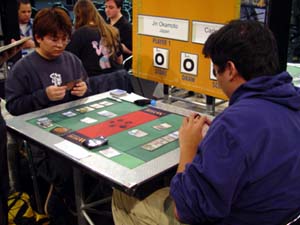 World Champion Carlos Romao has one of the Pro Tour's biggest smiles. Despite his usually jolly appearance, he plays the game with a quiet intensity. That's just fine with Jin Okamoto, one of Japan's most lettered players. He plays a very careful game. These two clashed at 2-1, and Romao was not optimistic about the matchup.

Romao couldn't contain a smile as he kept his opening hand. It turned out it was a smile of resignation. While his first play was a Skeleton Shard on turn three, Okamoto was firing with Aether Spellbomb, Copper Myr and Tel-Jilad Exile. Irradiate took care of the Myr, complicating Okamoto's mana, but he had Chromatic Sphere at the ready. It let him bounce Romao's next play of Pewter Golem and send for more damage. Next came Mask of Memory, and Romao was in serious trouble.

He had to chump with his replayed Pewter Golem, then Shard it back and put it into play again. Of course by that tim Okamoto had Neurok Spy to inherit the Mask, and he started doing some very unfair things. Skyhunter Patrol and another Spy soon showed up, while Romao's ground pounding team of Pewter Golem, Frogmite and Malachite Golem had to stay home.

It was a silent slaughter. 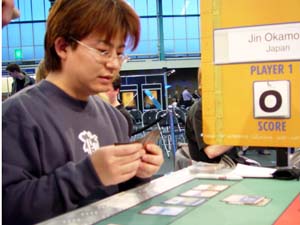 This time around, Romao had a second-turn Myr while Okamoto had nothing to do. However, all Romao could accelerate into was Thoughtcast. Okamoto's third turn came and went with three untapped mana. Romao played a Soldier Replica and held back for fear of Raise the Alarm sabotaging his Myr.

Finally Okamoto got in the game with Tel-Jilad Exile. Romao upped the stakes with a Malachite Golem, but Okamoto showed him who was boss with a mighty Molder Slug. Romao didn't even flinch. He untapped, Irradiated the Exile and Terrored the Slug, losing his lowly Myr. Then he bashed for six.

Okamoto hoped to buy time with an Aether Spellbomb on the big Golem, and Journey of Discovery got him his second plains and an island. However, Romao ripped his sixth land and replayed his 5/3. All Okamoto could do was pay full price for a Somber Hoverguard, quickly Irradiated by Romao. He played a Skyhunter Patrol, but Romao's men kept hitting. At least it would hold off Romao's Pewter Golem. The problem was the rest of the monsters on the table. Okamoto chumped with Den-Guard, then scooped.

Okamoto used a Talisman of Unity to fire out an early Skyhunter Patrol, making Romao's turn-three Thoughtcast off Leaden Myr somewhat underwhelming. Okamoto hit, then dropped Den Guard and fetched blue mana with Journey of Discovery. Romao bought a Frogmite for three and passed it back. 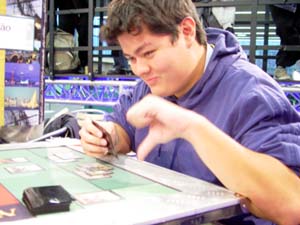 Okamoto was short on action. He popped a Chromatic Sphere but drew nothing, and burned for one before swinging for two in the air. Romao started with his heavy hitters. Malachite Golem fell to Creeping Mold, but Pewter Golem got to stay. Okamoto cycled a Spellbomb, but just turned up more land. Irradiate cleared away the Patrol and let Pewter Golem start bashing.

Finally, Okamoto turned up a non-land: Luminous Angel. Romao tapped eight and showed him Riever Demon, while Okamoto made a sound like deflating. His next draw was a Mask of Memory, and that was it.

Afterwards, Okamoto asked Romao to pose for a photo.