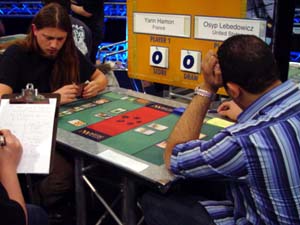 of these players requires much in the way of introduction. Osyp is equally renowned for his prowess as a player and his online antics. Whether it is his humorous Magic advise column on the TOGIT site or prank posting the editor of Star City with a pseudonymous post criticizing himself those antics combined with his gregarious personality have made him one the most popular players on the Tour. Oh yeah—he won a Pro Tour last year to boot!

Yann caught the attention of the Magic community when he won a pair of Grand Prix in a relatively short period of time. It was his Top 8 finish in New Orleans that really put his on the map though. He was paired with his playtest partner Nicholas LaBarre and rather than play the match his friend forfeited the match and went home the night before the Top 8. The incident set off a firestorm on the various Magic forums and Yann Hamon received more coverage than the winner of the tournament Rickard Osterberg.

Osyp had just finished a rough table with uncooperative drafters and was not excited about being in the feature match area. "You don't want to cover this match."

Osyp stuck with a four-land hand while Yann pitched his back when there were none in his opening seven. He kept the next six and played a first turn Pyrite Spellbomb.

Osyp had a Gold Myr and used it to accelerate into Skyhunter Patrol on the next turn. The Patrol chose not to block Yann's Tel-Jilad Chosen that he had played on turn two. Osyp put the Frenchman on Predator's Strike and Yann was holding one for a sticky situation. Yann followed his attack with a Viridian Joiner and Osyp used an Electrostatic Bolt to clear the way for three points of damage.

The Chosen got in for two more points of damage and was joined on Yann's side by a Clockwork Condor. Osyp was flooded on land and considered what would happen if he attacked into the Condor. He finally sent the flier in and Yann chose not to block.

Yann got in for another two points with his Chosen—the Condor that didn't block did not attack either—and when he passed the turn Osyp cast Blinding Beam to tap them both down for a turn.

Osyp had still more lands and attacked for three. He cycled a Spellbomb for threats and he played an Auriok Bladewarden. Yann smoked it with his own Spellbomb. Yann had a pretty impressive collection of lands in play and added to it with an entwined Journey of Discovery.

Osyp got in another attack for three but could not find anything to play save lands. Yann sent his Chosen back on the offensive, took Osyp to twelve and shut down the Patrol with a Tel-Jilad Archers. When he made ten of the twelve possible eyes with One Dozen Eyes on the next turn the frustrqted American scooped.

Yann inquired about the contents of Osyp's hand a the end of the game, "Lands?"

"Nope. All good spells I didn't feel like playing." 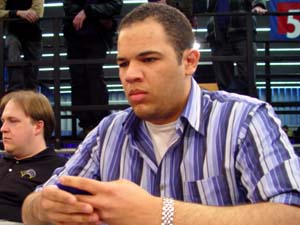 Both players had turn two Myr and they traded in combat on turn three. Osyp had a Spikeshot Goblin and Yann played the sturdy Cathodion. Both players were swimming in land this game and Osyp's next play was a Goblin Dirigible that was proptly Deconstructed—Yann burned for three. Osyp fell to thirteen on the attack.

Osyp attacked with his Spikeshot and tapped out to play a pair of Replicas—one Goblin and one Wizard. Yann swung in with his Cathodion and Osyp fell to ten. Wurmskin forger came into play as a 3/3 and the Joiner became a 3/ 4.

Osyp used Blinding Beam to lock down the team and swung in for five. They were both at ten. Yann frowned at his tapped team and put an Elf Replica down to man the gates until the trip 3/3s could come back online. Osyp played an Icy Manipulator and the land needed to use it and the Goblin next turn—he was out of cards.

Osyp fell to four after tapping the Joiner and blocking the Elf replica with his Wizard. Yann played an ominous Goblin Replica and sent it back to the American who used his Goblin to finish off the Elf Replica EOT. He untapped and used a Tooth of Chiss-Goria to kill the Goblin Replica before Yann could find red mana to dispatch the critical Icy.

Yann attacked with his Cathodian and it died to a Goblin Replica; Yann fell to seven from the mana burn. Both players were looking for threats and Yann thinned his deck with an entwined Journey. A turn later he played a Chosen to eat up a turn of Spikeshot Goblin. Another turn later he played a Viridian Shaman and chose to smoke the Tooth over the Icy. Osyp pumped his Spikeshot and when the Forger attacked he was able to trade his Wizard repilica in combat.

Osyp played a Taj-Nar Swordsmith and searched out a Leonin Scimitar. Yann scooped on the next turn.

Yann chose to draw and Osyp shipped back a hand with one land. Yann shipped back without any—his second zero land hand of the match. Each player stuck by their next six. Each player opened with Spellbombs—Pyrite for Osyp and Aether for Yann. Osyp drew a Mountain to allow for a turn-three Spikeshot, which showed up on time after a Tel-Jilad Chosen from Yann.

Osyp killed the Chosen on his next turn and recruited a Yotian Soldier. Yann played a Clockwork Condor and Osyp came back with a Bladewarden to make his Goblin more menacing. Yann's Tel-Jilad Archers joined the party and both players hunkered down to not take their first loss of the tournament.

Osyp had to pass the turn and took two from the Archers on his opponent's attack step. Yann entwined a Journey and took two from the Goblin EOT. Osyp also cycled a Spellbomb and was rewarded with an Icy Manipulator. He declined to use it on the Condor or the Archers and Yann sent them both into battle. His second main phase saw all Dozen Eyes hit play. Osyp's Spikeshot killed the Condor EOT with some help from the Bladewarden.

Yann sent all ten eyes and his Archers into combat when Osyp tapped the largest pair of eyes. Osyp fell to seven but took out eight eyes with blocking and shooting and pumping and stuff. Yann entwined another Journey but did not look happy. 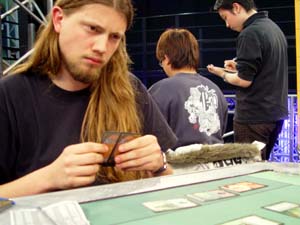 Osyp played a second Spikeshot—looking quite pleased—and attacked his foe to fourteen. Yann played a Longbow and attempted to get it on his remaining 1/1 but it was shot in response. He then attempted to get it on the 5/5 and it was tapped. Yann sent in the Archers and Osyp was again wary of Predator's Strike. He blocked with his inactive Spikeshot and it got rolled over when Yann indeed had the Strike.

Yann gamely tried to find something else to compliment his 5/5 pinger. He managed to get Osyp as low as three but a Taj-Nar Swordsmith found a Scimitar that finished the game being passed back and forth by the Bladewarden and the Spikeshot.