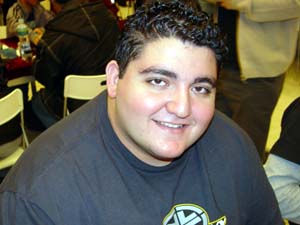 it always the way?

You travel all the way to a big event like a Grand Prix and you get paired in the first round with someone you traveled there with. It may have been round four for everyone else but when you have the resume that these two guys are sporting it is rare for your round one to be any earlier that the fourth round at a Grand Prix.

The two Americans have spent the week together hanging out and practicing after Pro Tour Kobe and they were no happier to be playing each other in their first round of action than you would be to paired with a traveling buddy at a PTQ. "We sleep in the same bed," protested Gabe Walls. When that raised a few eyebrows he added, "King size!"

Gabe had a powerhouse deck with Spikeshot Goblin, Granite Shard, Arc-Slogger, Crystal Shard, and Chromescale Drake to name just a few cards. Antonino, on the other hand, had a middle of the road green-red deck that he was less than pleased with. He had the option of siding into a mana-clumsy black-green touch red deck for Death Cloud and Riever Demon.

Neither player had any action until Gabe made a turn three Granite Shard. He laughed at DeRosa who started groaning about the comparative quality of their decks. When DeRosa pondered his third turn Gabe began to needle him, "What are you thinking about? How to kill me?"

"I have nothing. I'm going to play a card that Gabe doesn't even like." That was the cue for a Cathodion from DeRosa.

Gabe had a turn four Myr Enforcer and giggled as DeRosa groaned. DeRosa played a Clockwork Condor and Gabe nearly fell over from laughter, "C'mon Condor…C'mon!"

"The Condor is getting in there don't worry."

Gabe had a Spikeshot Goblin with an Arc-Slogger waiting in the wings. "You can't win but you are still trying."

"Do you want me to concede?"

There was no fifth land from Antonino and he played a Viridian Joiner. Gabe nearly wet himself laughing as he flipped an Arc-Slogger onto the board. "If you win this game I will be very impressed."

DeRosa was getting irritated, "I should win this so I can impress you."

DeRosa attacked with his Cathodion and the Condor and Gabe crinkled his brow. "Are you trying to bluff me? If I block and you have nothing you're going to look like a buffoon. You're too dumb to bluff." Gabe had no blocks and De Rosa followed his attack with a Tangle Golem.

Gabe fell to nine. He shot the Joiner on his main phase with Arc-Slogger. He played an Arcbound Hybrid and attacked with everyone. De Rosa put the Tangle Golem in the way of the Slogger. Gabe took the trade and the beast shot DeRosa on the way out--dropping him to one.

DeRosa looked at his hand and said, "I can top deck to kill you if I draw a pump spell."

Gabe was skeptical, "I'm at nine."

DeRosa showed him a Barbed Lightning and cycled a Chromatic Sphere to find the Predator's Strike but he only found Mirrodin's Core. "I can't believe you played that game so badly and I still lost."

"What should I have done?"

"You shouldn't have given me a chance to win."

Gabe had Lighting Greaves on the second turn and announced De Rosa's third turn Joiner before it hit play, "You love that guy!"

"I had two of him in my Kansas City deck." De Rosa played a Fangren Hunter on the next turn and shrugged, "Did you think my deck was all bad cards?"

Antonino attacked with everyone and Gabe frowned at what he anticipated would be DeRosa's next play, "You have Stand Together? You are so bad."

Gabe put the Crusher in the way of the opposing Crusher and Antonino did have the spell. "Why am I so bad?"

"Because you clumped together five mana and then attacked."

"Maybe I was bluffing?"

"You are too dumb to bluff."

"Judge, make him stop insulting me.

Gabe played a Fractured Loyalty on the Fangren Hunter and passed the turn after equipping the Slogger and leaving it back on guard duty. When DeRosa announced an attack the Slogger shot it for two points of damage and Gabe took control of the beast. DeRosa slowed down to weigh his options and Gabe tried to get him to play faster. "I'm sorry Gabe. My deck is not good and I have to struggle to win. I am not lucky enough to open Arc-Slogger…"

Gabe smirked, "And Crystal Shard and Flamebreak and Spikeshot Goblin…"

De Rosa had no attacks and played Hematite Golem. On his turn, Walls moved his Lightning Greaves and DeRosa responded by casting Barbed Lightning with entwine. Gabe took the Lightning Greaves back for his Slogger and passed the turn, "I'm at four…"

When DeRosa declared his attack, Gabe shot the Fangren Hunter and had only six cards left in his deck when it resolved, "I guess I am done sloggering."

DeRosa had no attack and the judge asked him to play at a quicker pace. Gabe went to move the Greaves again but DeRosa had the Echoing Courage to steal it back. "It is my Fangren Hunter." Gabe played a Citadel and a Granite Shard.

De Rosa played a Condor and announced his attack. Gabe shot the Fangren Hunter with the Shard and took it over to his side. De Rosa sent in his 7/7 Crusher and his Hematite Golem. Walls double blocked the Crusher and Shattered the Golem. DeRosa killed the Slogger and made his Condor into a 10/10. Gabe got in for four with the Hunter and played a Goblin Replica with the mana to use it. It blocked the 3/ 4 elf and smoked the Condor on the next attack from DeRosa. 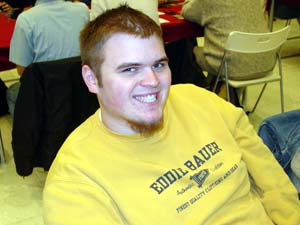 Walls played an Arcbound Hybrid and attacked for six. DeRosa was glum, "I think you are going to win." He could not attack with his elf because the counter attack would be lethal. It didn't matter, with only two cards left in his deck Gabe played a Chromescale Drake. He equipped it with the Greaves and attacked for the win.

"Great, another not-Day Two for me…" announced a disheartened DeRosa.