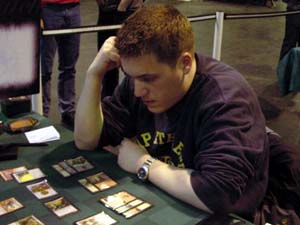 4 and in come the big guns. Tuomo Nieminen is a Finnish pro and part of the national team that made the final of the team event at World's last year. He also made the Semi's of the individual event. Budde is possibly the biggest gun of them all, but this year faces a strong challenge to the throne from players like Gabriel Nassif despite winning the largest ever Grand Prix in Madrid last month.

Niemenen laughed and showed him the Swamp in his hand.

Budde was setting up some equipment: a Bonesplitter and a Morningstar. Then he made a Soldier Replica to give the goodies to.

Things then went tits up for the German as Nieminen used a Krark-Clan Stoker to bust out a Furnace Dragon that both wrecked Budde's board and left him with a 5/5 flier to deal with.

Unsurprisingly the game was over soon after.

This game the Finn didn't really seem to get going. Popping a Spellbomb for a card and making a Leonin Bolas was about it.

Budde also had a Bolas, but he had a Raise the Alarm token to give it to while he beat away with Soldier Replica and Wizard Replica. A Morningstar powered up the Wizard Replica.

Nieminen finally found his first creature, a Clockwork Vorrac, and while Bolas twirled away on both sides Nieminen didn't have enough to stop Budde levelling the match.

Nieminen muiganed to six in Game 3 and then failed to drop a land on turn 3 or turn 4. Budde wasn't really capitalising. An Arcbound Crusher showed up on turn 4 only to fall to Echoing Decay.

Nieminen found a third land but only pass the turn again. Budde dropped a Panoptic Mirror which Nieminen had to read carefully.

Nieminen found a fourth land for a Tel-Jihad Outrider. Budde put the Mirror's upkeep on the stack and imprinted an Electrostatic Bolt. Nieminen called over a judge to confirm but the result was a bolt to the Outrider.

Nieminen had an Ogre Leadfoot that was bolt-proof but the situation was not good for the Finn as Budde fetched the Crusher back with a Scavenger and started growing it with a Cathodian.

The Finn fought back, attacking with the Ogre and backing it up with a Fangren Hunter.

Budde turned the screw dropping an artifact land, Bolas and a Myr Enforcer to grow the Crusher into a frightening 5/5. Nieminen's options seemed limited. The autobolt capabilities of the Mirror combined with the Bolas made attacking hard and blocking nigh on impossible. An Essense Drain on the Cathodian switched the life totals 14 to 11 in favour of the Finn, but the board position was not good. An Electrostatic bolt on the Enforcer improved it somewhat. 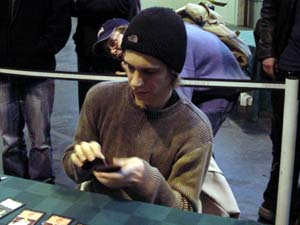 Unfortunately Budde ripped Betrayal of Flesh. One dead Fangren Hunter and a very much alive Myr Enforcer tipped the scales back to very much in favour of the German. Nieminen popped a Spellbomb in search of an answer.

A Deconstruct served only to move the Crusher's counters onto the Enforcer and he made a Clockwork Condor.

It was a futile gesture as the Mirror bolted it out of the road and the massive Enforcer smashed in for lethal damage.