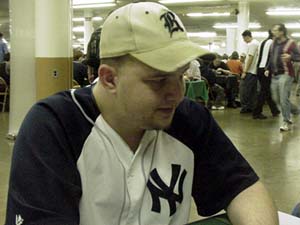 Matt Vienneau won Grand Prix: Toronto many years ago. More recently he made the finals of Grand Prix Boston during Odyssey block. Once a vocal advocate for the players of the game, Matt has been quiet of late and mostly plays online. An opportunity he pointed out he rarely has these days since Darksteel came online.

While he has shown himself to be no slouch with the sixty card variety Neil Reeves is one of the most feared competitors in the game with a forty-card deck. Like Matt he is a witty and charming player who always adds value to a feature match. With so many players preparing to play--almost the full 850 were going at it this round--it was hard to hear the two players banter.

Mike Turian hurried over to get in a line about this match-up. He pointed at Matt and claimed it was a face-off between an old player and an older hat. Meanwhile Matt seemed annoyed that all his best material was being drowned by the din of players searching for their seats, "Are you catching any of this witty banter? I'm doing it for your benefit."

Neil tossed back a hand with six lands and a Talisman. Matt chose to draw when he won the somewhat convoluted roll which involved multiple dice that featured both positive and negative numbers. Matt won after rolling a zero. "I know how to shuffle well, I always let my opponent play first," he grinned.

Matt kept his hand and led off with Bonesplitter. Neil played a Nuisance Engine and Matt offered a greater annoyance with a Chittering Rats. Neil sighed and Echoing Ruined the Splitter. "How annoying is this?" asked Matt when he played his second Rat.

Neil had nothing but land and tokens until the fifth turn when he played a Vulshok Battlemaster following Matt's Leonin Abunas. Matt sent in his three men and Neil put the Battlemaster in the way of one Rat. He considered drawing a card with his Pyrite Spellbomb but chose to kill the other Rat. Matt played Needlebug EOT.

Clockwork Condor came down for Matt and he played Serum Tank the next turn. A disheartened Neil made a token in response but then conceded the game, "Well that was exciting."

Matt waggled his eyebrows and smirked, "The key is to stack up both Rats along with a couple of Swamps and then have you opponent mulligan."

Neil agreed, "That will get you every time."

Matt made some alterations to his deck. After three rounds if testing he had revaluated his build and had cards ready to go for the second game each round, "I misbuilt my deck…"

Neil took out his Battlemaster and put in an Arcane Spyglass. He was distracted when he noticed that his name was spelled with an A on the feature match board, "Hey they misspelled my name! It is N-E-I-L!"

Matt teased him, "Oh you're that guy…I didn't recognize you."

Neil chose to play and kept his openers. He led off with Pyrite Spellbomb. Matt had a Steel Wall which he had shockingly sided in in place of Bonesplitter. Neil cycled his spell bomb and played a Psychic Membrane. "Here I am holding two Deconstructs and there is nothing I can do about it." Matt played a Skeleton Shard on turn three.

"The hits just keep on coming…" Neil cast Psychic Overload to keep one of Matt's three lands tapped down. Matt just laughed and played a fourth Forest and cast a Tangle Golem for three mana, "This would be a good time for you to have Domineer."

Neil only had an Arcbound Bruiser. Matt swung in with the Golem and Neil drew a card off of his chumping wall. "I just gained five life." Matt played an Arcbound Reclaimer and Neil looked from the Reclaimer to the Skeleton Shard and shook his head, "That is like infinite guys. It is turn five and I have no outs because I decided to Overload your land."

Neil soldiered on though and played an Atog and an Arcbound Stinger. "You said you had nothing. Where is all this coming from?"

Matt was out of plays for the time being and did not want to send his Golem into the Atog. He had three Forests and a Plains available but black cards and a Darksteel Gargoyle waiting impatiently in the wings. Neil beat in for one with his Stinger and played the Arcane Spyglass, "I told you the hits don't stop."

Matt drew his Leonin Abunas and when he played it Neil Bolted the Tangle Golem in response. Matt seemed concerned , "I don't feel like I am winning."

Neil was not buying it, "You are not exactly losing though are you?"

Neil drew a card with his Spyglass. He got in for another point of damage with his flier and passed the turn with nothing more exciting than a Talisman. He slumped as Matt drew a Swamp and was able to regrow his Tangle Golem with ample mana to replay it.

Neil's Oxidda Golem was underwhelming and he could only chip Matt down to seventeen with his flier. He continued to dig with his Spyglass and replace his lands each turn. His attacking Stinger was felled by an Irradiate and Matt looked to be in control even though he had yet to deal a point of damage. Finally he sent in his Tangle Golem and followed with a Chittering Rat and a Gold Myr.

Neil found a way to stem the bleeding with a Darksteel Gargoyle. A disgusted, "Sure!" was his response when Neil played his own indestructible flier on the next turn. He drew a pair of cards with his Spyglass and put down a Neurok Spy and Silver Myr.

Matt shook his head, "It seems ridiculous but…" He Deconstructed the Spyglass. Neil had to decide if he wanted to sacrifice it to the Atog or not. He allowed the spell to resolve and was shocked when Matt played a Specter's Shroud and a Myr. "I was sure you had nothing!"

Matt sent his Reclaimer to his temporary doom and made his Golem even bigger. Neil got in for two and played a Nuisance Engine. Matt regrew his Reclaimer and played it. Neil made a token EOT.

Matt sent in his Reclaimer and made his Gargoyle a 5/5 when Neil blocked. He also played a freshly drawn Fangren Hunter. Neil kept chipping away with his Neurok Spy and played a post attack Berserker. Matt had another Tangle Golem but couldn't find an attack he liked. Finally he sent in two Golems, Reclaimer and an equipped Gargoyle. Neil took no damage and a freshly cast Condor grew to a 5/5. Matt fell to five on the next attack from the Spy. When he played a Serum Tank it was Annuled. Neil double checked life totals. "You're at five and you have only the 2/2 guy in hand?" He showed Matt the Barbed Lightning in hand and they went on to the rubber game.

Matt was not encouraged by the results from last game, "I drew all the best cards in my deck and I couldn't beat you."

Neil nodded and promised an even tougher Game 3 id his deck delivered the goods. "I didn't draw the best cards in my deck…"

There were seventeen minutes left in the round. While they shuffled Matt groaned about not destroying the Spyglass sooner and Neil laughed, "That was my sideboard 'tech'."

Matt decided to let Neil play first and once again Neil had to send his hand back for six new cards, "God you are so good!"

The game started off with the same openers as the previous game. Neil had a Darksteel Pendant for the second turn this game though. He had no play on the third turn save land nor did Matt. Neil peeked with his Pendant and Matt enquired about the quality of the card. Neil was playing it but he was not a fan, "It is definitely not good unless your deck is not fast. My deck is definitely not fast.

Neil played a Nuisance Engine. When he tapped out EOT to Pendant, Matt flashed out Needlebug. Neil shrugged and played a Neurok Spy. Matt had Skeleton Shard.

The two players traded beats with their 2/2s and Neil used Echoing Ruin on the Shard. Reeves made a Stinger and Matt came back over the top with a Fangren Hunter. Neil had an Atog though and with his pest generator could keep the beast at bay.

Matt had to Deconstruct the Engine and this time Neil chose to sacrifice his artifact to keep Matt from the three mana. Matt had no attack and passed the turn. Neil dropped him to ten on his next attack and booed when Matt Irradiated the Spy on his next turn. "I should have done it long ago."

Time was called and the players had five turns to end this match or it would end in a draw.

Neil kept digging with Pendant and chipping away with his Stinger. He kept up the booing as well with the arrival of a Swamp and seemed indifferent to Leonin Abunas. He played an Arcbound Bruiser and promptly sacrificed it to Atog to make a 4/4 flier. He dropped Matt to five.

"You only have one card? Is it Annul?" Matt attempted a Darksteel Gargoyle and it resolved--much to his surprise. Neil tapped three mana and it looked like a Regress was coming but it was only a Psychic Membrane. He played his last land and left his hand empty in case of Chittering Rat.

Neil activated his Pendant on upkeep and pushed what he saw to the bottom. "I still have not seen any of my three best cards." He kept a Barbed Lighting but it looked to not be enough. The Abunas kept him from taking the Needlebug out of the equation and he could not get any damage through. 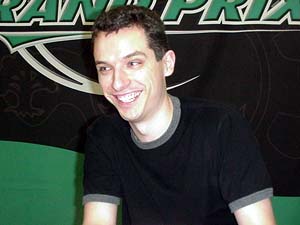 Matt played a Chittering Rats and Neil responded to the effect by entwining the red damage spell to kill it and do three to Matt but it was just short of enough and the game ended in a draw.

Matt Linde was among the spectators that had gathered to watch the match and asked, "What was your out, Neil?"

Neil fanned through his deck and put a Warhammer and Wand of the Elements on the table. "These two are pretty good…" He plopped a Grab the Reins on top of them, "But this was my out."