4 and now everybody gets to play. One of the interesting and welcome tidbits from this Grand Prix is that there are a number of Russian players present today. Denis Tagunov's profile for the Moscow 9th Edition was singled out for some mirth by the rest of the world team, but he went on to vindicate his appearance by making the quarter-finals of that event. At Hasselt he's been thrown straight into the fire though as his fourth round opponent is possibly one of the best limited players in the world: Anton Jonsson from Sweden. 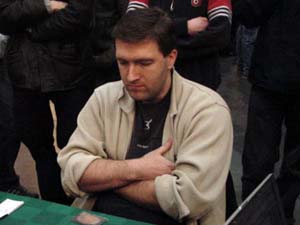 These players have crossed paths twice before. Jonsson was victorious in Grand Prix Helsinki while Tagunov got his revenge at the Moscow invitational.

Jonsson won the die roll and made a choice that is proving popular for this format. He elected to draw rather than play for this. Tagunov was probably very happy for this as he'd managed to find a hand with a near perfect mana curve. He dropped Sell-Sword Brute, then Thundersong Trumpeter, then Screeching Griffin before topping out with a turn five Siege Wurm.

Jonsson was always on the defensive and never quite able to turn around the assault. A Benevolent Ancestor slowed things down, but the game looked over when Tagunov was able to boost his Siege Wurm with a Seeds of Strength after Jonsson tried to gang block.

Jonsson was able to take out the Siege Wurm with Brainspoil, but it was too little, too late as the following attack put the Swede within range of the Lightning Helix in Tagunov's hand.

Despite the Russian's strong start in the last game Jonsson still kept to the plan and made his opponent go first. Tagunov had to mulligan and managed little offence until Wojek Embermage appeared on turn four. In the mean time Jonsson had ramped up his mana with a Signet and Farseek before plopping a Siege Wurm onto the table the hard way. He followed with Sisters of Stone Death.

When Tagunov passed another turn without adding anything to the Embermage on board I was about to write "Game 3", but then the Russian found some fight.

Galvanic Arc and Lightning Helix teamed up to fry the Sisters and then, when the Siege Wurm attacked, it found itself on the wrong end of an Embermage pumped up by Seeds of Strength. Jonsson merely tapped 8 mana and summoned a Goliath Spider. Tagunov tried to fight back with a Siege Wurm of his own, but a Brainspoil on the Wurm finally banged in the last nail.

Game 3 and now Jonsson would have to lead off. It was still Tagunov who ended up mulliganning though. The six-carder seemed pretty good though, as he summoned first an Evangel and then a Transluminant. Jonsson ramped up with Farseek, but then missed his normal land drop. He managed a Transluminant of his own and both of the Dryad shamans headed off to the spirit world together after a collision in the red zone. 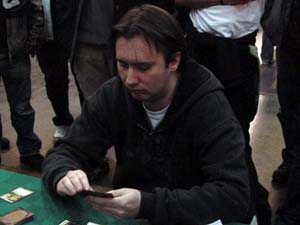 Land number four put in an appearance and Jonsson was able to bring a Loxodon Hierarch into play. His mana woes continued though as his deck failed to cough up another land. Tagunov pushed his advantage in board position by adding Ordruun Commando, Screeching Griffin. A Sunhome, Fortress of the Legion compounded Jonsson's troubles and made blocking impossible.

Jonsson's hand was jammed up with Siege Wurms and black cards he couldn't cast and he wasn't long in extending the hand.

It's interesting to note and a lesson for lesser players out there that Jonsson is sure that his deck is bad. To the untrained eye this might seem odd as Jonsson has Sisters of Stone Death, Loxodon Hierarch and not one, but two copies of Putrefy. I suspect most of you out there would be happy to receive this, but,as Jonsson points out, there is no way to gain card advantage. And in sealed deck card advantage is key.