weden's Joel Larsson has been making a name for himself ever since he burst onto the scene. Though he's still 21, he has four Grand Prix Top 8s and a Pro Tour Top 8 to his name. At this Pro Tour, his blue devotion deck strays from many other decks. Rather than staying mono-color, or adding white, Larsson' Dark Skies adds the value of black with Thoughtseize, Doom Blade, and friends (though he personal prefers to call the deck, "Merfolk in De Skies"). Larsson was also more devoted than other blue players with his devotion. Rather than staying at eight Flying Men (Judge's Familiar and Cloudfin Raptor) Larsson also added Galerider Sliver, which could not so incidentally give Mutavault flying. The deck plays great against Selesnya and Junk decks. And though Supreme Verdict and Jace, Memory Adept are still a problem, the counters and discard can disrupt just long enough to allow Larsson to steal a win.

However, he was going up against a deck and a person from which it would be hard to steal anything. Bram Snepvangers and his Orzhov Midrange deck were Larsson's proverbial monsters. A Hall of Famer with the same amount of Pro Tour top finishes as Larsson has Grand Prix top finishes. Certainly Larsson had played imposing figures like Snepvangers before, still early in his Magic career, Larsson can't be too used to beating Hall of Famers quite yet. Snepvangers is playing an emerging white-black archetype that uses Underworld Connections and early disruption to power into a strong mid- to late-game with Desecration Demon, Alms Beast, and Obzedat, Ghost Council. 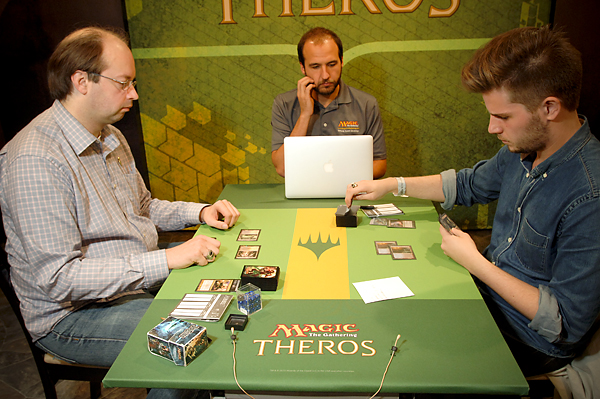 The match-up is a bit skewed towards the white-black combination. Creatures that hit much harder than their mana costs could completely outclass Larsson's 1/1s. However, Larsson was still optimistic about the match-up. "I just have to draw a Master of Waves or a Bident of Thassa." And though he was right, he was leaving out the part that also had to cast those cards past the black removal and discard Snepvangers had. He admitted that Desecration Demon, specifically, can be a large problem. "If I can deal with one of his big threats, I can still get there." But if he has to deal with multiple, it gets difficult.

Though the decks are divergent, the first game started similarly with tap scry lands (Temple of Silence and Temple of Deceit) and Thoughtseize. Snepvangers was up first, and when Larsson's hand splayed he saw Thassa, God of the Sea, Thoughtseize, Master of Waves, Frostburn Weird, and three dual lands.

"That's not quite what I expected." Snepvangers mused.

"I figured that much," was Larsson's reply. After Snepvangers took the god, the Swede's return fire saw two Desecration Demon, Sin Collector, Underworld Connections and a Plains. Larsson took the Sin Collector without much thought. 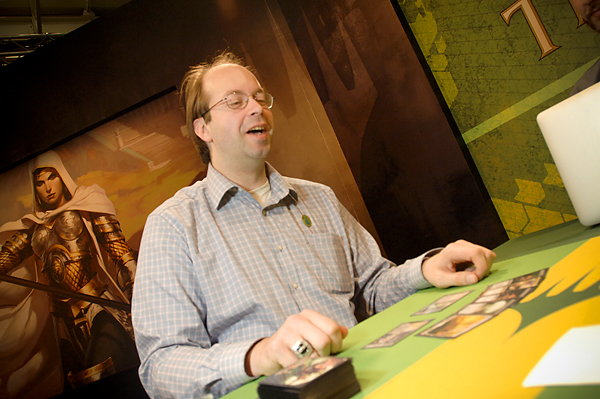 Snepvangers' deck also had some unexpected surprises for his opponent.

Larsson looked like he could overtake the impending Demons if he were just able to cast Master of Waves with six blue mana symbols on the field (two Frostburn Weird and a Galerider Sliver, plus the Master itself). However, it wasn't meant to be.

The turn before the Master was to come down and add 14 additional power to Larsson's side, Snepvangers cast a clutch Thoughtseize to save himself an onslaught of weenies for a measly 2 life and a black mana. That was the game-winning turn for the Hall of Famer.

Soon the two Desecration Demons found their way to the battlefield while Larsson's hand was devoid of answers, and they proceeded to mercilessly rip Joel Larsson apart, moving play to the second game.

Sideboarding for the second game looked like this: Out went the suboptimal Lifebane Zombie for Snepvangers, which were replaced with Devour Flesh and Doom Blade. While Larsson took out his own useless Blades and brought in more discard and counterspells.

Snepvangers again opened with a Thoughtseize. Larsson showed Master of Waves, Cloudfin Raptor, Syncopate, Thassa, God of the Sea, Frostburn Weird, and Mutavault. "Ooh," was all Snepvangers mustered, amused by the ingenuity of Larsson's deck. The Weird was taken, so Larsson started with the 0/1 evolve creature.

Larsson anticipated Thoughtseize number two, as the Dutchman had not taken the Thassa as he had assumed, so he preemptively laid the cards on the table. Unsurprisingly to him, Snepvangers showed the second Thoughtseize, taking the god and putting it in the graveyard. Larsson could only laugh at Thoughtseize number three. By this point Larsson had drawn a Bident of Thassa, but Snepvangers' greedily took a creature, as Larsson did not have the mana to cast, nor many creatures to turn on, the legendary enchantment artifact.

"Hmm." That was Snepvangers when a second Thassa was ripped from the top. He cast Sin Collector to take Syncopate, and Larsson was left with Bident and the top of his deck. Luckily for the Swede, Snepvangers had only Underworld Connections to find gas, and no actual gas yet. 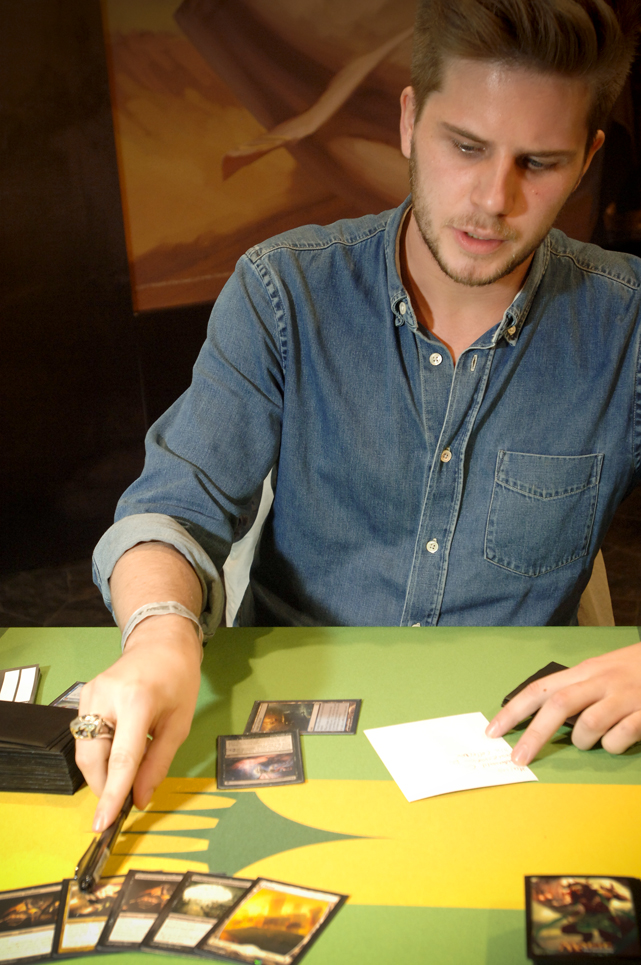 Larssen hopes to recover from multiple forms of hand disruption with a powerful blue artifact.

With both his enchantments and sorceries taking his own life total, Snepvangers was actually threatened by small fliers Dark Skies offered. Mutavault gained flying thanks to the Galerider Sliver knocked the Dutchman into single digits. And the nail in the coffin was Bident of Thassa that Snepvangers had declined to take turns ago. Snepvangers had no response and the now 5/5 creature Thassa joined the 1/1 flying men and refueled Larsson's hand.

"No." Snepvangers said with a smirk. He added during sideboarding, "Maybe three Thoughtseize is too many."

Larsson told me after the match that it's easy for opponents to undervalue the Bident, but it's one of the most important cards in his deck. If either that or the Master of Waves can make a turn's worth of impact, the game will sway in his favor. He would need to do that in the last game to take a win out from under that Hall of Famer.

In the rubber game, Larsson started with a first-turn beater, which was a first for the match. Snepvangers had been wary of his opener because of the lack of disruption, and if Larsson could punish him for that, it would be bad indeed. Alms Beast, Obzedat, Ghost Council, and Hero's Downfall are powerful cards, but without Thoughtseize, a hyper-aggressive draw from Larsson would overwhelm before any of those cards could really make an impact.

"A bit slow, but yes." Snepvangers replied as he binned his Desecration Demon.

That power quickly became evident. Larsson was unable to find his power cards, despite Thassa's scrying ability. He could not find a good response to the Alms Beast, providing six damage for a miniscule four mana.

Larsson took some damage before casting, what he thought, would be a game-changing Tidebinder Mage. He attempted to target the giant beast before it was realized that it's not in fact a legal target. Mage can only target red or green creatures. "Ah. I've been playing against green-white so much, and you can target everything in that." He shrugged.

Larsson became momentarily nonplussed. He thought he had the perfect tempo answer, and now he was without an answer to not only the beast, but the brand new Obzedat, Ghost Council that was currently chilling in exile. Larsson had said he would be able to answer one big threat from Snepvangers, but two gets difficult.

"Why does it have to be so hard?" he exclaimed.

He continued to dig with the Thassa, but it wasn't enough. He scooped up his cards to the duo of white-black beatsticks.

Though Joel Larsson's Dark Skies has a great match-up against Selesnya and Junk, and a good post-board match against more pure control decks, value creatures, like the ones Snepvangers' Orzhov deck provides, are the deck's worst nightmare.

3 Thassa, God of the Sea

4 Master of Waves 3 Bident of Thassa