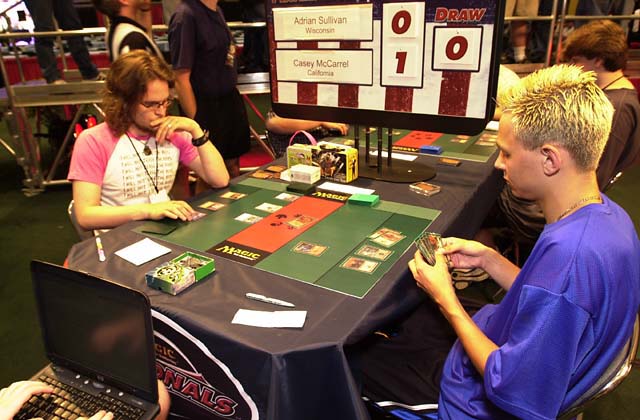 Adrian won the coin flip, and surprisingly decided to draw first. In this case it was a good idea, as he had to mulligan his opening hand. Casey started the game off strong with a turn two Rogue Kavu, and Adrian answered with Vodalian Hypnotist. The Rogue Kavu attacked, and Adrian decided not to block, commenting "Eh, I was only bluffing!" Casey continued to build up his weenie swarm with a Yavimaya Barbarian. Adrian responded by simply playing a land and ending his turn. Casey attacked with the Barbarian and Kavu, and this time Adrian decided to block the Kavu with his Hypnotist. He then played Pollen Remedy to keep the Hypnotist alive, and used the other two points of prevention to receive no damage during the attack step. Casey then played a Thornscape Battlemage with red kicker, shooting down the Hypnotist.

Adrian played a land and sent the turn over, and Casey continued to apply the beatdown with the Battlemage and Barbarian. Casey improved his board position even more by playing Thornscape Master. Adrian answered with Armored Guardian. On the following turn, Casey was not intimidated, and attacked with all of his creatures- including the Master. Adrian called Casey's bluff and blocked the Master with Armored Guardian, and the Master got +3/+3 from Darigaaz's Charm to kill off the Guardian and survive combat. Further developing board position, Casey played Horned Kavu to bounce the Thornscape Battlemage. Adrian then untapped, and killed off Thornscape Master with Exotic Curse. Still, Casey clearly had a significant amount of tempo advantage. He attacked with the Barbarian and Horned Kavu, and replayed the Battlemage with Red kicker to deal two damage to Adrian, who conceded shortly after.

Adrian chose to go first this game. Casey started off quickly with a Thunderscape Apprentice, and followed up with a second turn Rogue Kavu. Adrian answered by playing a Shoreline Raider. Casey played a Mountain, and obviously had not drawn any Forests. Still, it was hard for Adrian to capitalize on this, as he missed his fourth land drop. He played a Sunscape Familiar, while Casey used the Apprentice's Black ability to make Adrian lose a life. Adrian then attacked with the Raider and dealt two damage, and played Collective Restraint. 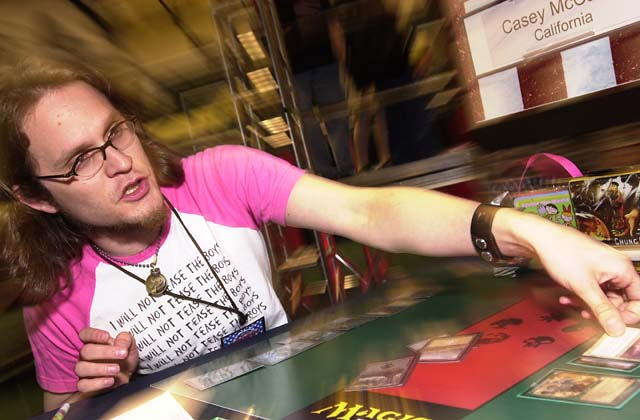 Casey paid two mana, and attacked with Rogue Kavu, dealing three damage. Adrian swung back with Shoreline Raider and played a Stormscape Battlemage with white kicker, gaining three life. He still had not draw a fourth land. Likewise, Casey was stuck at four lands and no forests. He attacked with the Rogue Kavu, and it came through again for three damage. On the following turn, Adrian answered back by attacking with the Raider and Battlemage, and then played Hobble on Rogue Kavu, which finally drew him into a fourth land.

Casey drew, still had no forests, and discarded Thornscape Apprentice. He was quickly running out of options while Adrian continued to increase his clock, and attacked with Raider and Battlemage for another four damage. Armored Guardian was summoned right after, and a forest-less Casey was put into a position that he could not recover from.

Casey decided to play first this game, and Adrian mulliganed his opening hand for the second time this match. Adrian played a plains, and missed his second land drop. Casey was at no loss for mana as he played his third land and cast Harrow, and then summoned Rogue Kavu. Adrian tapped his deck and it worked as he drew a land, which allowed him to play the answer to Rogue Kavu in Crimson Acolyte. Casey then played a land and brought out a Serpentine Kavu, ending the turn. Adrian drew a third land, and played Tidal Visionary.

Casey then attacked with Serpentine Kavu, which got through for four damage. This was followed up with Casey playing a second Rogue Kavu. Even though he only had three lands, Adrian was in a comfortable position thanks to his Acolyte and Visionary. Things got even better when he played a Stormscape Apprentice on the next turn, and commented "I've got The Solution over here!" Still, Casey attacked with the Serpentine Kavu, and as expected, Adrian made it Red and blocked with Crimson Acolyte. 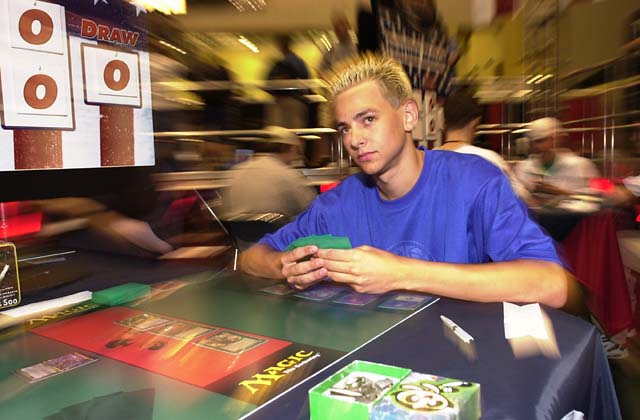 Adrian drew and was still stuck at three land, so he played conservatively and sent the turn over, which left mana open to handle all of Casey's threats. Once again, Casey ran the Serpentine Kavu into the Red Zone, and Adrian used the same Acolyte/Visionary trick to keep it contained. However, Casey played a key card afterwards when he used Thornscape Battlemage to shoot down Crimson Acolyte. This wasn't the best thing in the world for Adrian, but he did play a Shoreline Raider, which could block most of Casey's team. Once again, Casey had the answer, as he used Darigaaz's Charm to kill off the Shoreline Raider. With the path cleared, he attacked with all of his creatures, which were unblocked and dealt eight damage. To make the board position even more hopeless for Adrian, Casey played a Thornscape Master.