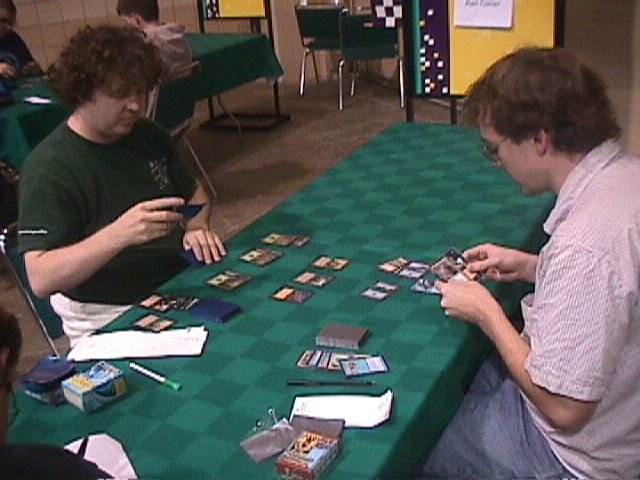 Alan Comer vs. Tim McKennaBoth Comer and McKenna started the tournament with three byes. They met each other in round four to play their first games of the day.

Comer has many PT top 8s to his credit. His most recent high finish was second place at PT Barcelona as another stop on the Kai Budde Pro Tour rampage. Comer is on team Godzilla which many consider to be the World's best Magic team. He can often be seen at an event testing with the likes of Zvi Moshowitz and Scott Johns.

Tim McKenna has just recently finished in the top 8 of GP Montreal. While this was his first top 8, his 2100+ rating reflects a consistent ability to do well at limited events. McKenna is a common sight at any GP day two. He can usually be found money drafting with Dustin Stern and Bob Maher.

Comer was playing a strong green/black deck with solid removal and bombs such as Squirrel Nest and Roar of the Wurm. McKenna's blue/white/black deck sported two of the best cards in Odyssey limited, Aboshan and Kitar's Wrath. 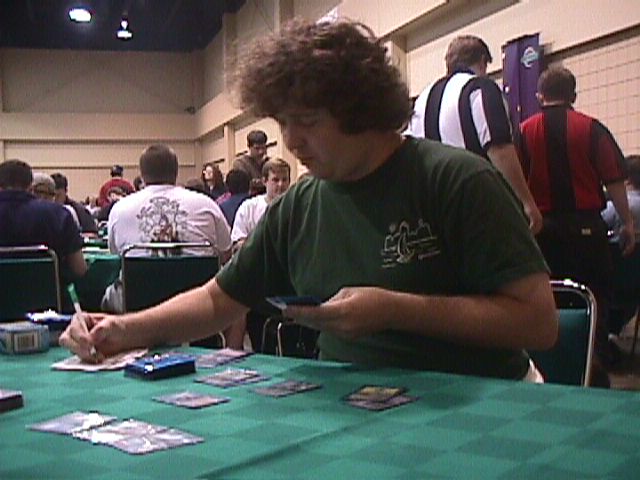 Alan ComerMcKenna won the flip and had Comer play first. Comer played a turn two Crypt Creeper that McKenna answered with a Phantom Whelp. Comer played Seton's Desire on his Creeper and crept past McKenna's Whelp for four. McKenna played a Mystic Visionary on his turn, but missed his third turn land drop. Comer capitalized by developing every turn with a Krosan Archer followed by a Werebear. McKenna failed to draw a land on four of his next five turns. He conceded under an army of Alan's monsters. 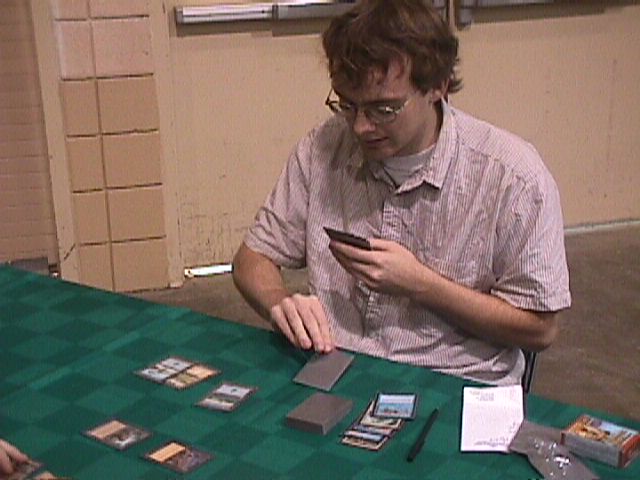 Tim McKennaMcKenna again had Comer go first. Comer played a turn two Werebear and then missed his third turn land drop, but managed to play a Leaf Dancer thanks to the bear. Comer was back online the next turn, and ripped a land on his next two turns to get to six mana. McKenna meanwhile seemed to be putting up little resistance to the many creatures Comer played. An Auramancer, Gravedigger and two Aven Flock were the only nonland cards McKenna saw for most of the game. Comer meanwhile was a flurry of removal. Keeping McKenna's side of the board clean of creatures. McKenna died to the onslaught and with regret revealed the Aboshan and Kitar's Wrath at the bottom of his deck.