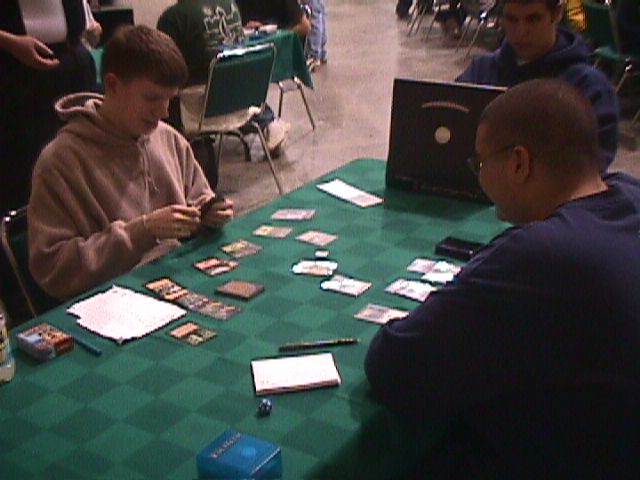 Alex Borteh vs. Bryan HubbleColumbus, Ohio's Alex Borteh is probably the hottest player in the USA right now. After making top 8 at US Nationals last summer, he followed up with an impressive finals appearance at Worlds and yet again with a win at Grand Prix . Borteh's local team, Egghead Games, even managed to win the Sideboard Team Challenge this year. Texan Bryan Hubble, on the other hand, continues to truck along in his own way, making occasional Top 16's and staying on the PT "gravy train."

Bryan started things off by dropping a turn 3 Nantuko Elder after going first, establishing very strong acceleration. All he had to show for this speed was a pair of Afflicts to knock out both of Alex's creatures, a Werebear and a Krosan Avenger. Bryan began pinging away at Alex with his Elder while removing Alex's third creature, a Troubled Healer, with a Morbid Hunger. 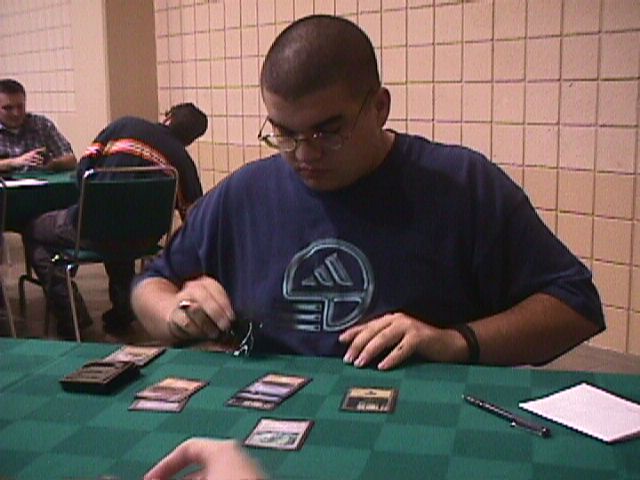 Alex BortehAlex laid a trap for Bryan by casting an Auramancer the next turn with enough mana open to use a Refresh in his hand. With the elder, Bryan had the ability to flash back the Morbid Hunger, but instead chose to cast Demonic Tutor, avoiding the Refresh. A Ghastly Demise removed Alex's next creature, a Springing Tiger, leaving Alex's sole Auramancer alone facing two newly summoned Elephant Ambush tokens. Alex, in a tight situation, decided to block one of the tokens and cycle his now useless Refresh.

Bryan left no room for Alex to abuse his tricks while keeping him constantly under pressure. After the Auramancer chump blocked on the subsequent turn, the last of Alex's creatures, he lost in quick succession.

Each player took the maximum allowable time to look through their sideboards, with Alex putting in the largest compliment of cards. 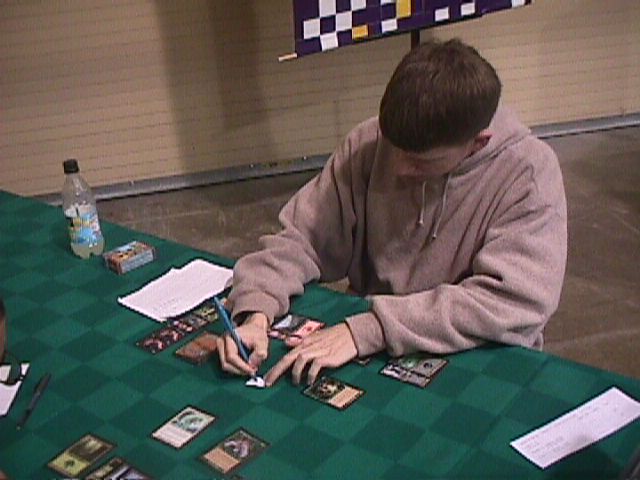 Bryan HubbleAlex chose to draw first and played a second turn Werebear. Bryan dropped a very dangerous turn 3 Leaf Dancer that immediately had the ability to evade any of Alex's would be blockers. Alex's situation looked dim the next turn as he missed his third land drop and found his Werebear on the brunt end of yet another Afflict.

Alex swiftly drew a Plains and dropped a Troubled Healer, but Bryan had the correct answer on his next turn with a Scrivener on his Afflict. Alex seemed to have trouble coping with Bryan's extreme amount of removal even though his lands were starting to flow.

The game turned around when Alex was able to cast an end step Beast Attack on two successive turns. 4/4 creatures are especially hard to deal with in Odyssey limited and two of them mean nothing less. Bryan continued to peck away at Alex with his Leaf Dancer, but Alex's pair of beasts loomed over the horizon. A Patriarch's Desire from Alex on Bryan's Krosan Avenger turned the tempo strongly into the favor of Alex. The very next turn, Alex drew an Auramancer to bring back a Kirtar's Desire which pacified another creature and completely immobilized Bryan's defenses.

Hubble decided to draw first in the deciding game and led the way by dropping a first turn Diligent Farmhand. Alex had sighed after looking at his opening hand, but this was apparently a ruse as he dropped a turn 3 Springing Tiger with the aid of a Werebear. Alex sent his Werebear and Tiger the next turn and Bryan called Alex out by blocking the 1/1 bear with his 2/2 Leaf Dancer. Alex had the Muscle Burst and successfully knocked out one of Bryan's most threatening creatures.

A few turns later, Alex's opening sigh became apparent as he didn't follow up his opening three Forests with any other lands. With only three mana, and no other color but green, Bryan's Rabid Elephant stopped Alex's assault. Bryan cast Repel on the Werebear and Ghastly Demise on the Springing Tiger, both destroying Alex's defense and locking him out of another possible land draw. The next turn, Bryan followed up with a Scrivener on the Repel, and the rest of the game was merely an example of Bryan's tempo advantage overflowing into an unstoppable offensive machine.