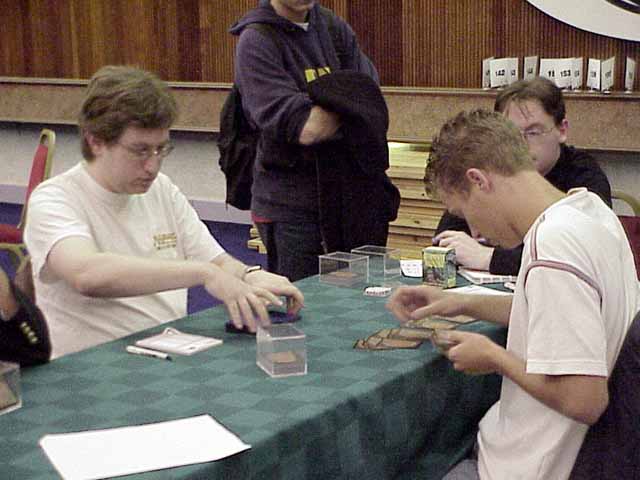 Round 4 of GP Manchester saw the big name players start to enter the fray, this match-up pitting current European champion Noah Boeken (NL) against the Grand Prix king Alex Shvartsman (US). Shvartsman has a staggering 10 top 8 Grand Prix finishes to his credit with wins in Tours and the team GP in Nagoya. How would both players adapt to the new Invasion format?

Both players chose to eschew the multicolour elements available in Invasion for stability of traditional 3 colour decks. Out of his cards Shvartsman had built a solid blue/white deck with a splash of 3 cards for green. Boeken had opted for Black/Red/Blue to take advantage of a number of power rares that Shvartsman was concerned about.

Boeken won the dice roll and opted to make Shvartsman play first, a popular strategy in the slow format. Shvartsman immediately started with a problematic creature for Boeken - an Obsidian acolyte. Boeken tried to slow Shvartsman by repulsing his Benalish Heralds only for Shvartsman to drop a Serpentine Kavu the turn after. Boeken made a Firescreamer, Hate Weaver and Sparring Golem but the Acolyte meant most of his creatures couldn't block and the black removal in his hand was effectively useless. By the time he drew a mountain Shvartsman had a prohibit waiting for his Tribal Flames on the Acolyte and the Kavu slithered through.

Game 2 saw Shvartsman start again with an Acolyte, this time of the crimson variety. Boeken opened with a Vodalian Zombie (he thought Shvartsman was playing heavier green) which Shvartsman repulsed in an attempt to draw into land. Then Boeken laid one of his bombs, Pyre Zombie, which he used to kill Shvartsman's Stormscape Apprentice. Shvartsman brought in Razorfoot Griffin and then Rainbow Crow for a flying offensive, but this was halted by Boeken's Zanam Djinn (even though it was only 3/4) and Boeken began beats with an unblockable Duskwalker. Shvartsman didn't get up to 5 land and the Duskwalker went all the way.

Shvartsman started the 3rd game with the Crimson Acolyte then a Samite Archer. "He's good right?" Boeken commented. "Him over Darigaaz every time," Shvartsman laughed (he'd elected not to play the dragon because to play those colours would give him only 18 playable cards). Boeken maliced the Archer, then repulsed Shvartsman's drake when he played an Armodillo Cloak on it. More creatures on either side but Boeken again had the unblockable Duskwalker. Pyre Zombie a few turns later and the mana to keep bringing it back put Shvartsman on a clock as he struggled to get more plains. At the time he had all 3 forests on the table and only 1 plains, restricting his options. Shvartsman tapped down the Duskwalker but didn't have enough blockers to stop the rest coming through.