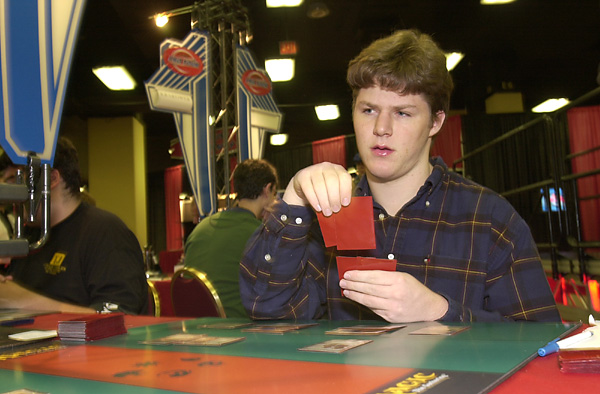 Two players with the same first name and last initial may be a recipe for classic Marx Brothers-style hijinx and misunderstandings, but these men are professionals. Standing in the face of uncertainty and adversity is their creed. Rubin has already endured three rounds played to the time limit. He asserts "it can't be my fault."

Whereas Rubin's first round feature match centered on the location of Lin-Sivvi, this match would be at the mercy of the card called Rebel Informer. Both players sported them maindeck, but Rubin had the misfortune to draw his early in game one, and the scales tipped to favor Ronaldson. The ground was snarled with rebels and Archers, giving Ronaldson time to climb his rebel chain to the Informer.

Even when he did so, he was stuck at five land, so the Informer was more of an inconvenience than a train wreck. It sent Lin-Sivvi to the bottom of Rubin's library, while Ronaldson hid from Rubin's Ramosian Sky Marshal behind a pair of Longbow Archers. On Ronaldson's next turn, he drew his sixth land, and the writing was on the wall. 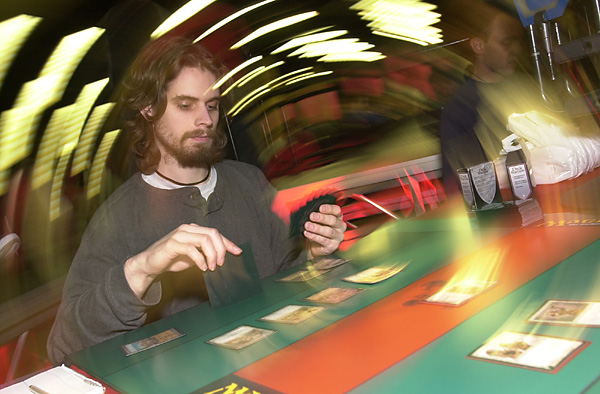 Rubin cast Parallax Wave and Ronaldson responded by Informing on both of Rubin's Defiant Falcons. Rubin couldn't use the Wave on the Informer, so he chose instead to remove Ronaldson's searchers. He cast Crusade and attacked with his creatures. Ronaldson elected not to block and fell to eight, but felt no fear. His active Informer meant he could remove the rest of Rubin's creatures and win at his leisure, which he then did.

Game two opened with Rubin's turn-one Ramosian Sergeant and he agonized over his third-turn play, eventually deciding to lay in wait. Ronaldson played Lin-Sivvi, but Rubin was more effectively armed to fight for control of the legend. He played Parallax Wave to remove Lin-Sivvi, and on his next turn, his own version of the Defiant Hero. Ronaldson made a Chimeric Idol, but that too was smothered by the Wave.

Ronaldson then cast Ramosian Sky Marshal, but Lin-Sivvi brought out the Rebel Informer, the better to show Ronaldson what game one was like for Rubin. The Wave evaporated and Ronaldson summoned a Marshal to replace his Informed-on comrade. Surprisingly, Rubin played a second Parallax Wave and passed the turn instead of attacking and Waving away blockers. The next turn, however, he did just that, Informing on Ronaldson's recruited Informer. One more attack and it was over. 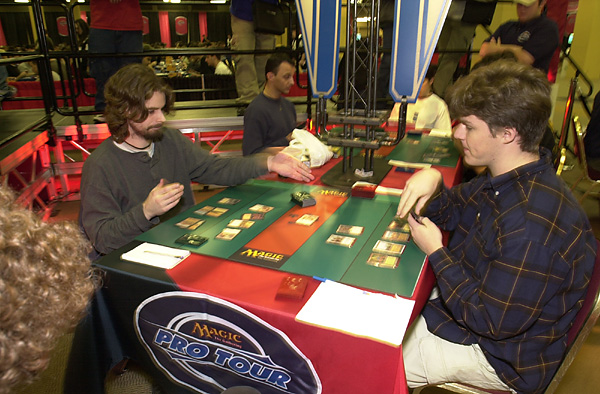 Rubin mulliganed to six cards in game three. Ronaldson's Rishadan Port kept him from making early plays. Rubin's answer to Ronaldson's Lin-Sivvi was a mere Defiant Vanguard. Ronaldson recruited first a Sergeant and then a Sky Marshal, before summoning the incredible Mageta, the Lion. This gave Rubin a chance to get his Rebel Informer and erase half of Ronaldson's board, but Mageta evened the score and attacked Rubin to fourteen. Ronaldson then cast a Chimeric Idol. Long time fans of "Jem and the Holograms" are cautioned not to confuse this kind of synergy with the wacky sentient computer of that series.

Each of Rubin's subsequent plays was destroyed by the Lion's roar, and Ronaldson even found a second Idol to help work him over. Without a Wave to stop the onslaught, Rubin conceded.