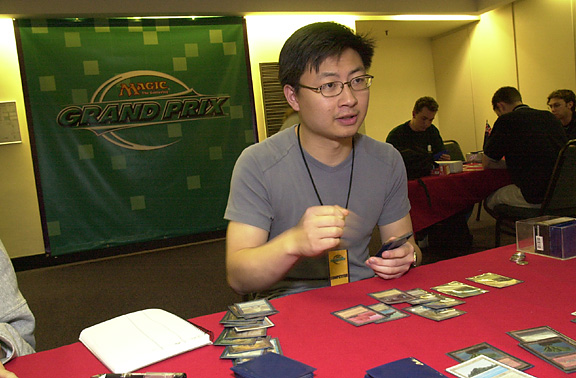 The Ben Seck - TBS - has been taking care of the invitational players and WOTC staff while in Sydney. Our Australian host was playing Dave Williams' Oblitiwha? Oblitiwho? deck. TBS started round four after his three byes that he earned by coming first at the Grand Prix Trial. Dane Coltman was his worthy opponent playing Bob Maher Jr.'s Counter Oath deck. Coltman came 22nd at 1999 Worlds and had three byes for today's Grand Prix.

This match was one of attrition. It started out slow, dragged in the middle, and didn't have a chance to end.

TBS's opening hand had an Obliterate and that dictated the first 20 turns. TBS opened with Exploration. He followed up with Fact or Fiction and followed with Horn of Greed that were both Counterspelled. Nothing was played for the following ten turns and the two started discarding.

Finally TBS cast Gush and followed up with Obliterate. He left two blue in his mana pool for Impulse but Coltman also left two blue open for Mana Leak to which TBS was heard saying, "you got me." With the Impulse Mana Leaked, Coltman got the head start on the second half of the game. Coltman was able to start attacking with Treetop Villages shortly after the Obliterate. TBS played Scroll Rack and when he Scroll Racked for five the next turn he found some "terrific news." Unfortunately he had his "terrific news," Time Warp, Pyroblasted and Coltman attacked yet again with his Treetop Villages. On the last turn, TBS had his Gush Counterspelled and with no answer to the onslaught he was defeated.

Ben Seck started the game and played a second turn Scroll Rack that was Annulled. Nothing got into play for the next 10 turns. There was finally a break in the monotony and Coltman started attacking with his Treetop Villages. TBS got Back to Basics in play only to have it Pyroblasted the next turn. However, it was able to slow down Coltman for a turn.

TBS again drew Obliterate and cast it and Gush at eight life, making an amazingly fast comeback. After the Obliteration, TBS cast Exploration and four Islands enabling him to slam down Morphling the turn after. Coltman Brainstormed in response to the Morphling but was unable to find anything to counter everybody's favorite Shapeshifter. Morphling soon thereafter won the game.

With only seven minutes left in the round the two agreed to call it a draw for their matches were just too too long.