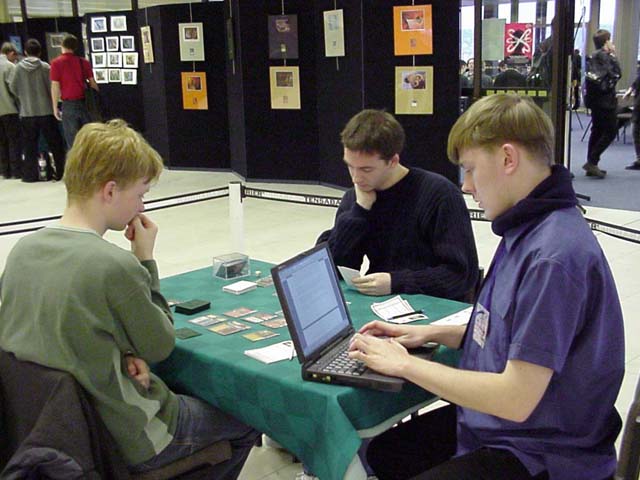 Frank won the die roll and elected to draw first in game one. Benedikt's opening draw of five land, a Rooting Kavu, and a Death Bomb was less than satisfactory but he decided to keep it, and he played the first creature as a Thunderscape Familiar made it's appearance on turn three. Klauser didn't have a second green mana for his Rooting Kavu, but made a Caldera Kavu instead on his fourth turn.

Frank meanwhile played a Slingshot Goblin turn three, and a Yavimaya Barbarian turn four. His lands in play were varied: "All five colors" he commented, pointing out his Rith's Grove and Salt Marsh.

When Frank attempted to Terminate the Caldera Kavu, Benedikt responded by throwing it at the Slingshot Goblin with his Death Bomb. The Austrian then drew his second Forest to cast his Kavu, just in time as his hand was discarded to Thunderscape Battlemage.

Without any more threats, Klauser sat there with the Kavu and Familiar, while Frank was a little low on action cards himself. He played a Treva's Attendant which traded with the Kavu, but then began to draw creatures, playing out Kavu Chameleon, Urborg Phantom, and Lava Zombie in consecutive turns.

Without drawing a spell, Benedikt had to concede soon enough as his Thunderscape Apprentice was far too little defense. With his five land opening hand, Klauser could legitimately have expected to draw a few spells, but in fact still drew more lands than spells in the game.

His opening draw in the second game was a little shaky as well, since he had only two Forests to go with his red cards in hand. He drew one on turn two before it was relevant, though.

Frank had been made to go first and summoned turn three Slingshot Goblin and turn four Amphibious Kavu . With a few creatures on his own this time, Benedikt wasn't worried, casting a Caldera Kavu that was killed by Malice, an Assault that was dealt with by Agonizing Demise, and a Yavimaya Barbarian that managed to trade with Slingshot Goblin.

This left Karsten's Slingshot Goblin as the only creature around in this game for more than a single turn - with it he reduced Benedikt to 14. When Klauser played a Magnigoth Treefolk, Frank had the chance to Terminate it but chose not to, holding back for a better opportunity and casting Thunderscape Apprentice.

Benedikt had the ideal answer for this 1/1, though, as he Zapped it and this left him with just enough mana to cast his Nomadic Elf. Benedikt also had the way to deal with Duskwalker, casting Terminate on it.

Now it was the Austrian's turn to attack and his Treefolk and Elf, newly enchanted by Maniacal Rage hit for six. This was short-lived as now it was time for the Dutchman to play his Terminate.

The board was stalemated for a time with Frank unable to get past the Treefolk with his Slingshot Goblin, and Treva's Attendant, while Benedikt was unwilling to attack with the Treefolk since then he would be attacked for five. Klauser broke this deadlock with a Volcano Imp, which attacked only once.

Frank played a Thunderscape Battlemage without kicker, then a Lava Zombie, returning the Mage to be recast with kicker. This forced Benedikt to play his Agonizing Demise earlier than he had hoped, removing the Attendant. 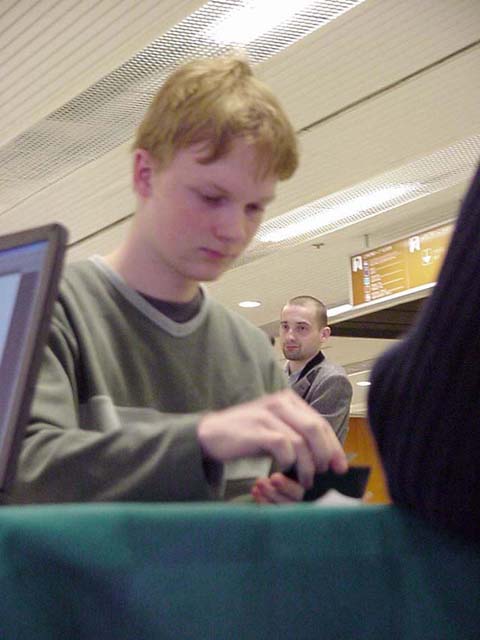 So the position was this: Frank had a Thunderscape Battlemage, a Lava Zombie, and a Rogue Kavu, and Benedikt had a Magnigoth Treefolk, a Volcano Imp, and a Thunderscape Familiar. Once again a possible deadlock was broken immediately. This time as Frank played Plague Spores to destroy the Familiar and Benedikt's only Swamp.

It was certainly a surprising thing to kill, over the Treefolk that was also unblockable and had four extra toughness. Benedikt wasn't hurt by his Swamp being destroyed as he had a second one in hand. He also drew a Kavu Scout, and a Trench Wurm over his next two turns, allowing him to start attacking with the Volcano Imp.

Frank drew nothing but two lands and a Fertile Ground over the next three turns while the Volcano Imp reduced him to four life. Klauser now had a Death Bomb in hand which he used for it's subsidiary ability to make Frank lose his last two life on his next turn.

"Probably not the most interesting matches to report", said Benedikt, and it was true that the correct play had been pretty clear in most cases so far. For the third game in a row, Benedikt's opening draw wasn't good - this time it was so bad that he decided to mulligan, keeping his six card hand.

This time Frank was also forced to mulligan, and while neither hand was that good, Klauser stopped laying land on his second turn, but only missed one land drop. Karsten took little advantage of this, as his Rith's Grove made him miss a land in a sense.

Despite this, whereas Benedikt could only play a Thunderscape Familiar, then return it to cast a Horned Kavu, Frank played a Slingshot Goblin, and a Duskwalker. With Terminate in the Dutchman's hand it looked bad for Klauser as two turns invested in bringing out the Kavu could be wasted.

Instead of removing the Kavu and attacking for five Frank just sent the Duskwalker across and played Treva's Attendant, bringing Benedikt down to 15. As Klauser did not play a land on his next turn, Frank now opted to cast Terminate, and attacked with everything.

Benedikt used an Explosive growth on his Familiar, allowing it's First Strike ability to kill an Attendant without reply. The attack brought him down to ten anyway, and although he drew a land finally on his next turn, it was only a Forest, whereas he needed a Swamp. A Primal Growth fetched him the land he wanted, and in an attempt to hold off everything except the Duskwalker he played an Assault.

This traded with the Attendant, but Duskwalker brought him down to seven. He drew a Terminate, but with only a Thunderscape Familiar in play now even the Slingshot Goblin could attack, and brought him to five.

Benedikt drew possibly the best answer in his deck - Flametongue Kavu. Even this was not enough though, as Karsten's Probe gave him a lot of action cards. Frank summoned a Thunderscape Battlemage, then cast Plague Spores on the Flametongue Kavu and Klauser's solitary Swamp, cast Darigaaz's Charm to bring back his Duskwalker and simply attacked with it twice more to win, Klauser being unable to draw an answer.