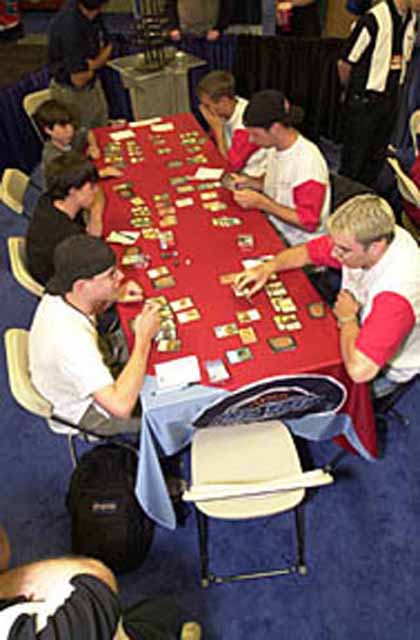 Round 4 was played for more than just 3 points in the standings. B.I.G. and Potato Nation were also playing for 40 a head. Five of the six players involved in this match are legendary money drafters. Look around any Pro Tour venue at about 3am Saturday or Sunday night and you're quite likely to see Gab Tsang, Brian Hacker, Igor Frayman, Mike Turian, and Gary Wise drafting with someone. Tsang and Wise are longtime playtest partners from Toronto who were actually teammates at last year's team Pro Tour. They never money draft against each other and despite having over 30 PTs worth of experience between them, they've never been paired against each other. Until round 4.

Mere weeks after carrying Canada to a second place finish in the Worlds team competition, Tsang was building decks for he, Hacker, and Frayman. Their 2-0-1 mark is a testimony to his skill. Turian, Wise, and Johns were also sitting on 7 points, hoping to go into the final deck build needing only 1 more win to advance to day 2.

The Nation continued their strategy of giving Turian the red/blue deck. Turian is known for playing green, but now he says blue creatures are just like little green creatures except that your opponent can never block them (because they fly). Against Frayman's blue/white deck Turian swarmed him with little blue fliers. He used Rhystic Scrying to find more and then used Brainstorm to dig up a Panic Attack that finished off the game. Fryman was complaining about Turian's top-decking skills until Turian pointed out the Brainstorm that he had used to set himself up.

Frayman played a turn 4 Defender en-Vec in game 2 and that plus an Arrest on Turian's Stinging Barrier bought him enough time to set up his defenses. However, Turian eventually used Seal of Cleansing on his Wall so he could recast it and start picking off Frayman's creatures. That plus a pair of Drake hatchling would probably have been enough but Ensnare allowed Turian to finish off his match win even quicker.

The real feature in this feature match was the pairing between Gary Wise (playing green/black) and Gab Tsang (playing green/red). Tsang had the bigger creatures in game 1, but Wise used a pair of Horned Trolls to hold Tsang off for quite a while. It looked like Tsang would finally be able to bust through when Wise cast the only black or green card in the entire format that could save him: Plague Wind! Wise had no trouble wining after breaking the stalemate with his Plague Wind.

Game 2 lasted less than 5 minutes. Wise kept a 1-land draw and never drew more land. Wise made up for his poor game 2 draw with an amazing draw in game 3. His curve included Giant Caterpillar, Silverglade Elemental, Thresher Beast, and Cateran Slaver. Tsang was actually able to stalemate the ground, but Treetop Bracers on the Silverglade finished him off in a hurry.

Game and match to Potato Nation.