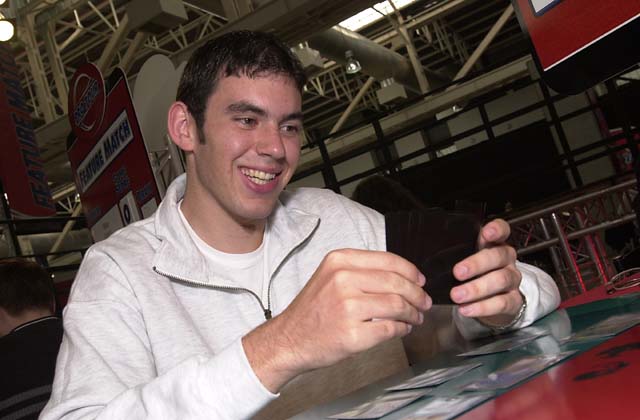 Before the round started Chris was good-naturedly joking about how Casey's drafting had screwed him over during the draft, but they both had good records so far. Chris was on 2-1 and Casey was 3-0. Casey had drafted a Rout that was coming to Chris but Casey ended up putting it in his deck anyway.

Casey's deck seemed to be some sort of Domain booster draft deck, and he was unable to cast anything after his third turn with a Swamp and two Forests in play. Chris also was playing multiple colors, and had to use a Dream Thrush to produce white mana in order to cast Galina's Knight, and then a Llanowar Knight.

McCarrel played a fourth Forest, but still could not cast anything. "why don't you use your Thrush to hook me up with some lands over here. Any color except these two will do," joked Casey. He seemed to agree that his deck wasn't very good. "I'm not going lie to you, I have a Mogg Jailer in my hand."

Chris wasn't sure whether Casey was joking about such a poor card, but the truth was revealed when Casey drew a Mountain and summoned the Jailer. Chris Repulsed it and attacked again. Even though Casey had three different colors of mana in play, he was unable to cast anything and had to scoop as Chris summoned an Attendant.

McCarrel was undoubtedly hoping to cast more spells than the Mogg Jailer he had managed. Chris joked about sideboarding in a Planar Overlay and forcing Casey to return all his lands to his hand.

This time Casey went second and started off with a Mountain, and two Plains. It almost seemed as though he was playing a different deck as he cast a Lashknife Barrier. He didn't have any more land though, and had to discard after Zapping Chris.

Benafel had missed a land drop, but found one immediately. Even with two Forests and two Islands in hand he was unable to play a spell. Casey discarded again, and Benafel summoned a Serpentine Kavu. Then McCarrel finally found a Forest, but chose to Hobble the Kavu rather than play a creature of his own.

Chris summoned a Treva's Attendant and started trash talking as he enchanted it with Traveler's Cloak. Casey tried to Tribal Flames it, but Chris had a Confound. McCarrel was reduced to playing Sparkcaster and gating itself just to get some damage in. 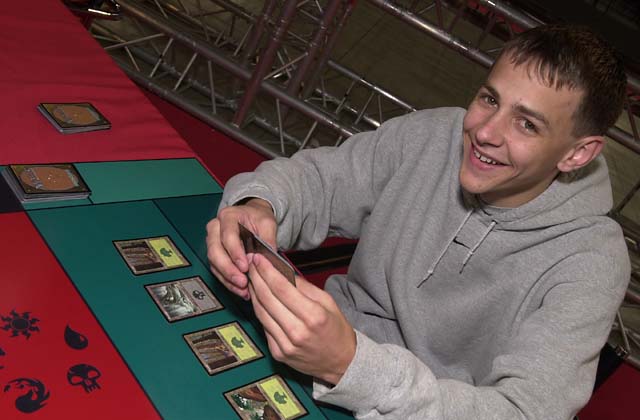 Benafel played a Dream Thrush as well and held back with some other creatures, as he realized that Rout was the only way Casey had of dealing with his board. The Thrush and Attendant reduced Casey to ten, and this forced Casey to cast the Rout.

After this both players had a hand of seven cards. Chris untapped and played a Silver Drake and a Sapphire Leech. With Casey on ten he was in serious trouble from the fliers. He didn't have any flying creatures of his own, though, all he could do was play a Nomadic Elf and a Meddling Mage.

Chris played a Strength of Unity and attacked for eight damage. Casey had no way of stopping the flyers and had to scoop after his next turn. I would say that Casey did very well to get to 3-1 with one of the worst decks I have ever had the misfortune to see in the Pro Tour.