In the fourth round of play, two of the Americans faced off against each other; David Price and Dan O'Mahoney-Schwartz. Dave won the coin flip and made Dan go first, probably a wise choice as he had to mulligan once.

Both players played lands the first three turns, Dave managed to play a Ramosian Sergeant as well. Dan, on the other hand, got out a turn four Flint Golem. He also summoned a fifth turn Jhovall Rider and started attacking.

Dave's Sergeant turned out to be good at recruiting though. It fetched a Defiant Falcon, and Dave then dropped another creature-maker, a Monkey Cage. After thinking for a good while, Dan decided to cast a Fresh Volunteers, giving David two Ape tokens. The Jhovall Rider was then Sever Souled, and the Falcon and one of the Apes went to Dan's for a visit. 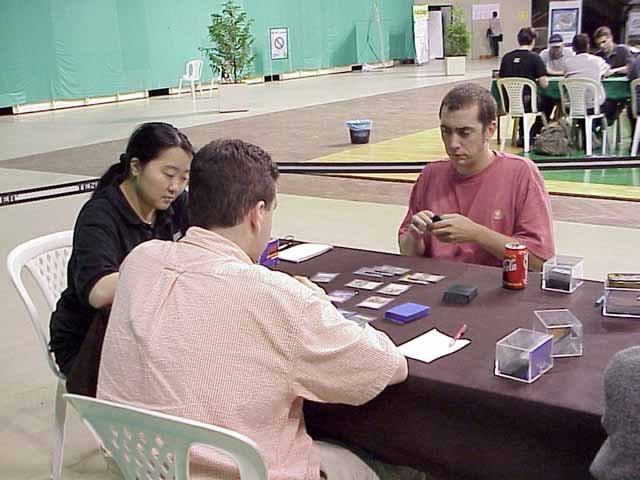 A Blockade Runner, then an Undertaker and a Ramosian Lieutenant joined forces on Dan's side of the table, and eventually a Lightbringer was summoned as well. David answered by casting a Reveille Squad and a Lightbringer of his own, and his Rebel Recruiters also fetched him a Steadfast Guard and a Thermal Glider. He then started sending the flyers over, and Dan was taken down to ten life.

When the Lightbringer hit the table, Dan chose to Vendetta it before it became active to protect his Undertaker. Unfortunately, that didn't help much. A Rathi Fiend brought him down to seven and Dave down to nine, but the Falcon and the Glider continued to hit him for three every turn. In the end, the Blockade Runner and a couple of other creatures had managed to get David down to five life before Dan, at one life, made a last, all-out attack. Unfortunately, David could block enough creatures to stay alive, and Dan scooped.

After some minutes of looking through sideboards, David had to play first in the second game. He cast a second turn Agent of Shauku, and a third turn Lightbringer, but then he stalled on three lands for the next two turns. Dan, on the other hand, didn't exactly get out any big threats. He cast a turn three Alabaster Wall, a turn two Soul Charmer and then a turn three Bog Glider. But when he attacked with the Charmer, David's Lightbringer grew big thanks to a Mageta's Boon and the Charmer went to take a nap in the graveyard. 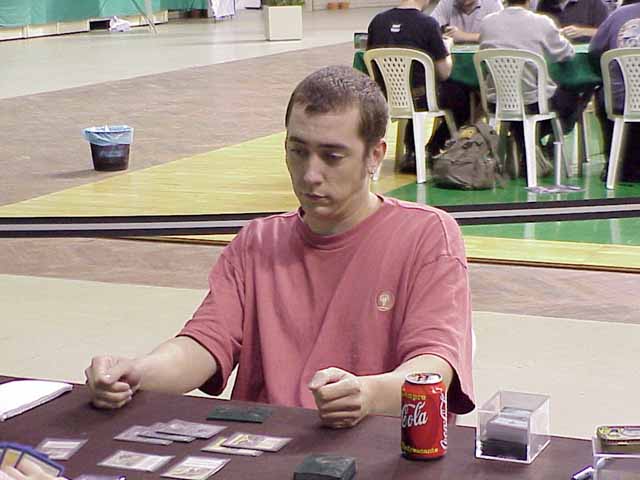 During turn six, David finally drew a fourth land, a second swamp. After attacking and losing his Agent of Shauku to the Bog Glider, he played a Noxious Field and activated it to kill the Glider. With a fifth land the following turns, things started to look better for Dave. Dan's Cho-Arrim Bruiser didn't even get a chance to recover from summoning sickness before it was Sever Souled, but a Fresh Volunteers managed to stay alive.

David then played a Reveille Squad and a Rathi Fiend while the Lightbringer sacrificed itself to take out an Undertaker. Dan on the other hand, managed to get out a Cateran Enforcer, but as David had black creatures, he wasn't able to use it to the full extent.

Things looked good for David when he drew and cast a Cinder Elemental. He also cast a Steadfast Guard while Dan got the Enforcer to hunt down and recruit a Bog Smugglers. But the Smugglers only got to attack once before time was called. David's Fiend also went looking for a friend, and a Misshapen fiend came into play before David started on his first extra turn.

Weirdly enough, David started his first extra turn by sacrificing his Cinder Elemental for seven, putting Dan at two. Dan went searching for a Cateran Kidnappers as well, and sent most of his critters over to try and get in the necessary damage. He didn't though, and suddenly Dave started wondering why he had sacrificed the Cinder Elemental - he had simply forgotten that he was up one to zero at games. Realizing that he didn't have to win the game to win, he safed it and, blocking enough creatures to survive the last attack to win the match 1-0.