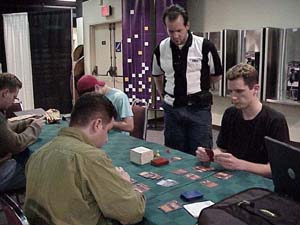 I asked both players how their decks were. "All right." said Dan OMS, noncommittally. Vienneau smiled and said "I'll be modest by saying it's fantastic."

Dan OMS is one of the famous OMS brothers and currently lives in Brooklyn. Dan won GP St. Louis as part of team Antarctica and placed second at GP Copenhagen. Matt Vienneau made quarterfinals at PT Atlanta and won GP Dallas. Both players had 3 byes, which, Matt said, "means our decks are really, really bad"

Vienneau said, "Good players draw in sealed deck because it's slow enough that card advantage is important. The good red/black decks just trade one for one." Dan OMS agreed with that philosophy. Vienneau was using red sleeves and Dan OMS was in blue sleeves.

Vienneau asked - "Are you shifty?" Dan declined to answer the question.

Both players did not mulligan for the first game. OMS started the game with a Sulfur Vent, mentioned, "It's the official land of sealed deck."

Matt played a Swamp, Mountain and a second turn Ravenous Rats, causing Dan to discard a Swamp. OMS played a mountain, then an Island and a Sparring Golem. Matt's third turn was a Mountain and a Kavu Aggressor. On Dan's fourth turn he took a little longer to think and Matt asked him, "Do you describe yourself as a slow player?"

OMS eventually sacrificed his Sulfur Vent and enchanted his Golem with a Sleeper's Robe and attacked. Vienneau chose not to block with his Ravenous Rats and Dan drew a card. When Matt played a Sparring Golem of his own, OMS played Tribal Flames, destroying it. OMS attacked with his Golem and Matt blocked with the Ravenous Rats to prevent OMS from drawing a card. OMS then played a Tower Drake.

Vienneau kept up his part of the offensive by attacking with the Aggressor and playing a Firebrand Ranger and Slingshot Goblin, which would come in handy against Dan's Tower Drake if it could remain in play long enough to recover from summoning sickness.

Dan played another land and followed with a Hunting Drake, bouncing Vienneau's Slingshot Goblin. He played Sinister Strength on his Golem and attacked. Dan played another creature; a Phyrexian Slayer and Matt conceded given the overwhelming force he was faced with.

Vienneau decided he would draw again for game two. OMS started by mulliganing once. OMS started with a swamp and followed with a mountain and Matt used Cursed Flesh to kill the Ranger and played a Kavu Scout on the next turn. 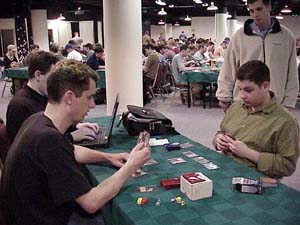 Dan played a Sparring Golem then a fourth turn Scuta with kicker. Matt played Do or Die to kill the Sparring Golem and Terminate to get rid of the Phyrexian Scuta. Dan played a Mire Kavu saying "With kicker" because he controlled a swamp. Vi thought for a long time on his turn and finally played a Hate Weaver and a Morgue Toad, attacking with his Kavu Scout and pumping it once. Dan was at ten life. Matt followed up with a Sparring Golem and now had a 4 to 1 creature advantage against OMS.

Dan thought for a while on his next turn. He was clearly in a bad position. He played Reckless Assault, a powerful Invasion enchantment that allows you to pay two life to deal 1 damage to a target creature or player. He immediately paid 6 life to kill the Sparring Golem and Hate Weaver. Matt played a Phyrexian Reaper and Ravenous Rats forcing Dan to concede.

The players were now tied at one game apiece. Matt started some friendly banter with the judge watching the table. Matt turned to me and said, "Please paint me favorably in the coverage so I can get some votes at the Magic Invitational."

Vienneau said, "You're a lucky something" as he mulliganed to six cards. "This is your chance," he said to OMS. Matt complained about his draws, "No kill game one, no land game three, this is your GP Dan!" After checking out his six-card hand, he mentioned that this hand was exactly like his previous hand, "but with one less land!"

"No cut this time, I like to be random and erratic."

Dan played Bog Down and Vienneau dropped a Phyrexian Reaper. The only creature attacking for several turns was Matt's Kavu Aggressor.

Dan was at six lands and took a long time to think about the next play. After several minutes he played Phyrexian Scuta, taking the risk of paying the 3 life for the kicker. Vienneau considered his next play very carefully. He had 2 swamps and a Scorching Lava in hand and a Kavu Aggressor in play. Matt eventually decided to attack with the Aggressor, which Dan had to block. Matt finished off the Scuta with Scorching Lava.

On the next turn Matt drew a Sparring Golem and Dan drew nothing of value. After an attack Dan was down to two life. Dan finally drew a Kavu Scout and played it. Matt attacked with the Golem and traded with the Kavu. Dan Excluded Matt's Nightscape Familiar and followed up with a Tower Drake on the next turn. Matt then drew a Lord of the Undead, which would work nicely with the Lava Zombie he had been holding for several turns. Matt got the Zombie into play until Dan played a Hunting Drake, putting the Zombie on top of Matt's library.

On the next turn, Matt recast the Lord of the Undead and the Lava Zombie, leaving Dan with two blue fliers and Matt with a big Zombie in play. On Dan's next turn he played a Firescreamer to act as a blocker. On Matt's turn he attacked with the Lava Zombie, which Dan chump-blocked with his Firescreamer. Matt played the Lord of the Undead again, along with a Hate Weaver. Dan was considering leaving his two creatures as blockers to prevent Matt from attacking next turn and finishing him off. With Dan at two life, things were not looking good for him. Dan attacked with the Hunting Drake and played a Cavern Harpy after combat, bouncing the Drake.

Matt attacked with his Hate Weaver and OMS considered his blocking options. After a minute, he traded his Tower Drake for the Hate Weaver. Matt then played a Phyrexian Reaper to end his turn. When Dan drew his next card he reacted emotionally and Matt commented, "Good poker face." Dan tapped five mana slowly as the large crowded watched. Down came the Hunting Drake again, with no red or green creatures to bounce. Matt attacked with his Reaper on the next turn. Matt said quietly, "If he wasn't so tense, I'd do a Zombie impersonation." 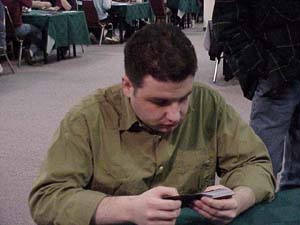 Dan blocked the Reaper with both of his creatures, leaving him without blockers. When Dan drew nothing spectacular next turn, he conceded, giving Matt his first win of the day that he had to play for.

Both players shook hands after the game. Dan mentioned that his opening hand was six land and a Hooded Kavu. Matt said "You should never keep six land, Eric Taylor did an article on the Dojo a long time ago and he pointed out that the math was horrible. You always mulligan six lands - Eric Taylor solved this equation!" After the match, William Jensen gave Dan a few pieces of strategy advice, but it was unclear if it would have helped. Matt and Dan talked for a while about the game, commenting on each other's plays. Dan asked, "Do you really have Flametongue and Crypt Angel?"

Matt said, "Who told you that, Jensen!?"