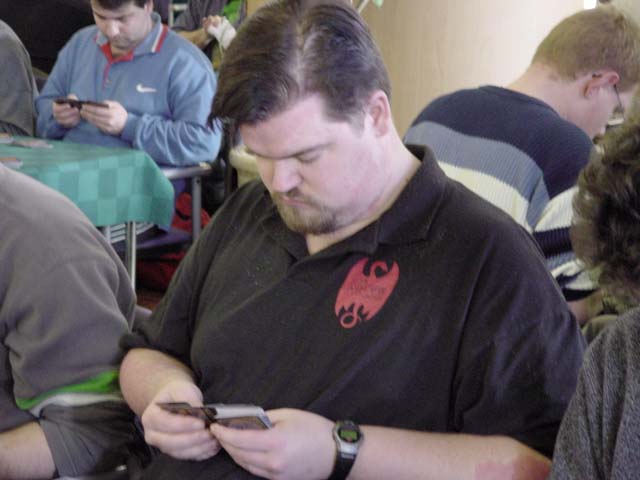 After nearly five hours sitting out the first three rounds due to byes, these two Pros finally got to play some games of Magic in round four. Both players have made the journey from America to play in this event in search of some extra Pro-Tour Points and maybe a couple of dollars into the bargain.

Both players were playing very similar Blue-Black-Red decks, with a number of identical creatures and spells in their decks. The general consensus is that the Blue-Black-Red decks are just on average more powerful than the average Green or White deck and so it's no surprise to find these two players playing these colors.

Kibler was forced to mulligan his hand in the first game, and found himself set back further still as Kastle removed Kibler's Hate weaver and Cinder Shade with a Zap and Cursed Flesh. Kibler was able to return the favor by nullifying Kastle's Hooded Kavu with a Mourning, and taking out Kastle's Viashino Grappler via a Reckless Assault. The Reckless Assault and a Pouncing Kavu attack from Kastle started to take Kibler's life total precariously low. However with an Exotic Curse for Kastle's Pouncing Kavu Kibler was able to stall his opponents attack and start focusing on dealing his opponent some damage. When Kibler tapped out of Black mana for a Phyrexian Reaper Kastle decided it was time to rid himself of the Mourning and he Repulsed his own Hooded Kavu. On only four life Kibler's Reckless Assault that had served him well earlier in the game now sat largely unusable, but he was able to remove the Hooded Kavu permanently with a Tribal Flames. The game still looked to be in Kastle's favor as he was holding three or four cards all the time, however he spent a couple of turns not casting any spells at all, whilst taking six a turn from Kibler's Reaper which was now getting pumped by a Power Armor. Kastle eventually got a Phyrexian Slayer into play but it still looked like Kibler might be able to race. However once Kibler had taken one hit from the Slayer and was on only two life a Shivan Emissary from Kastle quickly took up chump-blocking duties, and Kastle's Slayer was able to deal the final two to win him game one. 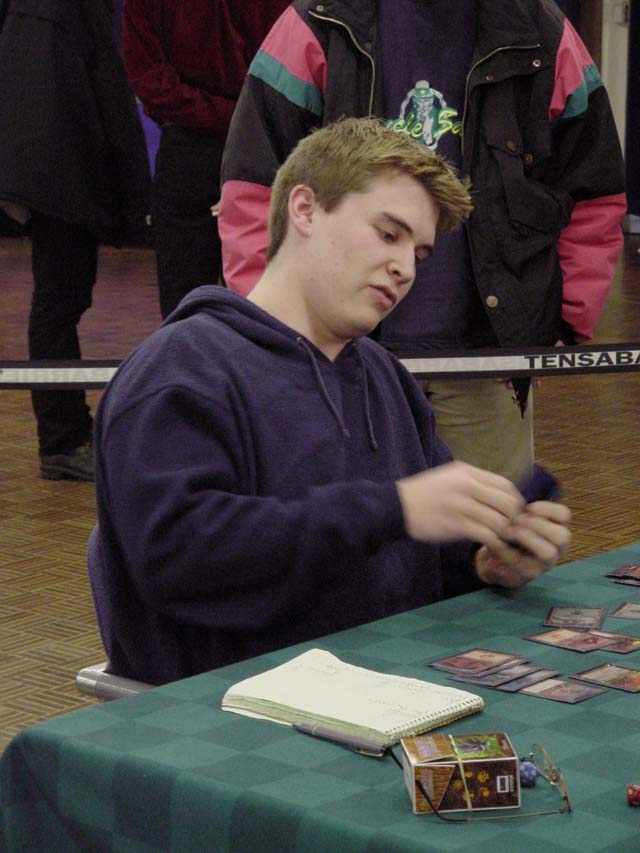 Game two started with an early race as Kibler was not prepared to trade his Hate Weaver for a Vicious Kavu of Kastle's, and instead took eight from the Kavu over the first few turns of the game. Once Kibler held back the Weaver he found it taken out with a Scorching Lava, and his next play - a Faerie Squadron - met a Shivan Emissary on it's way to the graveyard. With both players having trading cards on a one-for-one basis, the game looked pretty even until Kastle unloaded with a Kickered up Hypnotic Cloud on his sixth turn. Two decent creatures and a Recoil found their way into Kibler's graveyard having made no impact on the game en route. A Pouncing Kavu and then additional Vicious and Hooded Kavus from Kastle's side soon swung the game massively in his favor. With a Repulse to take out one of Kibler's few remaining blockers Kastle was soon able to force through the winning damage.