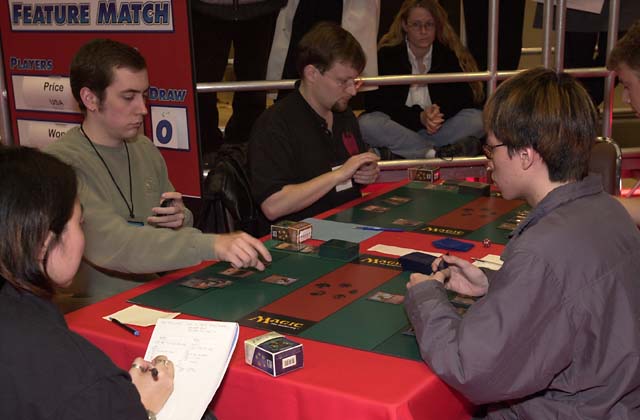 In the fourth round of 2001 Pro Tour Tokyo, David Price from the United States faced Chen Yu Wong from Taiwan. While most players know Price's accomplishments, which include one Pro Tour victory, Wong is more unknown. However, he is one of the best Taiwanese players. The nickname "Doctor" was given to him because he likes making decks, and the good Doctor's decks must be pretty good too as he managed to become the Taiwanese National Champion last year. He has also made the Top 8 in the APACs.

For this tournament, Wong had chosen to play a black, red and blue controllish decks. The deck consisted of quite a lot of gold cards, including Recoil, Void and Crosis, the Purger. In addition, Wong added library manipulation like Fact or Fiction and Opt, and some burn spells. He also played a Yawgmoth's Agenda in his deck. Price was with a kind of similar red and black deck with burn, removal and a few creatures like Skizzik for the victory. 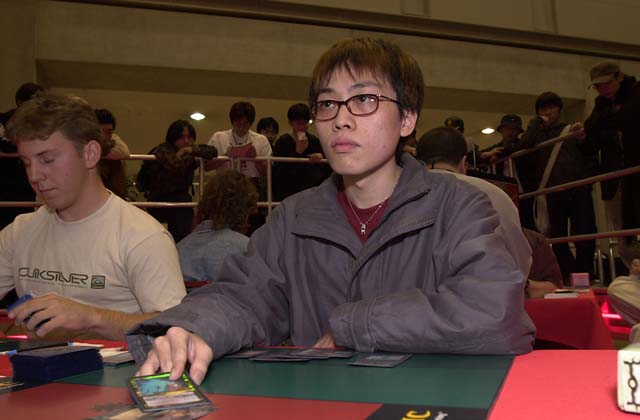 Price used one of the Ghitu Fires to kill the Nightscape Familiar, which seemed to be a wise choice. Wong didn't play anything but land for the following two turns. Meanwhile, Price got out a Nightscape Familiar of his own. Then, during Price's fourth end of turn step, Wong cast Fact or Fiction, flipping over a Terminate, a Urborg Volcano, a Flametongue Kavu, an Opt and a Salt Marsh. After a bit of thinking, Price split up the cards, and Wong picked the pile with the Terminate, Urborg Volcano and Opt.

During his following turn, he played an Urborg Volcano. He then passed priority, and when Price attempted to attack with his Familiar, Wong Recoiled it, forcing Price to discard a Terminate. The American cast another one though, and Wong Opted during his end of turn step to find something useful.

Wong obviously found something, because during his own turn, he played Flametongue Kavu, killing the Familiar. Then, Price showed that he had Flametongue Kavu in his deck, too, by casting one. But it wasn't allowed to live for long. Wong quickly Terminated it.

During his next turn, Price played Void. Wong thought for a while, then he chose to play Fact or Fiction in response. The cards he flipped over were an island, a mountain, an Urza's Rage and two Nightscape Familiars, and Wong chose to take the pile with two lands and the Rage. Price then called three for the Void, stripping the Rage out of Wong's hand. He didn't get anything else though, as Wong revealed two Fact or Fictions and lands.

The following turn, Price played a Skizzik with kicker. Wong didn't have any immediate way of dealing with it, so he cast one of his Fact or Fictions. He then flipped over an Exclude, two lands, a Void and a Yawgmoth's Agenda. Price chose to put the Agenda in one pile and the rest in the other pile, and Wong felt that he had to take the biggest pile. He then used the Exclude to counter the Skizzik.

None of the players did anything but play a land during their next turns, but then it was Wong's turn to play a Void. He called two, forcing Price to discard a Terminate. The American still had a Void, a Ghitu Fire and an Urza's Rage in his hand. During Price's next end of turn step, Wong used another Fact or Fiction. This time, he got an Exclude and an Opt, letting an Urza's Rage and two lands go to the graveyard.

Finally, Wong made his move. He played a Crosis, the Purger that looked pretty mean. But Price had enough mana to Ghitu Fire it during his turn. Wong Opted, and then he cast another Crosis, the Purger. Unfortunately, Price had yet another Ghitu Fire, and the second Crosis joined the first one in the graveyard.

Price cast another Void, calling three. In response, Wong Recoiled one of Price's lands. He then discarded an Exclude, flashing a Terminate. The next turn, Price played his third Void, this time for two, and the Terminate was gone.

Wong then cast a Void of his own, calling three. That seemed to be the right choice, as Price lost both the cards he had in his hand, two Urza's Rages. Wong then played a third Crosis, the Purger during his following turn. But Price had drawn his fourth Void, and when the third Crosis went to the graveyard, Wong conceded: "I lose."

The second game was way faster than the first one. Price sideboarded in creatures to make his deck faster. It also helped him that Wong got a really slow start. The Taiwanese chose to keep a hand with two islands, two Nightscape Familiars, a Fact or Fiction, a Terminate and a Crosis, and he didn't play anything but lands for the first four turns. Worse even, he didn't draw a black mana source.

Meanwhile, Price's opening hand held four lands, a Nightscape Familiar, a Void and a Skizzik. He dropped a turn two Nightscape Familiar, and then he summoned a turn three Blazing Specter that immediately started attacking both Wong and Wong's hand. Price then tried to cast Skizzik with kicker, but Wong was able to keep it away by Excluding it. 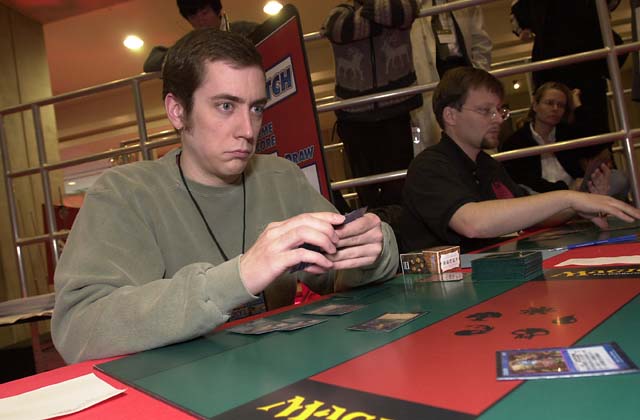 Finally, Wong drew a Salt Marsh, which he played. Still, the Specter and the Familiar kept whittling down Wong's life total, and the Doctor cast Fact or Fiction looking for answers in response to Price attacking. He flipped over a Fact or Fiction, a Lobotomy, two lands and a Nightscape Familiar. Price took a good while thinking about how to divide the cards. He looked at the board situation, then at his hand and then at the board situation again. Finally he chose to put the Lobotomy and the Fact or Fiction in one pile, the pile Wong ended up taking. Then he went down to eleven life.

However, Price had more creatures. During his turn, he played two Pyre Zombies, and Wong Opted to see if he could find removal. A Terminate knocked out the Blazing Specter, but he went down to six life. And when Price played a Void for four, taking his Fact or Fiction from his hand, Wong conceded.