Round 4 Feature Match:
Down a Leak, Without a Paddle

Going into the fourth round, Matthew Costa face a tough opponent in the form of Paulo Vitor Damo da Rosa (PV). Costa had performed well in 2011, with a solid finish at Pro Tour Nagoya, and a pair of Grand Prix top 8s.

"I basically quit Magic for school until Nagoya, and after that I couldn't have run any better," smiled Costa as he explained the 17 points he currently sits on in the race to build a strong position prior to Barcelona.

PV, the Brazilian representative from ChannelFireball, is on an extended holiday in the USA, playing Magic around schoolwork, and by most accounts had a good year in 2011 also. With a Top 8 finish at Worlds and a win at Grand Prix Singapore, he couldn't complain, especially when 2012 had already seen him spend a couple of weeks in Hawaii testing for this event. 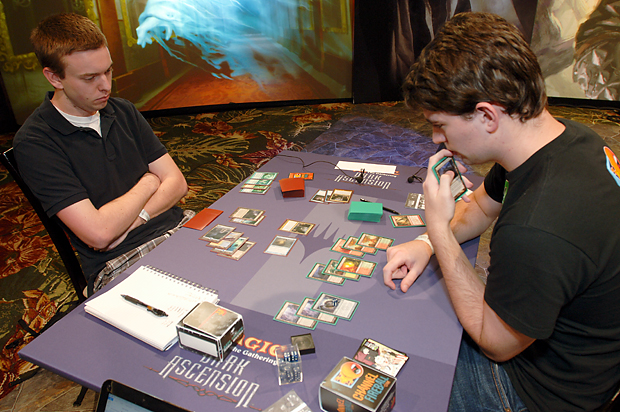 Both Matthew Costa and Paulo Vitor Damo da Rosa had successful showings last year, and both are looking to improve on that in 2012.

Costa led with a Gitaxian Probe, seeing Whipflare, Slagstorm, 2 x Inkmoth Nexus, Mountain, Forest, Kessig Wolf Run. He chose to pass playing only a Seachrome Coast as a follow-up. Turn two saw him playing the probe a second time thanks to Snapcaster Mage, revealing that PV had only drawn an additional Copperline Gorge.

Yet another Gitaxian Probe came soon after, showing that PV was working up to actually playing a spell at some point. He now had Inferno Titan and Acidic Slime to work with.

PV's first play of the game was a Birds of Paradise, which came along without incident on turn five. It didn't live long enough to tap for mana though, as Costa had a Gut Shot to take it out of the sky. Costa's life total was 14, entirely due to his own Phyrexian mana spells. He was beating PV down though, and had taken the Brazilian to 11 before a Whipflare came down to clear the board.

With the Whipflare out of the way, Costa looked to keep the pressure up, making a spirit token with Moorland Haunt, and playing a Geist of Saint Traft to further allow him to dominate the red zone. Slagstorm from PV resolved though, meaning that he had some respite from attacks, potentially enough to start mounting an offense of his own.

Costa played an Invisible Stalker, but looked irked when he saw that PV had enough mana to cast and resolve an Inferno Titan, even in the face of a Mana Leak. A Geist of Saint Traft came down, which threatened to finish PV off in relatively short order, especially when supported by a Vapor Snag on Inferno Titan.

PV thought for a little before his next play. Rather than bringing the Inferno Titan back out, he cast an Acidic Slime, meaning he had enough mana to pay for Mana Leak, while still having mana up to activate an Inkmoth Nexus should he need to block an Angel token. It was a smart play from the Brazilian, as Costa did indeed have a Mana Leak to tap him down low. 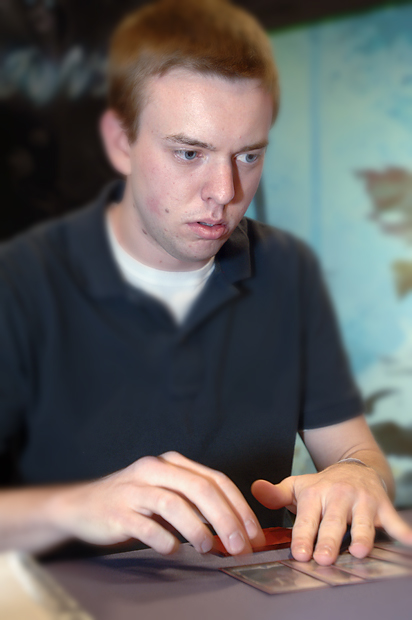 Matthew Costa lays down some Mana Leak traps for his Brazilian opponent.

PV had thought it through, and that thinking paid off. Costa did attack with his squad, and PV had exactly the blockers he required. All was far from over though, as Costa had two more copies of Mana Leak when the Brazilian tried to replay his Inferno Titan. A Ponder found Costa a Sword of War and Peace for his Invisible Stalker, and in a few short swings it proved enough to end the game.

PV was on the play, and saw the same start from Costa as in game one – a Gitaxian Probe. This revealed Mountain, Huntmaster of the Fells, Sphere of the Suns, Thrun, the Last Troll, Kessig Wolf Run, Galvanic Blast.

From here, PV's early plays were fairly scripted. He used Sphere of the Suns to power out an early Thrun, the Last Troll, but soon lost it to Phantasmal Image copying the legend. An Invisible Stalker from Costa joined the game early, while PV played out a Huntmaster of the Fells just as soon as he had enough lands in play to be safe from Mana Leak.

PV plays around leaks, rendering the soft counterspell with far less for his opponent.

An Oblivion Ring killed off the Huntmaster, but the wolf that had come with it kept trucking in, aided by Kessig Wolf Run to swing for more than just 2 a turn. Soon Costa was at just 8 life, and cast a Snapcaster Mage to Ponder, which lead to a shuffle from Costa, not happy with what he saw.

PV tried to burn out Snapcaster Mage with Galvanic Blast, but his spell was met by Mana Leak. For almost the first time in the game, PV had mana to work with, and no need to play around Mana Leak. He used this window to resolve a second Galvanic Blast on Snapcaster Mage, and to cast a Primeval Titan. That was enough to have Costa scooping up his cards. This match would go to the rubber game.

Throughout the match, PV had sufficient mana to play around Mana Leak such that it was barely a factor. On the draw in the final game of the set, he would surely be hoping to be able to continue this trend, having the luxury of acceleration, or simply time to play lands, to mean that the powerful instant could not stop his sizable threats.

For the first time in the match, Costa did not have a Gitaxian Probe to kick things off with, instead casting a Thought Scour on himself. Costa's first threat of the game was a Geist of Saint Traft on turn three. Given that PV had only been casting Sphere of the Suns and Rampant Growth, this seemed likely to be plenty good enough, especially when followed up by Sword of War and Peace.

PV thought a little before casting Green Sun's Zenith for five, fetching an Acidic Slime to get rid of the sword. Costa knew he'd have to move fast if he was to press the early damage advantage he'd begun, and cast a Vapor Snag to clear a path for Geist of Saint Traft to get into the red zone unimpeded again.

Acidic Slime came back, taking out one of Costa's lands. This was less relevant than the simple fact that it stopped Geist of Saint Traft from attacking. Costa had just seven more damage to deal, and had a little setup in getting there. He used Moorland Haunt to make a token, and a Phantasmal Image to copy Acidic Slime, destroying an Inkmoth Nexus. From there, it was a matter of getting in. While PV had a blocker for the Geist, and a Galvanic Blast for the 1/1 token, Costa was able to go over the top with a Mutagenic Growth to find the extra points of power needed to end things, while keeping his Spirit alive.