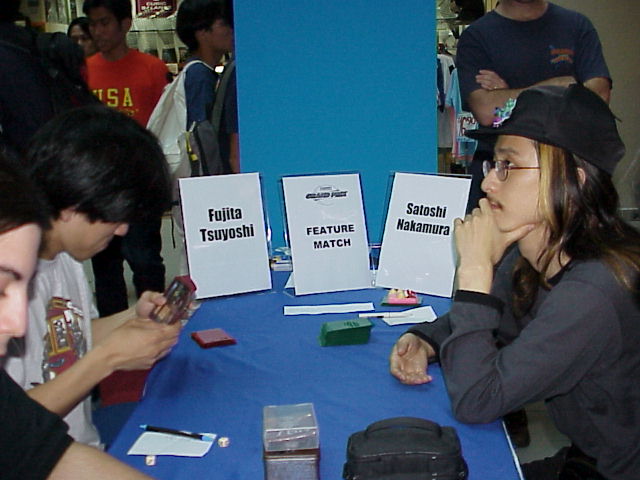 Round 4 is traditionally the best round for features at a Grand Prix. The best players usually have three byes, and are naturally paired against each other for the round. In this case, two Japanese heavyweights met up in round four: Fujita Tsuyoshi and Satoshi Nakamura. Tsuyoshi is probably best known for his recent GP Kyoto win, while Nakamura is a perennial Japanese favorite, having won APACs, and placing well in a number of Grand Prix. Their matchup was a tough one - Fujita's Suicide Black deck against Satoshi's Turboland. Though most Japanese players choose to play Rock, Paper, Scissors to decide who will play first, these two just rolled the dice. With a much better roll, Fujita decided to play first.

Tsuyoshi led off with a Sarcomancy, which was a major threat for Satoshi's somewhat slower deck. Nakamura followed up with an Exploration, accelerating his mana development. Fujita spent a long time trying to decide between Demonic Consultation, Duress, Carnophage and Unholy Strength. He was sitting on an all-but useless Wasteland but no second Swamp. He eventually decided to Consult for a Swamp, getting it around the ninth card. He Duressed to take Satoshi's Horn of Greed, realizing that this would slow Satoshi down a good bit. Satoshi realized that the situation was getting grim, so he played another Exploration and Arcane Denied it to draw three cards. His hand didn't improve significantly as Fujita dropped the Unholy Strength on his token Zombie and played a Dauthi Slayer. He played a Carnophage and Nakamura sighed. He built up a little more land and cast a Time Warp to untap and draw another card. He used the extra time to play a Morphling, almost tapping out, leaving him able to activate Morphling's ability once. He had to trade it for the pumped up Sarco token. Though he was almost able to stabilize, Fujita dropped a Necropotence and Satoshi conceded. 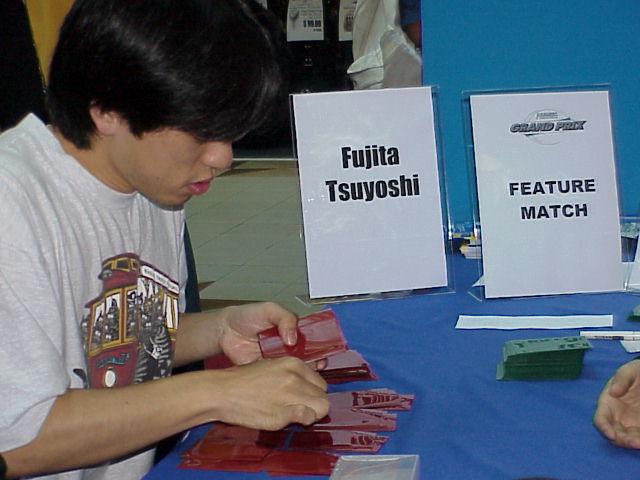 Fujita sideboarded in several threat cards, including Bad Moon, additional Necros, Firestorm and Pyroblast. He started off with a turn one Duress, and Satoshi hid his key cards, Exploration and Horn of Greed. He used the next two turns to play them and set up a huge engine. Tsuyoshi played a Sarcomancy and Satoshi played a Spike Weaver. To make it a threat, Fujita enchanted his token with Strength, and Nakamura chose to trade, rather than Fog. Nakamura exploded with his card-drawing engine, playing a second Horn, while Tsuyoshi could only Necro. Even though he was drawing five or six cards a turn, Satoshi was easily topping him, with his search capabilities. When Fujita Necroed to one, playing several creature threats, Satoshi amassed a huge amount of land and found a Time Warp. After the Warp promised Satoshi an additional eight cards, Fujita scooped. 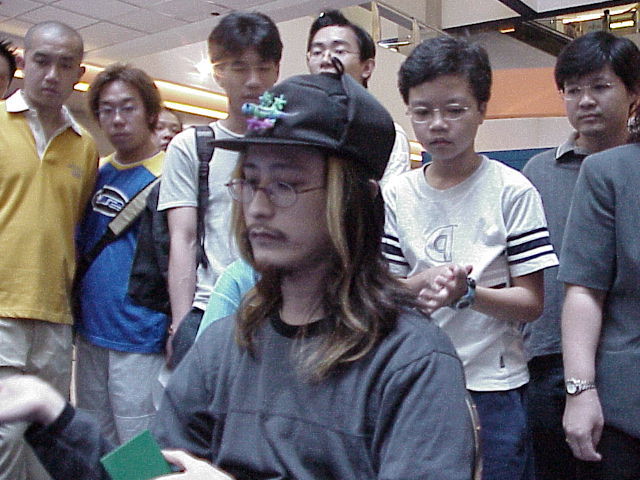 Game three, Fujita found a perfect hand, with early disruption in the form of Unmask and Duress, wrecking Nakamura's hand while he played a Sarcomancy and a Carnophage. The pressure was really on as he added an Unholy Strength to the attack. Satoshi dug for cards with two Brainstorms but, realizing that nothing was coming, he quickly scooped.