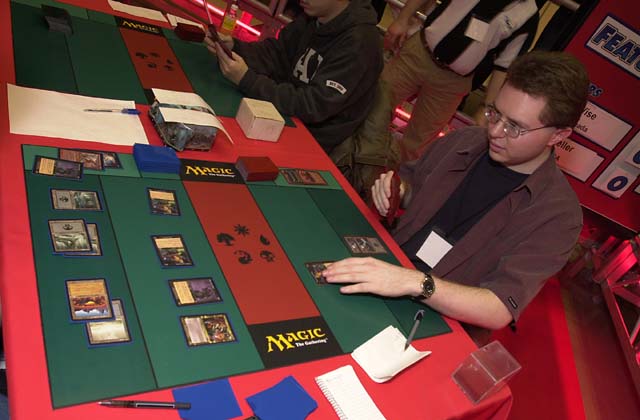 Give Gary Wise the chance to talk, and talk he shall. He'll talk to you, his opponent, himself, his deck... It's not just chaff though, because without firm concentration you may find yourself soon laughing with (or at) him and maybe that critical play will be just a bit off, the wrong mana tapped, the wrong creature cast, and many times the littlest slip and the game or the match is lost like so much dust in the wind. On the other side of the table sits the remaining half of this odd couple, the quiet and reserved Shawn "Skeller" Keller. He may laugh quietly at Gary's joke or respond sheepishly in kind, but his mind quickly returns to the game, and when you spend as much time as this man each turn, it would be hard to miss much. Shawn likes to use time to his advantage, playing slower in the first game, and speeding up if he loses the first to leave time to play all three. Of course, if he wins game1one, then game 2 may or may not finish. This red-black mirror match brought together two Pro-Tour veterans, each having garnered Top 8's and 4's with Gary fresh off his win with Potato Nation in New York.

Wise won the die roll and laid over the course of the first five turns four 1/1's (2 Rats and 2 Nightscape Familiars). His Rats went looking for cheese (or so Gary said) but found only red burn spells. They seemed to complain little over their meals. Skeller also dipped into hand destruction a bit in the beginning of the game, Addling a Bog Down and a Thunderscape Battlemage and adding his Drudge Zombie to the fray on turn 4. Gary came on strong though, attacking into the regenerator with all his men, and losing his Rat in the process and knocking Skeller to 15. Shawn had nothing to do on the fifth turn so Gary this time left back his remaining Rat and got a point in through Familiar majority. Gary finished the turn by summoning Pyre Zombie. Shawn responded with a Flametongue Kavu taking out a Familiar while Gary was tapped out. Gary dispatched the Kavu with Pyre Zombie later only to see Shawn Keller achieve Pyre Zombie parity. The game looked pretty close, though Gary has a couple more lands allowing him more freedom in his Zombie recursion and spell casting. Many onlookers may have noted how each time the players ignored the tapped out state of their opponent and the vulnerable state of their regenerators in favor of whittling away at each other's life totals. Gary's early Rat damage kicked in eventually as he was able to sneak in a few points of damage with attacks and his Pyre Zombie and finally was able to give Shawn a very warm welcome to Pro Tour - Fireball.

The sideboarding aspect of the second game proved interesting as both players generally agreed on the bad cards of the match-up, but had completely different ideas on how to replace these weaker cards. Shawn benched his four Voids in favor of 2 Yawgmoth's Agendas and 2 Terminates. His strategy concentrated on setting up the long game through reuse of resources. Gary also got rid of his 4 Voids, a few Bog Downs, and 2 Ghitu Fires in favor of tempo cards and cards that establish presence in the game immediately and gather some quick card advantage. His sideboard choices included Flametongue Kavu, Crypt Angels, Terminates, and one Darigaaz. His only replacement that seemed questionable is the loss of Ghitu Fire, especially after its performance game 1, though the writer cannot hope to claim complete knowledge of the match up. 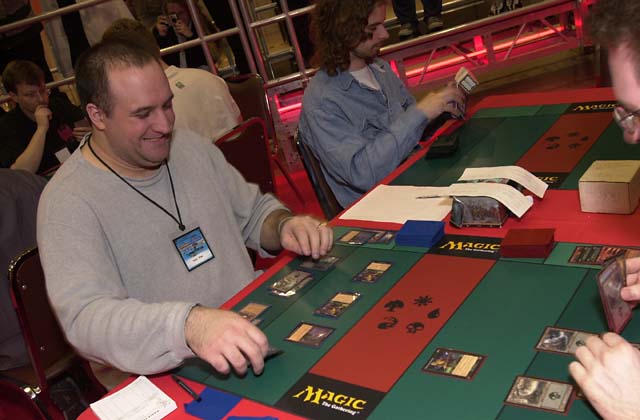 Wise seemed to be in dire straits as the game began. Keller started off quickly with Shivan Zombie and Pyre Zombie, while Terminating Gary's turn three Pyre Zombie. Gary rallied some offense with Blazing Specter, which was soon Raged. He followed the Zombie with a kicked Red Battlemage, which was Terminated. By this time Gary is precariously perched on 6 life with a Pyre Zombie looming in the graveyard thanks to a timely Terminate. Keller begins the process of killing him with Zombie. Gary has some counter play to this strategy however, since Gary has many lands and Keller has but five. Keller cannot quite seem to get the Zombie back on the board with Gary continually knocking his hand apart with Rats and Battlemages, while getting his offense rolling. Still, despite getting his Skizziks and Zombie knocked out of his hand, he finally gets to six lands and can recurse and cast the Zombie. Gary's slow-rolling offense pecks away as two guys sneak through to knock Keller to eight. Despite sideboarding two Ghitu Fires out, the other two remained loyal and one showed up to clinch the match. With Gary sitting on such a low life total, one cannot hope but wonder if Keller missed an opportunity to finish the job. When your opponent starts attacking you back rather than defending they are winning the race, players often allow themselves to get distracted. If Keller had ignored the Blazing Specter and saved the Urza's Rage for Gary, the match could have very likely ended up at least going to three games.