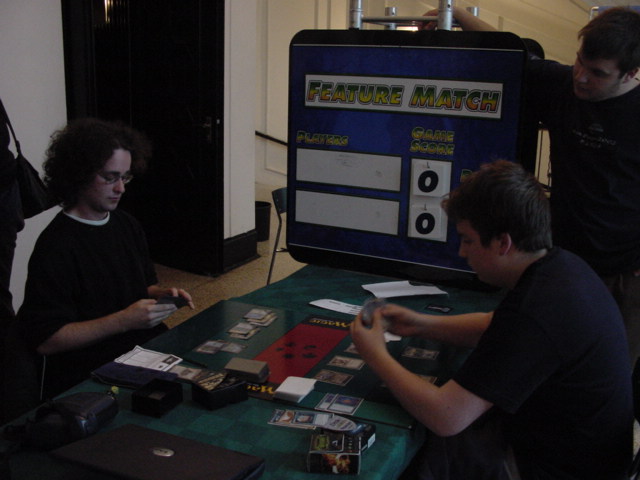 Round 4 is normally when the pro giants enter the arena but most of them are in Pro Tour Boston. It still isn’t that easy for those remaining as a very successful trial season in the host nation had produced a lot of players with 3 byes. Local Hamburg player Georg Sheljasov was one such recipient. His Belgian opponent Geoffrey Siron finished ninth at Pro Tour Osaka and has played on the Masters.

Sheljasov didn’t really have a quick start, laying island, forest, island while Siron’s White Weenie deck got very aggro with two Patrol Hounds and two Tireless Tribe on the table at the end of turn 3. An end step Cunning Wish for a Moment's Peace showed Sheljasov was not playing a usual Blue-Green beatdown deck. This was confirmed when his fourth land was a Krosan Verge. Siron dumped two Deep Analysis and a Battle Screech into the graveyard with Quiet Speculation.

Sheljasov was happy to fog the next attack and the Verge found the plains he needed to Wrath away Siron’s force. The Belgian flashed back a second analysis to restock his forces, but only a non-too impressive Tireless Tribe.

Siron had been keeping his mana open though and this meant he could Logic the Wake and the Tribe suddenly became a lot more threatening with a Divine Sacrament on the board and more than seven cards in the graveyard. 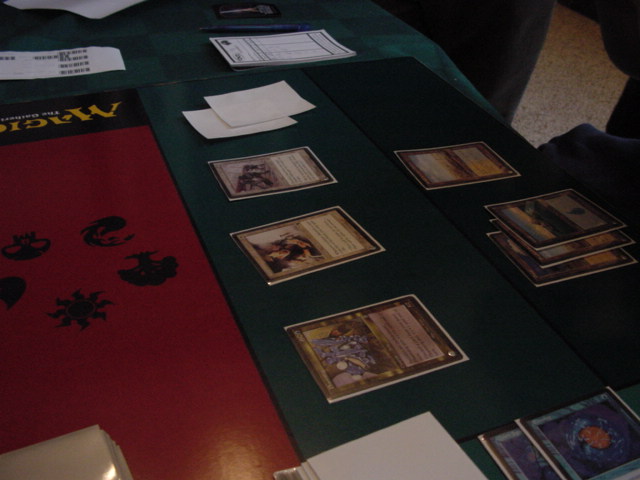 Siron started game two with a turn 1 Confessor, proving the lengths white has to go to find creatures in this format. The Belgian developed his hand with a Quiet Speculation for two Deep Analysis and a Battle Screech. His side of the table then started to resemble a horrific draft accident as a Phantatog joined the Confessor and a Tireless Tribe. He tapped all his white creatures to flash back the Screech.

Meanwhile Sheljasov was happy to slowly develop his mana base with a Verge and Far Wanderings. Moment's Peace slowed down some damage but his Kirtar's Wrath failed to get past Siron’s Envelop.

The next turn was absolutely savage as Siron dropped Divine Sacrament, pitched the remainder of his hand to Phantatog, making it a 6/7, gaining five life off the Confessor, and also gaining threshold for the Sacrament. Siron’s “bad draft deck” had suddenly put Georg Sheljasov on the receiving end of a 21 point kick in the nuts.

Not exactly how the format is expected to go.

After such excitement game three was very much an anti-climax as Siron mulliganed to five and stuck on one island. He found a plains to make a Patrol Hound just after Sheljasov had made Mirari’s Wake. Mirari followed and a second Krosan Verge gave the German a ridiculous 14 points of available mana.

The abuse began. Quiet Speculation fetched Deep Analysis. This was flashed back and forked to give the German four cards. He then cast Far Wanderings thinking he had threshold but a quick count revealed he could only fetch one land.

Siron dropped Divine Sacrament but it was a little late as Sheljasov annihilated his team with Kirtar's Wrath, gaining two spirit tokens to rub salt into the wound. Siron’s own Sacrament was against him as it boosted the spirit tokens to 3/3. When the Wish engine started rolling it seemed no way the German player could lose.

The game then got a little controversial. Sheljasov discarded, passed the turn and then realized he still had more than seven cards in his hand. A judge was called and after some thought and consultation with the head judge it was decided that the German couldn’t have got enough of an advantage and was only awarded a warning for major procedural error. The game was allowed to continue and Sheljasov Synced Siron’s last hope in a flashed back Battle Screech.