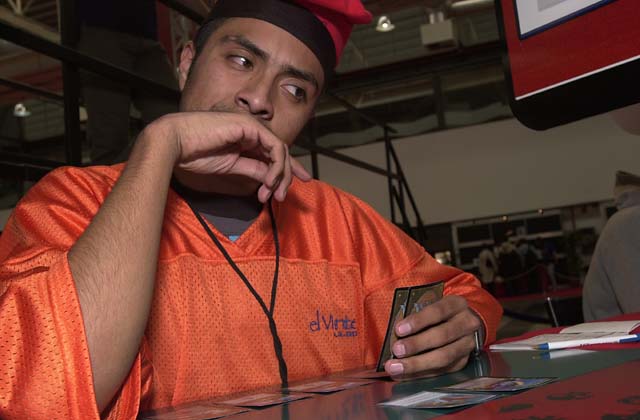 In a clash of fashion statements and cultures the mono-black dressed Japanese faced the brightly multi-colored Mexican, the first Latin player to earn a spot in the Duelist Invitational. Gerardo's colorful mood was noisily supported by his squealing pet pig while Masayuki seemed involved in a Zen-induced silence.

Gerardo kept a very risky one-land hand and paid the price in the first turns as Masayuki churned small creature after creature, swing in total impunity. Eventually the Latin-American drew his second land and played a Ravenous Rats to slow Higashino. The Japanese hand was brilliant as well but he could only cast spells with the invaluable help of his Dream Thrush.

Masayuki bounced right back into the control of the game with a Carven Harpy that gated a Ravenous Rats to create further mayhem. While the Japanese was overworking his two lands Godinez-Estrada was fighting hard to get back into the race with a handful of mostly uncastable spells. By the time he was able to balance the table, in terms of creature power, he was already six points behind in the damage race.

Masayuki then stopped attacking and took the time to use his Harpy to continuously bounce his Rats and thus destroying Gerardo's hand, and hopes, before he could reach the mana to unleash his expensive, but powerful, hand. When the Harpy-Rats dynamic duo finished its dirty work Godinez-Estrada finally found a playable spell: Nightscape Familiar.

He followed that with a kicked Duskwalker but Masayuki violently planted another nail in his coffin, and his confidence, with a second Cavern Harpy. Shaking his head in disgust for his early mana problems and the power of the deck he was facing Gerardo conceded. His defeat was sharpened by the silence of the whole game, only punctuated by the occasional roaring torrent of sound irradiating from the Budde-Wise game.

This time Gerardo came to play and his first creature was a Vodalian Zombie that Higashino Recoiled (nailing a Swamp). He then played his own Vodalian Zombie and countered Godinez-Estrada attempt to replay his copy of the ever popular Zombie. The surviving Zombie was quickly joined by a Phyrexian Slayer while the Mexican merely increased his land count. When he finally reached five (the magic number) he played a kicked Probe (discarding Rushing River and Island and forcing Masayuki to drop an Angelic Shield and a Cursed Flesh). 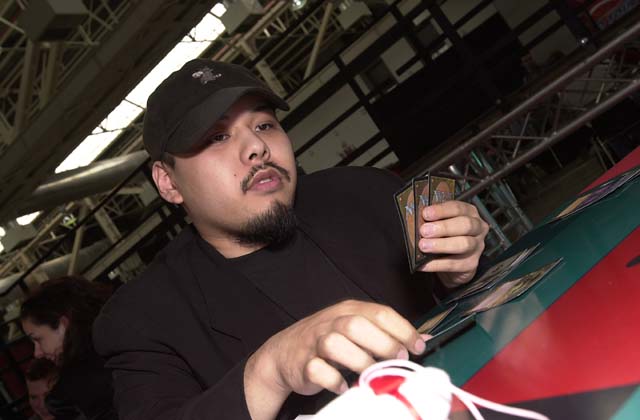 The Japanese likes his clocks fast and furious so he found a Marsh Crocodile, bouncing his Zombie, to show Godinez-Estrada a big clock. Gerardo bought some time with a Soul Burn in the Slayer but was hard pressed when Masayuki played a Ravenous Rats. Visibly annoyed with his deck the Mexican played his own Rats getting the same reaction from the Japanese. Since Masayuki discarded the Vodalian Zombie it was now obvious his great game extended further than the Marsh Crocodile-Cavern Harpy-Ravenous Rats trio now populating his side of the table.

Gerardo could only muster a Metathran Zombie to stop the bleeding and was now under the renewed pressure of the Harpy-bounced Ravenous Rats. The despair was plainly visible in Gerardo's face as the game quickly came to its expected end. The Crocodile died under a Tsabo's Decree and not even a second chump blocking Ravenous Rats could hold the fort long enough for Godinez-Estrada to find a miracle answer in his deck.