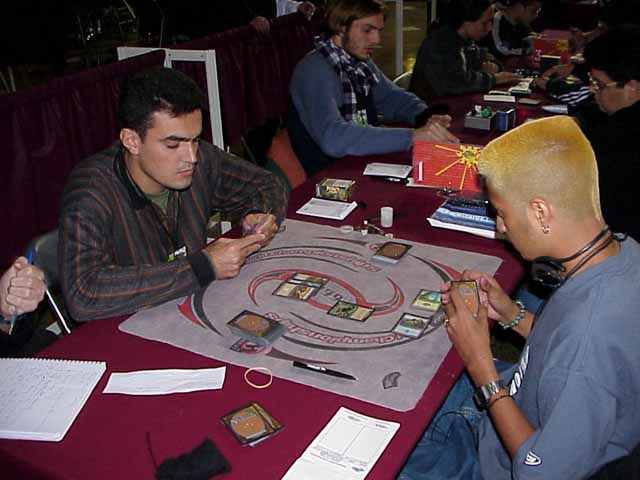 The feature match for Round 4 pitted Sergio Longo Jr., from Sao Paulo, Brazil, versus the well-known Gerardo "Chiclick" Godinez-Estrada of Mexico City. Both players had dominated their first draft tables, and were proud to be undefeated so far. After this match, however, only one would still have that distinction.

Sergio won the die roll, and chose to draw. His opening hand contained only one land, so he decided to mulligan. After a quick shuffle, he presented his deck to Gerardo. Gerardo performed a pile-shuffle on the deck and discovered that it only contained 39 cards. Visibly distraught, Sergio searched his sideboard and playing area for the missing card. Moments later, he discovered the island resting beneath his chair.

Head judge Juan del Compare was called in to make the ruling. Because Sergio had presented an illegal deck to his opponent, he was issued a game loss.

Taking his penalty in stride, Sergio quickly shuffled up for the next game. But Gerardo's fast green-blue beatdown deck immediately took the initiative. Gerardo played Pygmy Razorback, Silt Crawler, Blastoderm, Coastal Hornclaw, and Silverglade Elemental, making the most of his mana curve.

Although Sergio managed to get out a few small blockers, his creatures were no match for Gerardo's. Because he wanted to keep lands untapped to activate his Shield Dancer, he neglected to play the War Tax and Rhystic Deluge in his hand. He was soon overrun by a massive assault without ever dealing a point of damage, and Gerardo took the match 2-0.