Goro Matsuo, a 1997 National team member, has drafted a 5-color deck that features Draco, Questing Phelddagrif, and a Ghitu Fire along with mana acceleration in the form of Harrow, 2 Quirion Trailblazers, and 2 Fertile Grounds. His opponent, Masayuki Higashino, is playing a Treva-color deck with a splash of red. Both players are famous for their off-the-cuff remarks and humor. They bantered constantly throughout their match, often eliciting laughs from both the table judges and the crowd. 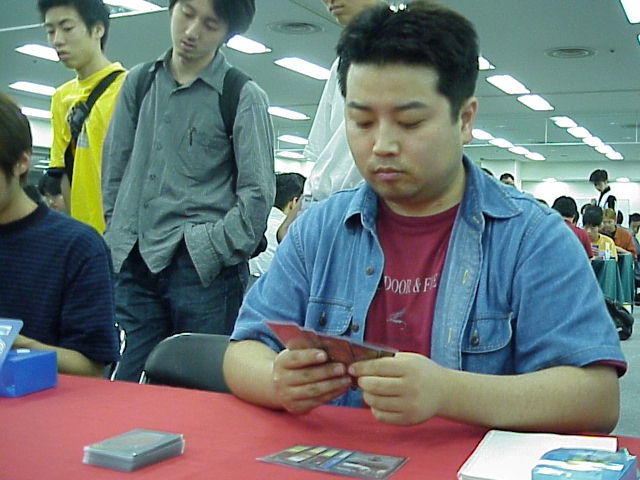 Goro MatsuoHigashino chose to draw the first game, as his is a slow deck that needs time to develop. Although he was able to produce a first-turn Thornscape Apprentice, he was unable to use it to best effect as he was unable to draw a Plains. In the meantime, Matsuo's deck performed flawlessly, allowing him to play a fourth-turn Phelddagrif. Higashino attempted to slow his opponent's offense by bouncing the purple hippo with Barrin's Unmaking. Matsuo was unfazed, choosing to play a Goham Djinn instead of replaying the hippo. Higashino finally drew into the white mana he desperately needed in the form of an Elfhame Palace, meaning he had to chump block the Djinn until the Palace could come online. Although Higashino eventually found a more permanent solution to the Djinn when he drew Shackles, his life was low enough that Matsuo was able to finish him off with Ghitu Fire.

Higashino chose to draw again this game, and was pleased to watch Matsuo mulligan. Playing both his green and blue tappers backed up by a Galina's Knight, Higashino took an early lead in the damage race, with Matsuo's first play being a Harrow, leading into a 5th turn Nightscape Battlemage played with red kicker to destroy Higashino's only source of white mama, an Irrigation Ditch. Both players emptied their hands in quick fashion afterward, with Higashino drawing into Plains and lining up a kicked Benalish Lancer and a Disciple of Kangee, and Matsuo fielding a hippo and a Volcano Imp. Matsuo was unable to topdeck a solution to Higashino's tappers, and soon scooped. 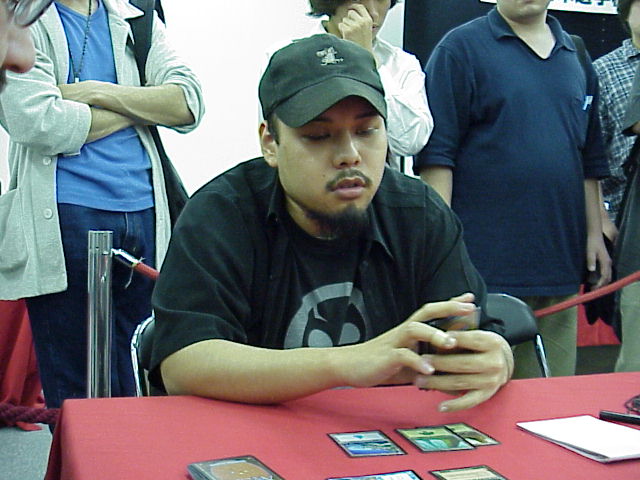 Masayuki HigashinoHigashino was forced to mulligan, but that didn't solve his land troubles. He was stuck with only one Forest for three turns, forced to discard a Tower Drake and an Armored Guardian. On the other side of the table, Matsuo played a land every turn, as well as one creature after another. His life slowly being whittled away by a Battlemage, Imp, and Unicorn, Higashino finally found enough land to Harrow and play Ancient Spider, only to succumb to Ghitu Fire.