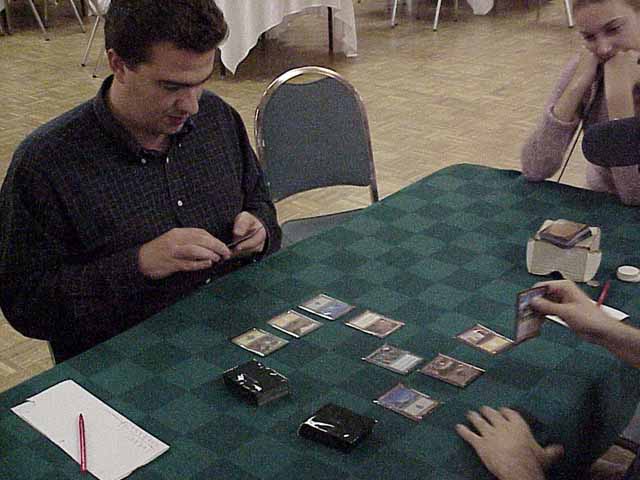 When the round 4 feature matches were announced you could hear Chris Pikula howl "Oh My!" from across the room. He and Igor Frayman are Pro Tour regulars from WAY back and the stories of their money drafts against each other are legendary. They was a healthy dose of friendly banter flying throughout the match. Pikula started by pointing out how many ratings point this match was worth for him - Frayman is in the Top 5 in the world in Limited (and just parlayed that rating into a Chicago Masters invitation).

Frayman played a turn two Fertile Ground and then dropped both Quirion Sentinel and Llanowar knight on turn three. Pikula then used Recoil to bounce the enchanted land, generating some nice card advantage. Frayman used Harrow to recover somewhat, but after starting to beat down with Urborg Drake, Pikula played Fact or Fiction and Frayman knew he was in trouble: Fact or Fiction (#2!), Stalking Assassin, Razorfoot Griffin, Glimmering Angel, and Swamp were Pikula's top 5 cards. Pikula wound up taking a pile with the Griffin and the Assassin. Frayman did manage to Exclude the Assassin, but he couldn't answer Pikula's flying beatdown. An excited Chris Pikula commented, "I can smell the points" as he gathered his cards up to start shuffling them again. Frayman response was typical Igor Frayman: "I'm winning. He's got pretty good cards, but I'm winning anyway." 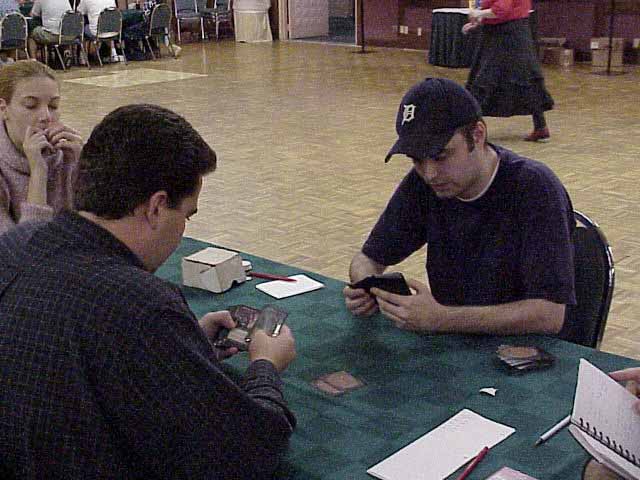 Pikula had to mulligan to start game two, but he seemed to recover just fine with turn three Tower Drake and turn four Fact or Fiction. The Fact or Fiction turned out to decide the game. Pikula had four land in play (and no more in his hand). Frayman had Benalish Trapper and Glimmering Angel in play and divided the cards into the following two piles: Vodalian Zombie, Rith's Attendant and Urborg Emissary in pile one or Razorfoot Griffin and Exotic Curse in pile two. Pikula thought for a while, complimented Frayman on a good split, and decided to take the pile with three cards. Pikula untapped and failed to draw land #5 so he had to settle for a Benalish lancer (without kicker). Frayman then cast Benalish Emissary with kicker to destroy Pikula's lone swamp. Next up for Frayman was Armadillo Cloak on his Glimmering Angel with blue mana untapped. That Angel went all the way.

Had Pikula taken the other pile he could have played out Razorfoot griffin and then used Exotic Curse to remove the Benalish trapper. With no taper on Frayman's side of the board, Pikula could have double blocked the 4/4, flying, Spirit Linked Angel with his Griffin and Tower Drake and lived to perhaps win the game. It was more a judgment call than a mistake, but Pikula's Fact or Fiction certainly would have worked out better if he had chosen differently. Frayman, of course, pointed all of this out to Pikula after the game while laughing, pointing, and showing off for his "homies." 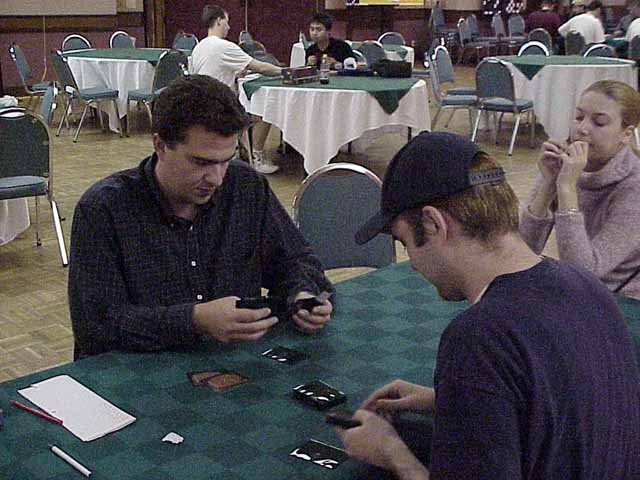 Pikula made Frayman play first in game three and Frayman came out aggressively. He played turn two Spirit Weaver, turn three Pincer Spider, turn four Verduran Emissary, and turn five Tower Drake. Pikula did manage to stalemate the board with a couple fliers of his own and a kicked Benalish Lancer, but not before he took 10 points of damage. Pikula wound up with a 3/3 Attendant and a land off a Fact or Fiction, but Pikula was visibly upset when Frayman Excluded both his Shoreline Raider and Phyrexian Slayer.

Frayman finally broke the stalemate with a 6/6 Vodalian Serpent. Yes, Pikula had Islands in play and he complained that "That's the most unfair thing I've ever seen." Not only did Frayman have a 6/6, but his Spirit Weaver was capable of pumping up the Serpent's toughness by an additional four points. Pikula threw Recoil at the Serpent. Then he Soul Burned the Weaver. Then he was finally able to double block the Serpent and trade his 4/4 Lancer for it. Frayman's swarm was now big enough to start dealing damage again, but his game got a lot easier when he drew Armadillo Cloak off the top (he had two in his deck).