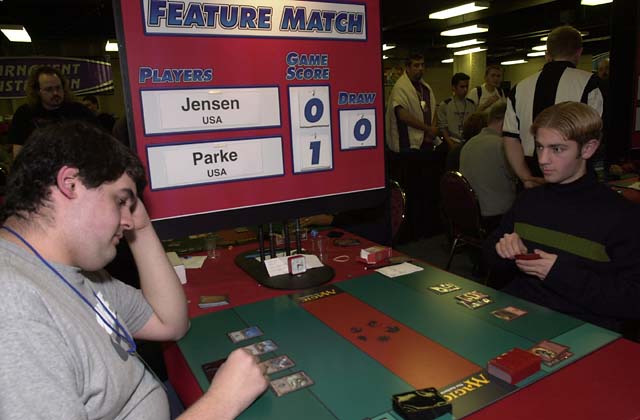 In the Blue Corner, weighing at 250 pounds, towering over his opponent at a staggering 6'8" we have the one, the only Billy "BABY HUEY" Jensen! In the Red Corner, weighing in at 140 pounds, reaching 5'10," the lightning quick Jamie Parke. These fighters have amassed quite the record today, a spotless 3-0 each. Two men enter the Red Zone undefeated, only one leaves that way.

Both players decided to draft black cards - and regardless of the fact that 5 players were drafting the black cards, neither player chose to waiver, and both were handsomely rewarded. Between the 2 decks (and sideboards) there are 3 Reckless Spites, 2 Yawgmoth's Agenda, 2 Phyrexian Infiltrator, and a Spinal Embrace.

Before the match, Jamie postulated that his chances to win the match were slim, and he was praising Jensen's deck, suggesting that he would "4-0" the table. About himself, Parke estimated his chances of top 8 at "0." Analysis by this reporter would bring him to believe differently though. Jensen's deck, while aggressive, loses some of it's punch because he's playing three colors. The 3rd color, white, is only in for a lone Razorfoot Griffin, and to help power up Exotic Curse and Worldly Counsel. He cut a Dream Thrush from his deck, and I feel that he undervalues that card's ability to make his three color deck work more smoothly.

In the first game, Jensen led off with Swamps and Plains, but no Islands. When Jamie used Ravenous Rats to force Huey to discard, he threw a Metathran Transport into his graveyard. On his next turn, he Recovered the Transport, just to draw the additional card so that he could search for a badly needed Island. On his next turn, he was able to lay an Island and play a Stormscape Apprentice. Jamie hadn't been idle all this time, mind you - he had played out a matching pair of Viashino Grapplers. Jensen used Exotic Curse to take care of one of the Grapplers, and tapped the other one. He dropped a Duskwalker with kicker, but it was forced to stay home and "play some D", as Jamie wasn't slowing down with the beats. He played a Kavu Scout, and then Assaulted the Apprentice, allowing him to get through with his Grappler. 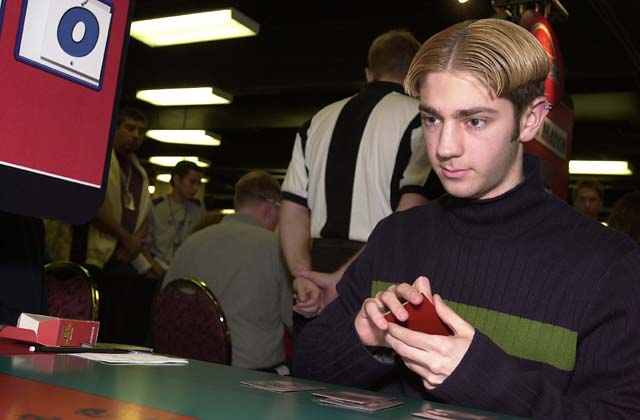 Huey drew into some more blue producing lands, and was able to lay a Metathran Transport and a Tidal Visionary. Jamie was waiting for an occasion when Billy would play out two non Black creatures, and he paid five life to Reckless Spite them both away. Huey was in catch-up mode. He Excluded a Kavu Scout, and Reckless Spited away another Scout and a Grappler. He blocked the last Kavu Scout with his Duskwalker, but Ravenous Rats got through to deal one point of damage - taking Billy to 4. Jamie threw his knockout punch; a lethal combination of Tribal Flames and Scorching Lava.

Game Two was a bit more kind to Jensen in the early game, as he led with his an Island and Stormscape Apprentice. Jamie knew that sooner or later he was going to get annoyed with the pesky 1/1, so he immediately Assaulted it. On Huey's third turn, he dropped a Phyrexian Infiltrator, and Parke responded with a Grappler. Parke served with the Grappler, and Huey opted to trade with it. Huey had mana open, and would have been able to use the Infiltrator's ability at any time (even in response to some red removal) so his decision to trade the two creatures seemed erroneous. It's possible he was trying to bluff an Exclude, but he traded his rare for Parke's common, and it just didn't seem right. On Huey's next turn he again bluffed the Exclude, and laid a Vodalian Zombie, leaving three mana available. He did the same thing on his next turn after laying a land and playing a Shoreline Raider. 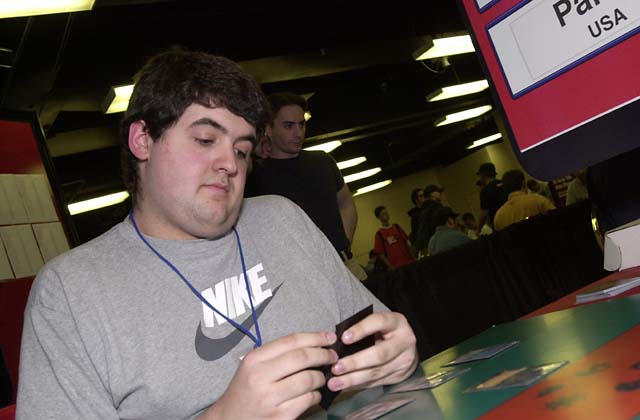 Jamie wasn't idle, though. He was probing for the Exclude, dropping a Kavu Scout. When it didn't come, Jamie used Tribal Flames to kill the Vodalian Zombie. Then, he got sick of waiting to see if Exclude was there, so he used Hypnotic Cloud with kicker to empty Jensen's hand. Jensen drew a quality spell on his next turn though, and immediately dropped it - Stormscape Apprentice. Just like in the first game though, Jamie was waiting with the Reckless Spite. Over the next few turns, Jamie dropped a Duskwalker with kicker, a Rogue Kavu, and a Phyrexian Reaper. Jensen was only able to answer with a Duskwalker. Eventually Jensen was overrun with Jamie's quick punches.