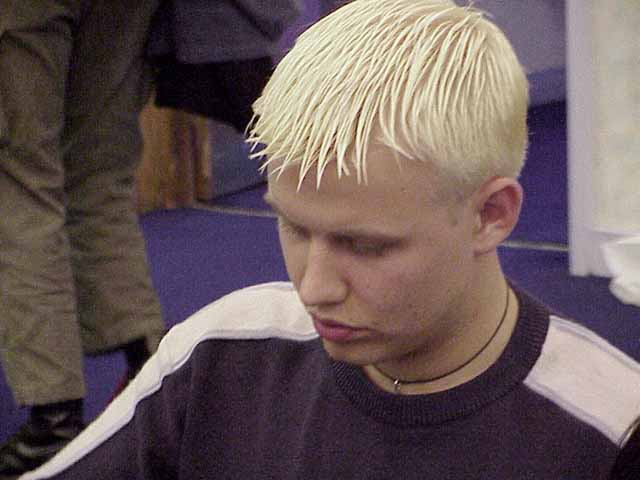 Because of the low number of players and the high number of people with three byes, a lot of name players faced each other in the fourth round. Two of them were Germany's Janosch Kühn and England's Tony Dobson. They both had three byes, and were looking to win the necessary two matches to get into the Top 64.

Tony won the die roll and he chose to let Janosch play first. Janosch had a black, green and red deck, and three turns into the game, he had one land of each colour on the table along with a Bog Initiate. Tony was with black, blue and white, and he also got to the correct coloured mana pretty quickly, during turn four. His answer to the Initiate was a Tower Drake, but Janosch had an Urza's Rage and quickly got rid of it. The German then cast a Quirion Trailblazer, optimizing his mana by getting another swamp.

Tony got out a Sapphire Leech, but it died to a Zap after blocking the Bog Initiate. He then summoned one of the fatties of his deck, a Phyrexian Reaper. Janosch cast a Viashino Grappler, but Tony sent it into Mourning, attacked with the Reaper and then cast another fattie, a Crosis's Attendant.

Janosch didn't have an immediate answer to the two big Hill Giants. He cast a Pouncing Kavu with kicker to get a blocker, and he sent the Trailblazer and the Grappler over. But Tony had a Reckless Spite that took out both the Pouncing Kavu and the Trailblazer so that he could continue his onslaught. He got out a Tsabo's Assassin as well, and things were looking really good for him as Janosch was down to five life.

But the German had an answer. He attacked with the Grappler to get Tony down to eleven life, and then he cast a Soul Burn taking Tony to four while he was getting to nine himself. So the Englishman was unable to kill him in one turn, and a Canopy Surge ended the game in a draw.

Tony let Janosch play first in the second game as well, probably a good decision as he had to mulligan once. Janosch got out a turn two Nomadic Elf, but Tony promptly killed it with a Tribal Flames after Opting during Janosch's end of turn step. The German then got out a Hate Weaver which started beating Tony down. Janosch also tried to play a Duskwalker with kicker, but Tony had an Exclude and he then cast a Tower Drake that he traded for the Hate Weaver.

Unfortunately, Janosch had a lot more creatures. He dropped a Kavu Climber, drew a card, and during the next turns he dropped a Serpentine Kavu. Tony got rid of the Climber by casting Plague Spores, and he then cast a Dream Thrush and a Tsabo's Assassin. The Assassin never recovered from summoning sickness. Janosch had an Urza's Rage and killed it, and he then sent the 4/4 Kavu over, knocking Tony down to twelve life. 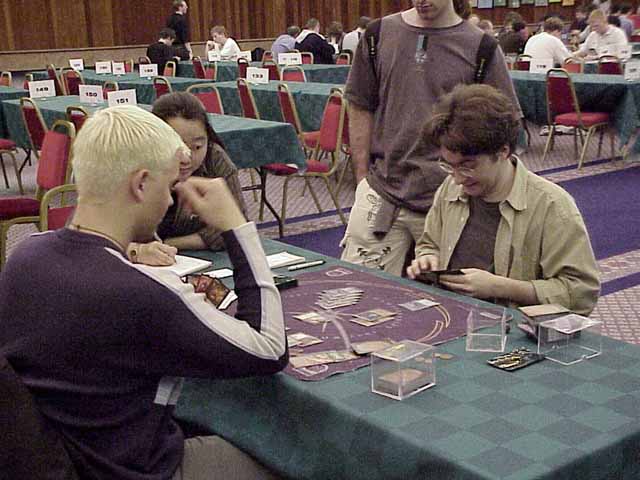 Tony attacked with the Thrush, getting Janosch down to the not-so-frightening 19 life, while the Kavu on the other side of the table was joined in his attack by a kicked-up Pouncing Kavu. At five life only, Tony cast a Crosis's Attendant to try and hold back for a little while longer, but Janosch played Tsabo's Decree calling Golems, and Tony scooped.

Kühn went first in the third game as well, playing lands only during his first three turns. Tony cast a turn three Tower Drake, but it was immediately Soul Burned to death. The Englishman then summoned a Metathran Zombie, but it was rather small compared to the kicked-up Duskwalker that entered play on the other side of the table.

Tony answered by playing a Phyrexian Reaper, but when the Reaper tried to block the Duskwalker, the Duskwalker just got the Aggressive Urge to grow bigger and kill it. Another creature of the darkness was summoned, Tony again played his Tsabo's Assassin, but it just never lived long enough to do the intended harm - this time some Tribal Flames burned it out.

Janosch continued to attack with his Duskwalker, while Tony's Zombie got Janosch down to 19 life. A Nomadic Elf joined the Duskwalker, and getting dangerously low on life, Tony decided to kill the Duskwalker by first casting Scorching Lava and then activating his Keldon Necropolis, sacrificing the Zombie to finish it off. But Janosch had a Recover, got it back and continued attacking, taking Tony down to nine.

With no permanents except lands on the table, Tony didn't really stand much of a chance. "If you have a Soul Burn I'm quite happy to concede," he said, and Janosch showed it to him and took the match.