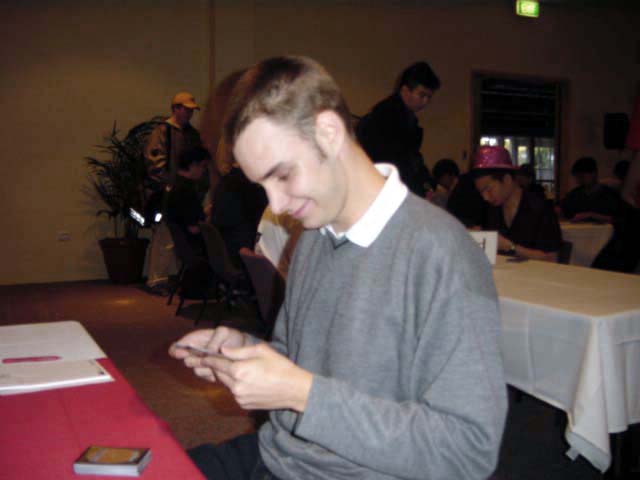 After winning the coin toss and electing to play, Doecke dropped a second turn Vodalian Zombie which was met by a second turn Sunscape Apprentice from Connolly. Connolly then played an unkicked Benalish Lancer and wasn't willing to trade with the Zombie when Doecke sent it in again on turn 4. Connolly's turn 4 play of a Glimmering Angel was answered by a turn 5 play of a Faerie Squadron from Doecke.

After assessing the board for a few minutes Connolly had to make a tough decision, he hadn't been able to draw an Island yet and he wanted to be able to protect his Angel after he put the cloak on it, but he was narrowly losing the life race. After some more think-time he shrugged his shoulders slammed down the Cloak and turned all his cards sideways taking the life totals to 19-9 in his favor.

A Hobble on Doecke's turn helped as the Angel could only be held back on defence and when he cast Zanam Djinn the turn after things looked bleak for Connolly. A Stormscape Apprentice joined the fray on Doecke's side and helped tap down the over enchanted Angel so the Zanam Djinn could put a dent in Connolly's life total. Over the next few turns Connolly managed to draw a Silver Drake and played a Cloak on it to stop Doecke from tapping all his creatures but Doecke tapped the Drake in the end step. He then untapped, attempted to play Defiling Tears on the Angel and when it was Confounded by Connolly's only blue source he tapped it in his mainphase and attacked for the win. 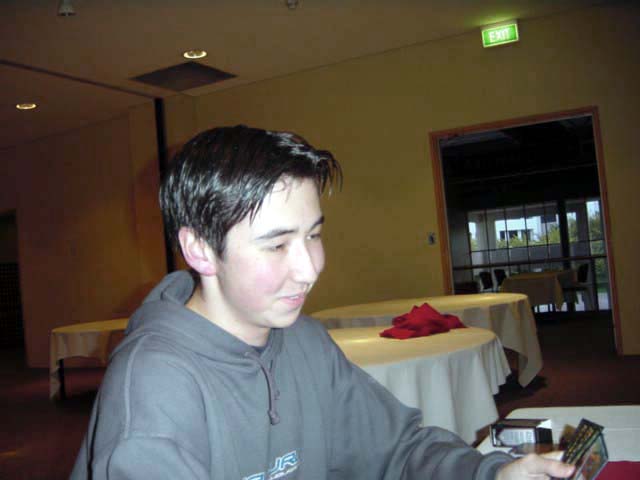 Starting off the game with a mulligan the second hand for Connolly was much better but it had 2 plains as his only land. He decided he couldn't mulligan again as he had an Armadillo Cloak in hand, but unfortunately for him he missed turn 3 and 4 land drops. Doecke on the other hand came out of the blocks fast and firing with a 2nd turn Galinas Knight, 4th turn Aurora Griffin, 5th turn Dream Thrush 6th turn Cavern Harpy Recast Thrush, 7th turn Zanam Djinn.

When Connolly finally drew a land he was so far behind he had to Repulse and sacrifice Angelic Shield just to try and stay alive, not even a Cloak on the Djinn could save him and his life reached 0 10 turns into the game.