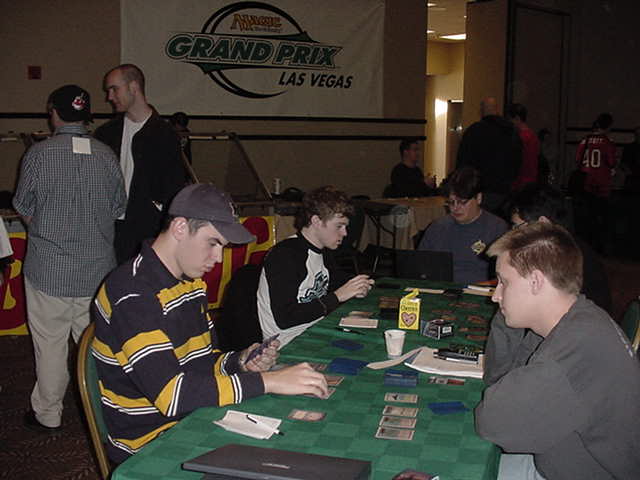 John Shuler leaned over to his friend Mike Flores, playing at the adjacent table, and complained "There's a chance for good to conquer evil here, but good's dumb friend comes along and jinxes me." Flores retorted that "they only gave us these feature matches because they know we're not going to be in contention later." Flores and Shuler are well known for having fun and for trying to figure out which one of them is actually the worst player on Tour. The last time Shuler ran into Chris Benafel was at Pro Tour New York. Shuler's team lost a controversial decision to Team ABU when Brian Kowal picked up a game loss for misrepresenting a spell after he had Benafel completely Legacy Weapon locked in game 3 of match 3. Shuler complained loudly and in print that someone on Team ABU should have gotten at least a game loss for unsportsmanlike conduct, since they picked up half a dozen warnings. The matchup was Benafel's Donate versus Shuler's Holistic Wisdom control, with Accumulated Knowledges. The general wisdom after New Orleans is that Donate should be vulnerable to other decks with A.K.'s because Donate can't go off without Intuitioning for them and then the other deck will get a significant advantage by playing their own A.K.'s afterwards. Game 1 went according to plan for Shuler. After Benafel used Merchant Scroll to fetch up some A.K.'s, Shuler countered the third and then played his own to draw 4 extra cards. Benafel then had to Intuition for Force of Will to try to force through his last A.K., but Shuler had a Force of his own to back up his Counterspell. When Shuler, untapped, he played Accumulated Knowledge for 8 and got to discard all his anti-creature cards and excess land. On his next turn Holistic Wisdom hit the board and Shuler began to show that his deck could abuse Accumulated Knowledge even better than Benafel's. Benafel conceded two turns later with 23 minutes left in the round.

Flores leaned over to ask who won and Shuler replied "the good guys ... it's always great when the good guys win." When Benafel smirked at him, Shuler softened a bit, crediting Benafel with being "the goodest of the evil." 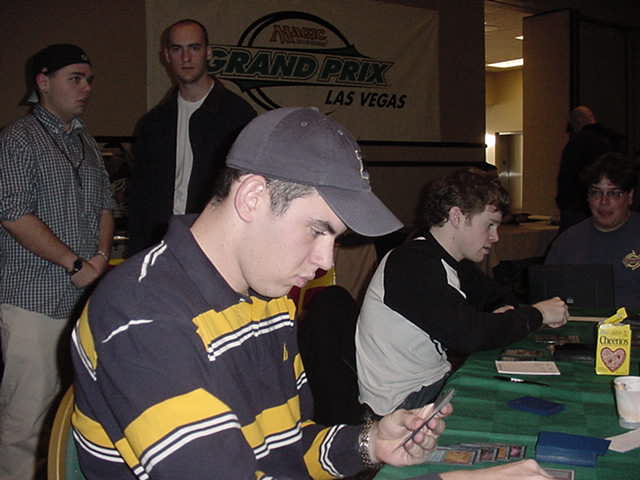 Benafel sideboarded into a Morphling control deck, but had to Intuition for land twice in the early game. That helped him in the short run, but forced him to try to win quickly since he would definitely get out-landed in the long game. Shuler won the permission war over the first Morphling and with Benafel tapped out Shuler dropped Holistic Wisdom. However, no one had any A.K.s in the 'yard and Shuler wasn't really able to abuse his Wisdom. All he could do was start the clock with Call of the Herd. Benafel baited a counter with Stroke for 4 and then was able to force through Ruination. Every one of Shuler's lands was nonbasic so his board while Benafel got to keep 5 basics. Benafel sped up his play dramatically, but he wasn't able to find a Morphling until the turn on which time expired. He didn't have enough extra turns to attack 4 times.