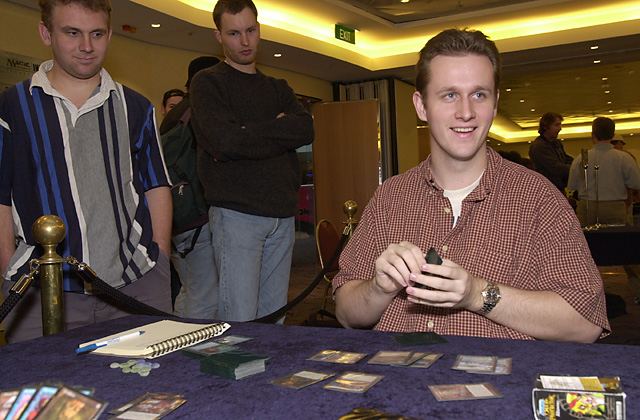 Jon Finkel, who may be best known for coming in third at PT Columbus (Juniors), was faced up against Bob Maher who was one match short from being the Magic World Champion earlier this year. Jon had selected Tempest, Visions and Destiny to build his deck while Bob had gone with Tempest, Visions and Alliances. Despite only being one set different, their decks were wide apart in theme and structure. Jon was playing mono-blue with Whispers of the Muse, Masticore and Rainbow Efreet along with Grindstones and Thran Foundry in the sideboard for other control decks. Bob used Humility and Kjeldoran Outpost to attain board control with counterspells to back it up and Browse and Soldevi Digger in the sideboard.

Bob was not confident going into this game and both he and Finkel agreed that his chances were extremely poor. They did differ on how long it would take - Finkel thought it would take a while, but Bob was pretty sure he'd get defeated quickly.

Jon's opening hand contained two Whispers of the Muse, Legacy's Allure, Capsize and four lands. He played the Allure on turn two only to have it disenchanted. Bob attempted a quick Outpost, as he knew Jon only had three Wasteland in his deck, but Jon had two of them in his hand. But instead of destroying the 'Post, Jon played Masticore and started beating down. Bob played Scroll Rack and started looking for answers as Jon played a second Wasteland to remove the Outpost. Bob was disgusted with how lucky Jon was with Wastelands and tried to play a Humility to control the 'Core. Jon attempted a Power Sink but Bob had Force of Will to back it up. Jon played a second Masticore but Bob had the other half of the combo as Orim's Prayer came into play. It looked like Jon may have lost his momentum but he Capsized the Humility at the end of Bob's turn and attacked for six, and after Bob cast Humility again, Jon Capsized it again and finished him off.

The first game had not improved Bob's confidence at all and his mental state obviously had him as having lost already. When he made a small mistake he was very hard on himself and he seems resigned to losing, but it could have all just be a ruse as just when it looks like he's out of it he starts casting spells and trying to get right back in. Never trust Bob Maher when he says he's losing!

The sideboarded match-up was all about Grindstone as each of them played one on the first turn. Bob followed that up with a Soldevi Digger. Jon Wastelanded Bob's Wasteland, and Bob made a risky play as he sacrificed his last land to bring in an Outpost and used the two mana to disenchant Jon's Grindstone. Jon had another Wasteland and Bob found himself on turn five with no land in play.

After that it was just a matter of time as Jon Dismissed Bob's attempts to Impulse. Bob kept trying to get back into the game but Jon never had less than two counterspells of some sort in his hand. Jon began to cast Whispers of the Muse with the buyback and Bob knew he was dead but he kept fighting. Eventually they both had two Grindstones in play but Jon also had two Thran Foundrys and a Powder Keg giving him definite board advantage.

Bob ran Jon out of cards but Jon just used the Foundry to rebuild his library and slowly but surely put Bob's library into the graveyard for the win.